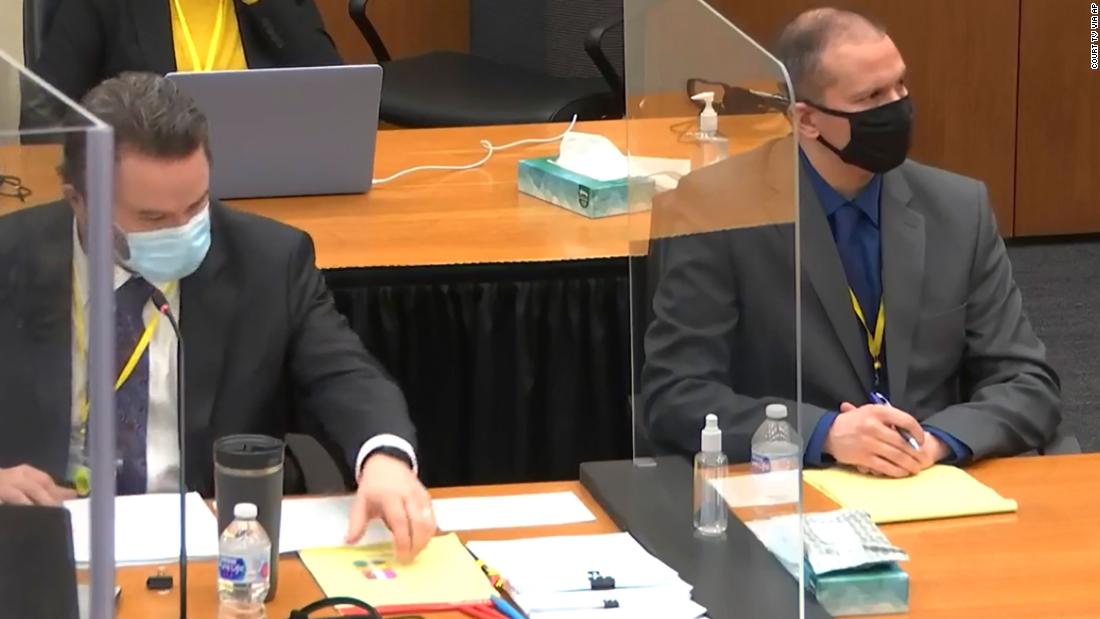 As of midday Tuesday, six men and three women have been chosen to serve on the jury during the trial in Minneapolis. Of the nine jurors, five are White, two are Black, one is Hispanic and one is mixed race, according to how the court says the jurors identified themselves.
The jury selection process, which began March 9 at the Hennepin County Government Center, will continue until the court decides on 14 people — 12 jurors and two alternates, Hennepin County Court director of communications Spenser Bickett told CNN.
Floyd, a 46-year-old Black man, died on May 25, 2020, after Chauvin, a White former Minneapolis Police officer, placed his knee on Floyd’s neck for an extended period while Floyd pleaded, “I can’t breathe.” His final moments were captured on video, and his death led to widespread protests against police brutality and racism under the banner Black Lives Matter as well as incidents of unrest and looting.
Chauvin has pleaded not guilty to second-degree unintentional murder and second-degree manslaughter charges. He has also pleaded not guilty to third-degree murder, which was reinstated in the case on March 11.
Opening statements are expected to start no earlier than March 29, followed by testimony that could take about four weeks.

The jurors all come from Hennepin County, which is demographically about 74% White and 14% Black, according to census data.
The prospective jurors have previously completed a 16-page questionnaire that asked for their personal thoughts on Black Lives Matter, policing and other topics. In court, each person is sworn in and then questioned one-by-one in a process known as voir dire. The juror’s name, address and other information are kept anonymous.
Eric Nelson is questioning the prospective jurors for the defense, while Steve Schleicher is questioning them for the prosecution. Judge Peter Cahill is presiding over the trial.
Seven jurors were selected in the first four days of jury selection last week. Two jurors were selected on Monday.
The first seven jurors chosen are not finalized. The court plans to question on Zoom each of the first seven jurors selected to ask what they heard about the city’s $27 million settlement with Floyd’s estate and if it impacts their ability to be fair and impartial in the case.
The first juror selected was a White man in his 20s or 30s who works as a chemist and said he has an analytical mind.
The second juror was a woman of color who appears to be in her 20s or 30s, according to a pool reporter’s observations in court. She said she was “super excited” about getting the jury questionnaire form.
The third juror selected was a White man in his 30s who works as an auditor.
The fourth juror was a White man in his late 30s or 40s who said he had a “very favorable” view of Black Lives Matter. He also said he believed police are more truthful than other witnesses. The juror is planning to get married on May 1 and told the court that if he was selected for the trial it could delay the wedding.
“Go ahead and throw me under the bus with your fiancée,” the judge joked. The juror replied, “OK, I will do that.”
The fifth juror selected was a Black man in his 30s or 40s who moved to the US 14 years ago and works in information technology. He said that he had a “somewhat negative” opinion of Chauvin, that he strongly disagreed with defunding the police and that police make him feel safe.
The sixth juror was a Hispanic man in his 20s or 30s, according to the pool reporter’s observations. The man, who works as a truck driver, said Chauvin “gave me the impression of showing off his authority” in the video of Floyd’s death, and he also said none of this would have happened if Floyd had complied with police.
The seventh juror is a White woman in her 50s, according to the court. She said she has a “somewhat negative” impression of Chauvin, and believes there are biases against African Americans but not everyone in the system is bad. She said she felt empathy for Floyd as well as the officers because “at the end of the day I’m sure that the intention was not there for this to happen.”
The eighth juror chosen is a Black man in his 30s, according to the court, who said he had very favorable views of Black Lives Matter. He also said he thought Chauvin had “no intention” of harming anyone, but he said he could put that opinion aside in this case.
The ninth juror selected is a White woman in her 50s, according to the court. She had a “somewhat negative” impression of Chauvin and wrote she “got the impression he didn’t care about” Floyd.

If the defense or prosecution believes a person cannot be impartial in the case, they can ask the court to dismiss the person for cause. Each side has unlimited challenges for cause.
Prosecutors and defense attorneys can also move to dismiss prospective jurors without cause, using what’s called a peremptory challenge. Chauvin’s team is allowed 15 of these challenges and the prosecution has nine. These peremptory challenges can themselves be challenged, though, if they are based on race, ethnicity or sex — known as a Batson challenge.
The defense has used 11 peremptory strikes and the prosecution has used five as of Tuesday.
The defense has generally used its strikes on people who expressed negative views of Chauvin and positive views of Black Lives Matter, while the prosecution has generally used its strikes on White people who expressed support for police.
The defense used a strike Tuesday on a man who appeared to be in his 30s or 40s. The man told the court he knew about the $27 million settlement between the city and Floyd’s family and the reinstatement of third-degree murder charges against Chauvin.
The potential juror had a “very negative” impression of Chauvin and wrote in his questionnaire that “George Floyd had been murdered by police officers.”
He told the court he could apply the presumption of innocence, but “it’s a really tough thing for me to do.”
While the defense used a peremptory challenge on the man, after the lunch break they asked for the strike to be returned and for the judge to strike the juror for cause.
Nelson, the defense attorney, said the judge should approach any potential juror who knows about the settlement agreement or pre-trial plea agreement discussions from a position of prejudice.
Prosecutor Steve Schleicher responded that the worry over the $27 million settlement is overblown, and the defense is asking the judge to presume the potential jurors are lying.
While Judge Cahill said he would not return the defense strike, he also wouldn’t disregard what a juror says simply because they use the “magic words” that they can be fair and impartial.

CNN’s Brad Parks and Carma Hassan contributed to this report.