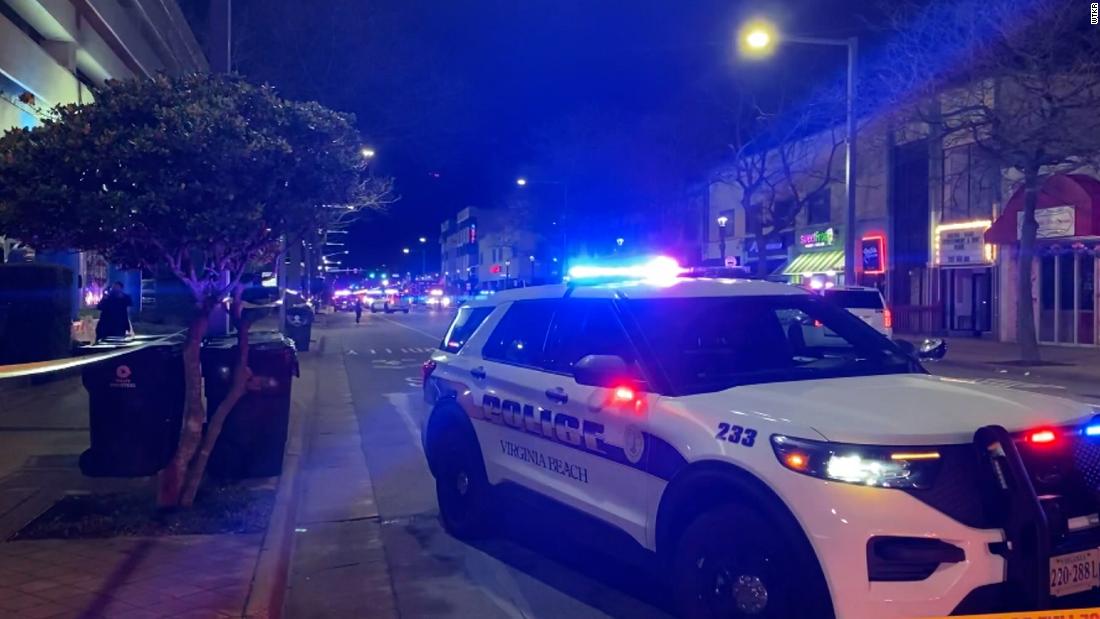 “The officer was wearing a bodycam, but for unknown reasons at this point in time, it was not activated,” Virginia Beach Police Chief Paul Neudigate said at a news conference Saturday night.
Virginia State Police have not released the identity of the officer who fired the shot that killed Donovan Lynch, a 25-year-old Black man.
“I do not have the answers that the community is looking for in regards to this death right now,” Neudigate said. He added that they have not yet interviewed the officer involved in the shooting and don’t know why the body-worn camera was not turned on.
Lynch was killed in the 300 block of 20th Street, a block away from where 28-year-old Deshayla Harris died in a separate shooting, according to police.
The chief pushed back on reports that Lynch was unarmed, saying, “What I can tell you is that there was a firearm recovered in the vicinity of where this incident occurred.”
The officer involved in the man’s fatal shooting is being placed on administrative assignment during an investigation, which is standard procedure, according to police.
The Commonwealth’s Attorney’s Office is investigating the incident along with the Virginia Beach police, but Neudigate said there were no immediate plans to ask the Virginia State Police to conduct an independent investigation.

A total of 10 people were injured by gunfire, including the two who died, in three separate shootings on Friday in Virginia Beach , police said.
Three people have been arrested in connection with the first shooting that is unrelated to the two separate shootings that killed Lynch and Harris, police said.
The shooting appears to have resulted from a fight among a group of people on Atlantic Avenue, police said in a press release Saturday afternoon.
“We now know that that started out as a physical fight, an argument into a physical fight, that at some point escalated into gunfire,” Neudigate said.
Three men, ages 22, 20, and 18, were arrested and each charged with seven counts of felonious assault, use of a firearm in commission of a felony and reckless handling of a firearm in connection with this incident, according to police. No one died at the scene of the first shooting on Atlantic Avenue, police said.
As officers responded to the Atlantic Avenue incident, police heard more gunshots nearby and found Harris shot. She died at the scene, police said.
Neudigate said police believe Harris was “an innocent victim probably struck by stray gunfire” unrelated to the officer-involved shooting.
Nearby, the shooting involving Lynch occurred when a uniformed officer “encountered an armed citizen which resulted in a police involved shooting,” according to a press release from the department. Lynch died from his injuries at the scene, police said.
At some point while all of this was going on, a VBPD officer was hit by a vehicle, according to the release. The officer has been treated and released from a nearby hospital.
Local hospitals in the Virginia Beach area received 10 victims of the multiple shootings but it is unclear if these included injured people who were not shot.
Police say more officers are being assigned to the Oceanfront Resort Area through the remainder of the weekend.
US Sen. Tim Kaine, D-Virginia, said his “heart is with Virginia Beach today” on Twitter.
“I feel sick at the news of yet another senseless mass shooting — in a community already scarred by the scourge of gun violence,” he said. “We cannot stand by as more families lose loved ones. The time for Congress to act on gun violence is NOW.”
Share

The teens assaulted a staff member and took th

The Texas Court of Criminal Appeals ruled on W