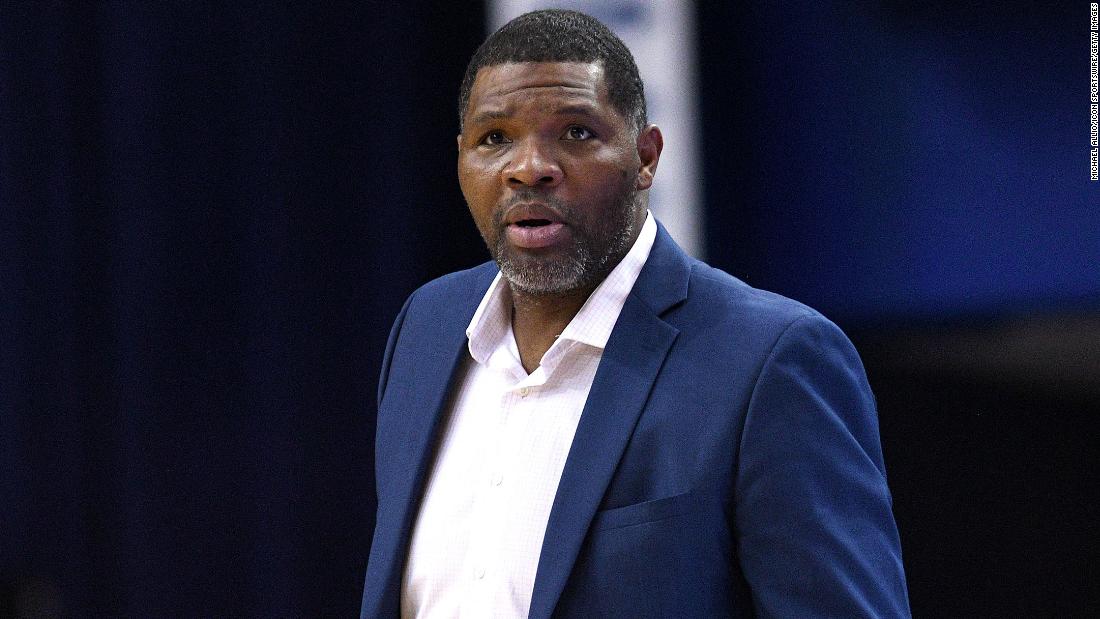 The suit alleges that McCarty, a former NBA player, pressured the unnamed plaintiff, dubbed Jane Doe, into visiting him in his home in December 2019, where he allegedly assaulted her, and that the University of Evansville knew of McCarty’s “insidious” pattern of sexually harassing and assaulting other women at the university but failed to act appropriately.
McCarty is not a defendant in the lawsuit against the school.
Michelle Simpson Tuegel, one of the attorneys representing the former athletic trainer told CNN that her client did not want to be named in the lawsuit due to the sensitive nature of the allegations.
The harassment and the university’s action, the lawsuit claims, violates Title IX protections for students against gender discrimination and violence. Because of the alleged assault and continued harassment, the lawsuit says, the unnamed victim suffered PTSD and for the first time saw a decline in her academic performance.
The University of Evansville “disputes the legal claims from Jane Doe and her attorney,” according to a statement.
“The University is confident it responded appropriately to all reports of misconduct regarding Mr. McCarty based on information it actually knew at the time,” university spokesperson Holly Smith said. “UE looks forward to addressing the specific allegations in court, not in the media.”
When reached by email, McCarty told CNN, “I’ve never assaulted anyone in my 47 years on this earth.”
“I am certain my name and reputation will be restored when it’s our time to do so and present the truth,” McCarty added. “I fully support the #metoo movement and the woman who have survived sexual violence. It’s disheartening that someone would make up such a vicious lie to gain financial rewards.”
Tuegel told CNN that her client has also filed a civil claim against McCarty in Massachusetts, where he resides. Court records indicate she has filed a proof of claim and sent his counsel a demand letter, and, on Tuesday, the court granted her an extension until June to file a complaint.

‘I told u I wanted to stop’

McCarty was hired as head coach in March of 2018. His previous basketball career made him an influential figure in the school and the community, the complaint said.
But quickly, reports were made of inappropriate behavior, the lawsuit alleges. The lawsuit notes at least seven times before the victim’s report that the University was made aware of behavior ranging from uncomfortable attention paid to a student to persistent, harassing text and social media messages.
The unnamed victim was unaware of these incidents when she became the student athletic trainer for the basketball team, the lawsuit alleges. She had never interacted with the coaches very much on the other teams she had worked with, but McCarty often spoke with the student athletic trainers and did special handshakes, according to the complaint.
Then, during final exams in December 2019, McCarty sent the student multiple messages asking her to come to his home, saying “I’m gonna kidnap you one of these times lol have u come hang with me,” the complaint alleges.
“Feeling pressured, while out picking up fast food, Jane Doe agreed to eat her food at McCarty’s house for five minutes,” the lawsuit says.
The lawsuit then alleges that McCarty sexually assaulted the student, and that at 5’1″ tall, she was afraid to run from the 6’9″ coach.
In the following days, McCarty continued to contact her, and the student confronted him, the lawsuit alleges.
“Why did u do what u did to me . . . I told u I wanted to stop and u kept goin,” she texted, according to the complaint.
The lawsuit alleges that the victim informed her roommate about what had transpired immediately after the incident took place. Three days later, she says that she spoke to a counselor and filed an anonymous report online with the university through Crime Stoppers that same day.
According to the Evansville Courier & Press, police say they had not received any reports regarding McCarty’s behavior during his coaching tenure.
After speaking with a counselor, the unnamed victim reported the incident to the university, according to the documents.
McCarty attended high school in Evansville and won a national championship as a player for Kentucky in 1996, before being drafted by the New York Knicks. He spent most of his 10 years in the NBA with the Boston Celtics. He also played for the Phoenix Suns and Los Angeles Clippers before turning to coaching.
McCarty was placed on administrative leave by the school about two weeks after the incident allegedly took place. And after the school hired an outside firm to conduct an investigation, he was fired in January 2020.
At the time the university said it had received additional reports of alleged misconduct by McCarty. The school said it had issued warnings to him in 2019, regarding inappropriate off-court behavior with members of our campus community and that he had also participated in Title IX behavioral training.
“There is no place at UE for any behavior by any University employee or student that jeopardizes the safety and security of others,” reads the school’s statement.

‘They sat on their hands and did nothing’

The university was made aware of several acts of misconduct before McCarty is alleged to have assaulted the student, but he was not monitored or followed up with after verbal admonishment, according to a release from the lawyers representing the victim, Michelle Simpson Tuegel and Jeff Gibson.
Tuegel said it was “stunning” that the university had “shrugged off” multiple complaints about McCarty.
“It was no secret to university officials that McCarty was a predator, and they sat on their hands and did nothing,” she said.
Tuegel has worked on other cases involving sexual abuse in team sports, including those involving disgraced former USA Gymnastics doctor Larry Nassar.
“It is a perfect combination and a perfect storm of vulnerability,” Tuegel said of the age and gender disparity between the alleged victim and McCarty. “It’s about Walter McCarty and his abuse, yes. It’s also about the failed institutional response and how they could have prevented this.”
Share

Denmark has reported that two hospital staff me

The National Football League has offered the us