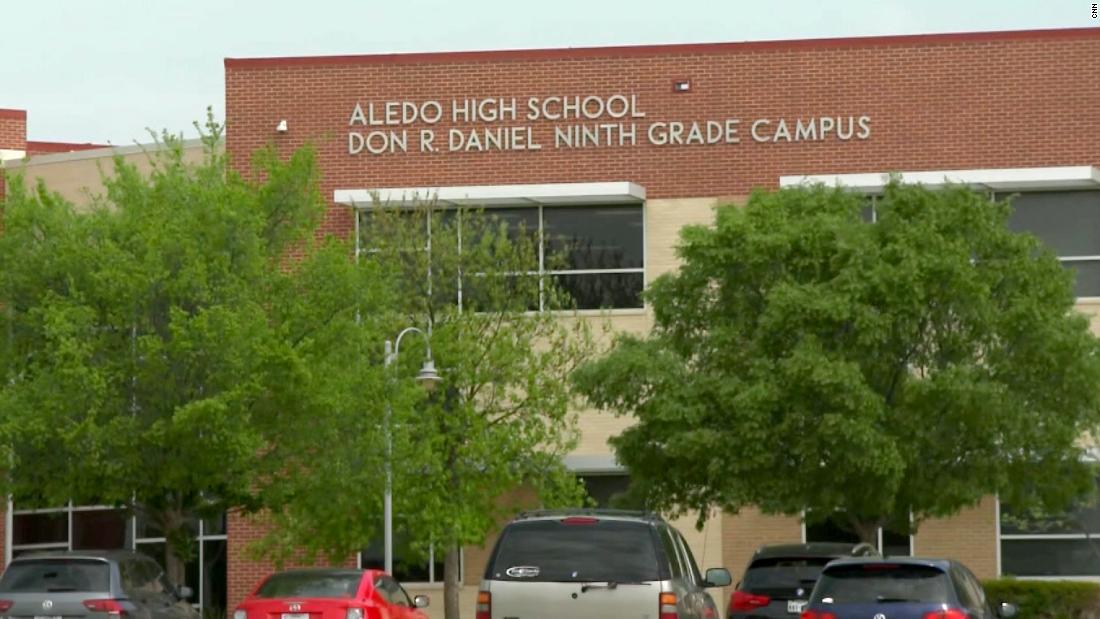 The group, called “N***** Auction” on the app Snapchat, was started by a handful of students at the Aledo Independent School District, just outside of Fort Worth.
One student bid $100 on one student, according to a screenshot of the messages. Another wrote “1$ on Chris. Would be better if his hair wasn’t so bad.”
The district initially described the chat as “cyber bullying” with “racially charged” language in an April 5 letter to parents, but ultimately labeled it “racist” after generating backlash from some Aledo residents.
The students involved are being disciplined, the district said in a statement last week, but could not reveal exactly what that discipline is, due to legal reasons.
“I know I speak for our entire Aledo community when I say that I am deeply sorry that a few of our students engaged in racial harassment of two of our students of color in a social media chat,” a message from the district sent Saturday read. “I am also deeply sorry for the hurt that it has caused the victims and their families. It was totally unacceptable to all of us, and it should not have happened.”
Aledo ISD is home to more than 6,000 students, about 78% of whom are White.
Some members of the community, including Eddie Burnett, president of the NAACP Parker County, said this moment needs to be a wake-up call for the town.
“I’m not saying that they are teaching racism (at Aledo), but there’s obviously an environment where that flourishes,” Burnett told CNN.

The incident isn’t the only racist occurrence the district has seen.
A week after the Snapchat auction came to light, fliers announcing a “Great Sale of Slaves” appeared at multiple campuses in the district.
In a statement, district officials said the Aledo ISD Police Department is reviewing security footage and investigating the situation.
Burnett said there have also been issues at other schools in the general area, citing an incident in 2018 where a noose was found hanging at Weatherford High School, less than 15 miles away from the Daniel Ninth Grade Campus, where the Snapchat incident took place.
“Now they’re not pulling people out of cars and attacking people on the sidewalk, and stuff like that,” Burnett said. “But to say that Parker County and Texas in general, doesn’t have a racial problem says to me that you’re not paying attention.”
At a school board meeting this week, one parent, who only gave her first name, Maria, recounted a time when a group of students tackled her 8-year-old to the ground during a game of cops and robbers.
Her son told them he couldn’t breathe, and one of the children said “Hey, put your knee on his neck,” Maria told the board.
“These were not high schoolers. There were Aledo elementary school students,” she said. “I think it’s important to share these things because the horrible actions of a few 9th grade students is not an isolated incident.”

Calls for a ‘change in behavior’

Chris Johnson, one of the students of color identified in the auction chat, spoke about the incident Monday at the school board meeting.
In his brief comments, Johnson said neither the school board nor the district have apologized to him or admitted to handling the incident “wrong at first.”
“The only apology I’m accepting is a change in behavior,” Johnson said. “I know the communities are ready for change, and we will do our part. Now I’m asking the board of trustees and the superintendent: When will you make the changes needed to ensure all of us feel treated fairly and safe?”
Incidents like the racist Snapchat group can be dismissed as a joke, Burnett said, but it reveals that these students don’t understand the weight of racism.
“It is dehumanization, and whether consciously or unconsciously, that is the purpose for doing it,” Burnett said. “So thinking of the students in this Snapchat … as just slaves … it’s dehumanization, and it allows the perpetrators to see them and do to them however they want.”
Moving forward, Burnett said he hopes the students involved and the community at large moves toward real change, rather than letting the situation blow over.
“The one chance we have to correct this situation is to shine sunlight on it,” he said. “Bring it to everyone’s attention, and have people put pressure on the community leaders, not just in the government, the community leaders all over to tackle the problem.”
Share