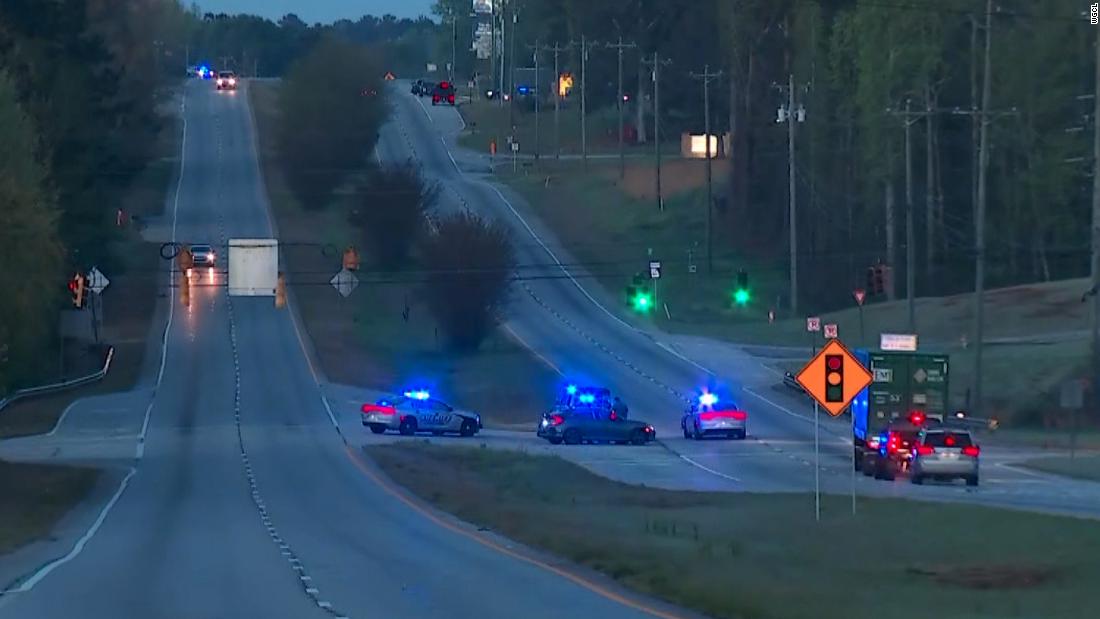 The officers from the Carroll County Sheriff’s Office and Carrollton and Villa Rica police departments were taken to hospitals in Atlanta, authorities said at a news conference.
The chase began when a Georgia state trooper clocked a car traveling 111 mph on Interstate 20 near Bremen around 3:30 a.m. Monday, Capt. Brandon Dawson of the state patrol said at a news conference. The trooper pursued and the car stopped, then drove away, Dawson said.
The trooper used his vehicle to force the car to stop beside the road, but the driver regained control and “continued to run,” Dawson said.
“His passenger used a rifle and shot at the trooper’s patrol car, striking it and disabling it,” he said. Local agencies took over the pursuit.
The two suspects continued into Carroll County on Highway 61 when the passenger “leaned out the window and fired rounds” into a Carrollton police officer’s vehicle, resulting in an officer being struck, said Carrollton Police Chief Joel Richards. The Georgia Bureau of Investigation identified the officer as Sgt. Rob Holloway.
“Sergeant Holloway continued the pursuit until he wrecked his patrol vehicle at the intersection of Highway 61 and Highway 166,” the GBI said in a news release.
Richards said Holloway was flown to Grady Memorial Hospital in Atlanta for surgery.
The suspects drove at a high rate of speed into Villa Rica and crashed near an elementary school, the GBI said. Both men ran from the vehicle and officers began searching for them, the GBI said.
Between 5 and 5:30 a.m., the men shot at the officers, hitting Villa Rica Police Officer Chase Gordy and Carroll County Sheriff’s Deputy John Repetto, the GBI said.
Langley said one of the suspects was arrested “after a negotiation” and is being held in the Carroll County Jail. The other suspect was killed, but Langley didn’t specify how.
“There are no suspects at large,” Langley said.
Gordy was transported to Grady Hospital, Villa Rica Police Chief Michael Mansour said.
Carroll County Sheriff Terry Langley said Repetto was taken to Atlanta Medical Center with a gunshot wound to the arm. Repetto was released from the hospital Monday afternoon, the GBI said.
The GBI identified the suspect in custody as Aaron Jajuan Shelton, 22, of Birmingham, Alabama, and said he was at the Carroll County Jail. His brother, Pier Alexander Shelton, is the suspect who was killed, the GBI said.
Shelton is being charged with three counts of aggravated battery and five counts of aggravated assault, the GBI said.
Shelton is not listed in the county’s online jail records and CNN has not been able to determine whether he has legal representation.
The GBI said it has taken over the investigation at the request of the state patrol and the sheriff’s office.
The case file will be submitted to the District Attorney’s Office when complete, the GBI news release said. The GBI’s investigation includes the officer involved shooting and the aggravated assault on the officers, it said.
Share

Racer Leh Keen was the driver and crushed the