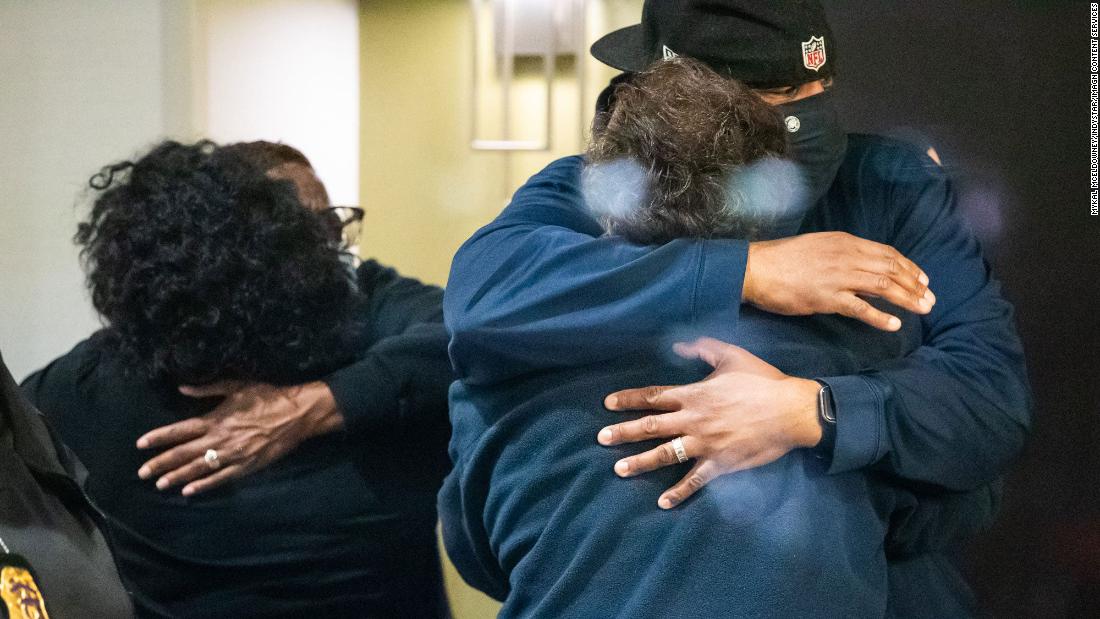 CNN previously reported that in March 2020, Brandon Hole’s mother told law enforcement he might attempt “suicide by cop,” according to the FBI.
A shotgun was taken into custody at Hole’s home, Marion County prosecutor Ryan Mears said on Monday. Hole was placed on an immediate detention mental health temporary hold, the FBI has said.
Yet Hole was able to legally purchase assault rifles in July and September 2020, Indianapolis police have said.
The case “illustrates the limitations” of state law, Mears said Monday.
Mears said the Jake Laird Red Flag gun law allows police to seize and hold firearms from individuals undergoing mental health issues, but the state only has 14 days to file a petition requesting a person be designated as having a violent propensity or mental instability.
Because the shotgun taken from Hole’s home had been secured and the family didn’t want it back, prosecutors felt they “achieved” the objective of the law, Mears said. If the state had filed a petition, the court might have determined prosecutors didn’t have legal authority to keep the weapon.
“In this particular case, the petition was not filed because the family in this particular case had agreed to forfeit the firearm that was in question and they were not going to pursue the return of that firearm,” Mears said.
Mears said the state didn’t have access “to anything to indicate that (Hole) had had a history or documented diagnosis of mental illness.”
“We have 14 days under the statute and because we have 14 days our ability to have access to meaningful medical history, meaningful mental health records, is severely limited.” Indiana law allows a person 30 days to respond to a subpoena, Mears said.
“I think it’s important to note that this case does illustrate some of the shortcomings that exist with this red flag law,” Mears said.
“The sad reality is that during the pendency of these matters there’s nothing prohibiting someone from purchasing a firearm, that’s just the sad truth,” Mears said.

The Bureau of Alcohol, Tobacco and Firearms traced the two assault weapons used in the shooting, and police learned Hole purchased one in July of 2020 and one in September of 2020, Indianapolis police said in a tweet.
Deputy Police Chief Craig McCartt said Indianapolis police found Hole’s name in two past incident reports. The deputy chief didn’t have information about the first report. The details he described from a 2020 report align with the FBI statement.
In a statement to CNN affiliate WRTV on Saturday, Hole’s family said it was devastated by the killings, noting, “We tried to get him the help he needed.”
Hole, a former FedEx employee, opened fire at the facility near Indianapolis’ main airport before taking his own life in a spasm of violence that lasted only a few minutes, according to police. Investigators are still trying to determine the motive behind the shooting.
This attack marks at least the 50th mass shooting — defined as four or more casualties, excluding the shooter — since the Atlanta-area spa shootings March 16. It is the US’s deadliest shooting since 10 people were killed March 22 at a grocery store in Boulder, Colorado.
On Friday night, Indianapolis police released the names of the eight deceased victims. They are: Matthew R. Alexander, 32; Samaria Blackwell, 19; Amarjeet Johal, 66; Jasvinder Kaur, 50; Jaswinder Singh, 68; Amarjit Sekhon, 48; Karli Smith, 19; and John Weisert, 74.
Four of the eight killed were members of the area’s Sikh community, Maninder Singh Walia, a member of the Sikh community in Indianapolis, told CNN on Friday.
Four individuals remained hospitalized Monday with injuries sustained in the attack, FedEx said.

Incident lasted only a few minutes

The shooting began when the gunman “got out of his car, and pretty quickly started some random shooting outside the facility,” McCartt said. The gunman then “went inside and did not get very far into the facility at all,” while shooting others there, he said.
FedEx employee Laveda Chester told CNN’s “OutFront with Erin Burnett” that she was in her car outside the building when she heard a pop.
“I thought it was a car crash, but then when I saw the gunman running towards the front door with his rifle, I immediately pulled off the parking lot and I called the police,” Chester said.
She waited until he went in so she could drive away without drawing the gunman’s attention. She called police from another parking lot and said she tried to warn other arriving workers that there was a shooting going on. Some stopped and some drove past her.
“My understanding is, by the time that officers entered…the situation was over — that the suspect took his life very shortly before officers entered the facility,” McCartt told reporters.
At least 100 people were in the facility when the shooting began, he said. Many were on their dinner break or changing shifts. Four people were found dead outside and four others, not counting the shooter, were dead inside, McCartt said.

While the shooter’s motive isn’t yet known, “he targeted a facility known to be heavily populated by Sikh employees, and the attack is traumatic for our community as we continue to face senseless violence,” said Satjeet Kaur, executive director of the Sikh Coalition.
That sentiment was echoed in a letter to the Biden administration Saturday, in which the Sikh Coalition wrote, “It was no accident that the shooter targeted this particular FedEx facility where he had worked and knew was overwhelmingly staffed by Sikhs.”
“The people that were shot and killed were not random targets,” the coalition said. “As such, we implore the Administration to ensure that this shooting is not simply dismissed by the media or law enforcement and acknowledge what it is — a deliberate act intended to inflict the most harm against diverse Americans.”
The Sikh community has grown in Indiana in recent years, Walia said. When he moved to the area in 1999, about 50 Sikh families were there. Hundreds more families have arrived since then, with many Sikhs having come to Indianapolis for economic opportunity and good schools, Walia said.
Two of the victims, Sekhon and Kaur, were relatively new to Indianapolis and were working the overnight shift at the FedEx facility when they were killed, said Rimpi Girn, an Indianapolis resident who knew them.
Sekhon, after immigrating to the US in 2004, moved to Indiana in 2019 from Ohio to be closer to family and relatives, said Girn, a close family friend. Sekhon leaves a husband and two sons, ages 13 and 19, Girn said.
Kaur, who immigrated to the US in 2018, was the breadwinner for her family, according to Girn. Sekhon drove Kaur to work because Kaur didn’t have a driver’s license, Girn said.
“They didn’t want to work night shift anymore,” and they were looking for day shifts with FedEx, Girn said.
As of late Sunday night, a verified GoFundMe campaign for the families of the victims set up by the National Compassion Fund has raised more than $1 million, with Fedex donating $1 million.
The fund said 100% of the donations “will go to the families and those affected by the tragedy.”
In addition to grief counseling and support resources, FedEx said it is in the process of providing direct financial support for funeral arrangements, hospital expenses and other needs.
Some of the families have also started verified GoFundMe campaigns following the shooting.