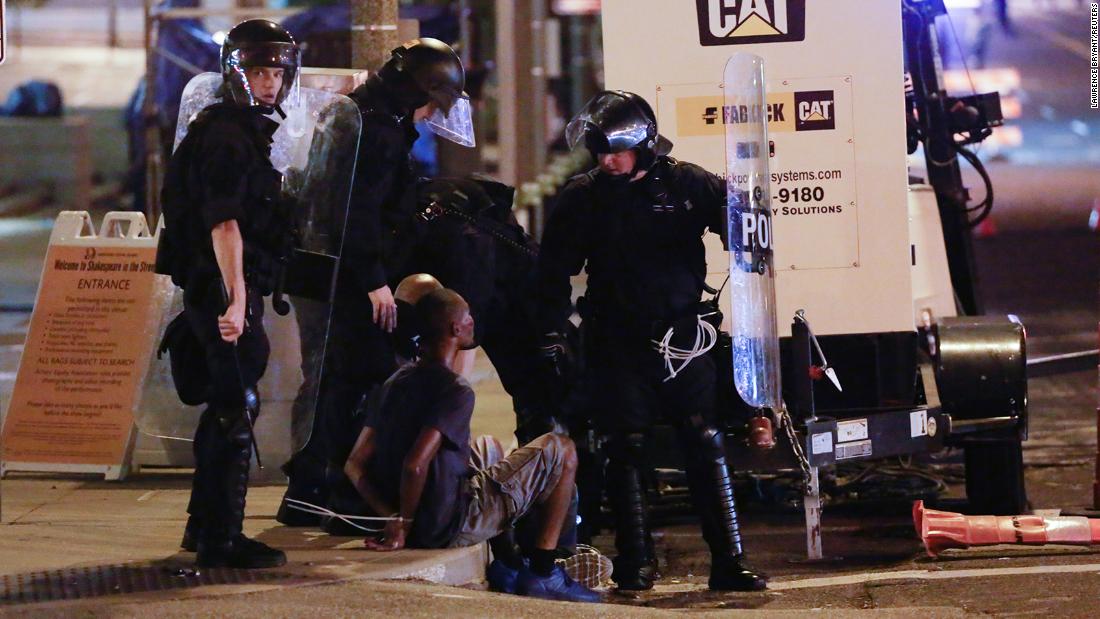 Luther Hall, who was identified in a civil suit he filed, went undercover in 2017 during a protest concerning another police shooting of a Black man. Hall, himself, is Black. His lawsuit states all the officers involved in the assault are White.
It was during the protests that officers allegedly assaulted Hall. His civil suit said the assault caused herniated discs, a rotator cuff tear, a concussion, a bruised tailbone, as well as “contusions, abrasions and other injuries.”
Four officers were indicted in 2018 in connection with the assault. Those four officers were identified as Dustin Boone, Randy Hays, Christopher Myers and Bailey Colletta.
A fifth officer, Steven Korte, was named by prosecutors as being one of three officers — along with Boone and Myers — who threw Hall to the ground and beat him.
On Monday, jurors returned a not-guilty verdict for Korte and Myers on a charge of deprivation of rights under color of law, according to CNN affiliate KMOV and KSDK.
A mistrial was also declared on that same charge for Boone.
Additionally, Korte was found not guilty of lying to the FBI. Myers had a mistrial declared on a charge of destroying evidence, the affiliates reported.
Colletta pleaded guilty on September 6, 2019, to the charge of making false statements to the grand jury. She was charged with lying to a grand jury and to investigators about what she witnessed that day. She will be sentenced on April 10, according to a US Department of Justice statement.
Hays also pleaded guilty on November 18, 2018, to deprivation of constitutional rights, according to the Justice Department statement.
CNN has reached out to attorneys for Hall, but emails and phone calls were not returned Monday. A US attorney’s office spokesman told CNN the office “has no comment, at this time, as the case is active pending re-trial.”
The Ethical Society of Police voiced its disagreement with Monday’s verdict in a statement.
“Police officers continue to escape the consequences of their actions,” ESOP says. “The criminal justice system continues to show African-American victims of police violence we do not receive the same level of justice when white police officers are accused of excessive force toward African Americans.”
ESOP describes itself as a group founded by African American police officers to address racial discrimination in the St. Louis city and county police departments.

Hall was working as an undercover protester

The case stems from a September 17, 2017, incident when officers were assigned to a Civil Disobedience Team, which conducts crowd control, in anticipation of a protest of the acquittal against St. Louis Officer Jason Stockley, who fatally shot Anthony Lamar Smith, a Black man, in 2011, according to a 2018 indictment.
Protests broke out over Stockley’s acquittal. Hall — a 22-year veteran on the force — was in the crowd with his partner working undercover as a protester to document crimes among the demonstrators so law enforcement could make arrests, according to Hall’s lawsuit.
During the protests, court documents allege that Boone, Myers and Korte approached Hall, threw him to the ground and violently beat him causing severe injuries that have required multiple surgeries. The 2018 indictment said officers were accused of kicking Hall and striking him with a baton.
Federal prosecutors say that Hall “was compliant and not posing a physical threat to anyone.” Hall’s civil suit notes that his partner, who is White, was also arrested during the protest but was not beaten or injured.
Hall “was an experienced undercover officer who specifically wore a shirt that revealed his waistband so that he would not be mistaken for being armed,” the indictment said.
When Myers, Boone and Hays learned Hall was an officer, the indictment says they made false statements justifying the assault. They were also said to have contacted Hall to dissuade him from taking legal action and contacted witnesses to try and influence their testimony.
Myers also destroyed Hall’s cellphone “with the intent to impede, obstruct, and influence the investigation,” according to the indictment.
Officer Colletta — who was in a romantic relationship at the time with Hays, the indictment said — was on the team that night and offered inconsistent explanations as to why they arrested Hall, according to the indictment. Her stories ranged from never having contact with Hall to him being taken in “very gently,” the indictment said.

CNN’s Madeline Holcombe and Keith Allen contributed to this report.

Anna Berger, a Delta flight attendant who was