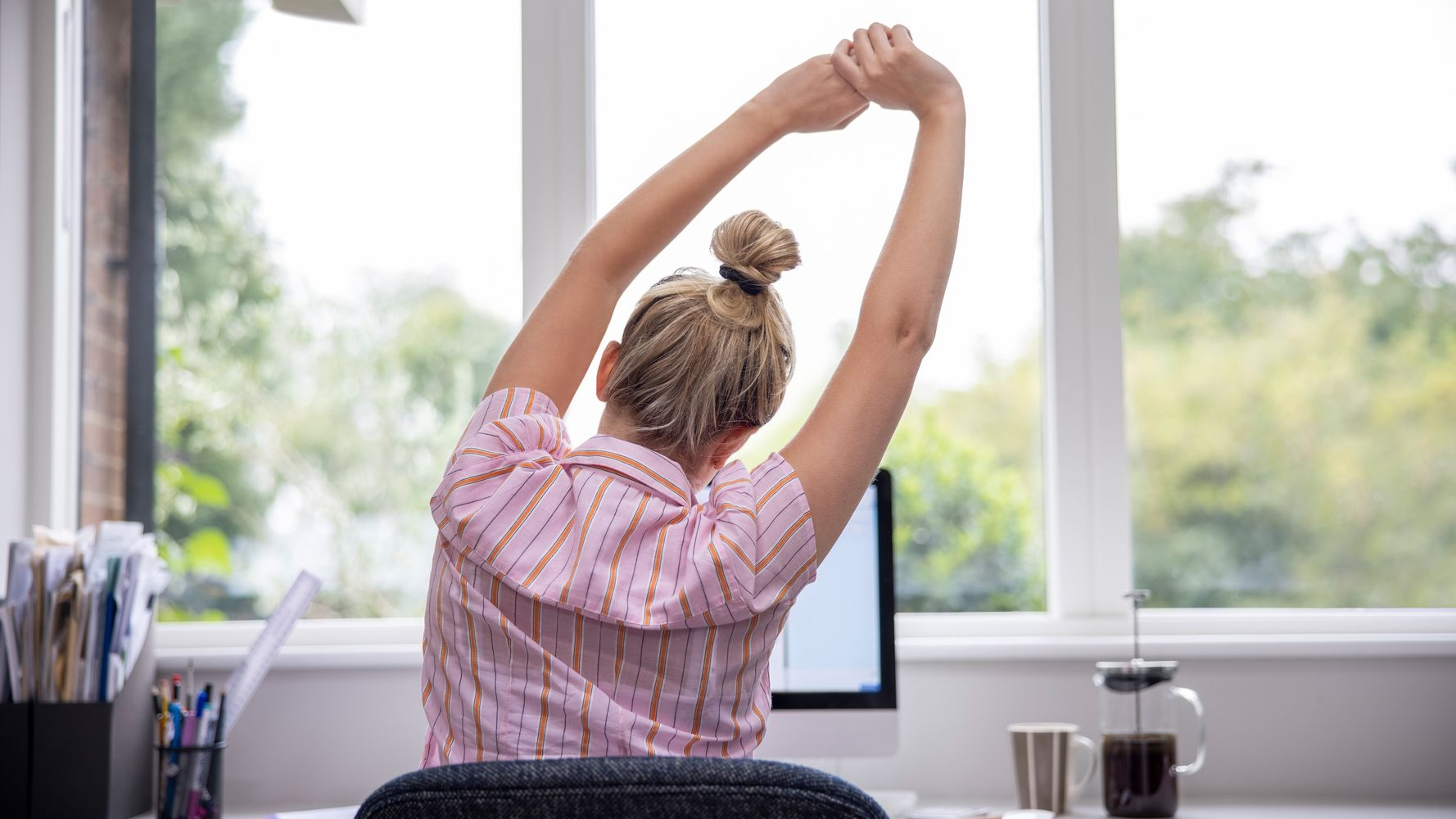 The idea that “sitting is the new smoking” has been around for several years now. It’s credited to James Levine, an endocrinologist and obesity researcher at the Mayo Clinic, who claims in his 2014 book “Get Up!” that we lose two hours of life for every hour we spend sitting.

In the building that houses my graduate school classes, there’s a room with two treadmill desks that staff and students are encouraged to use. In most office buildings, you’ll see standing desks, which are often marketed as the “end to unhealthy work environments” or as a way to combat back pain and weight gain.

But, credentialed as Levine may be, the claim that sitting is as harmful as smoking has always seemed far-fetched and a little clickbait-y to me. Like many others, I have a desk job. I’m fairly active in my leisure time, but there’s really no way around the fact that I must be idle for a good chunk of every day. So that’s one reason equating desk chairs to cigarettes doesn’t quite track — no one needs to smoke, but practically everyone needs to sit.

“Exercised,” a new book by paleoanthropologist and Harvard evolutionary biology professor Dan Lieberman, flips the script on ideas like sitting is the new smoking. “The basic argument of my book is that we make people feel exercised about exercise and physical activity,” Lieberman said. “We make them feel anxious and nervous and worried and confused because we give them all this bad information, and there’s a lot of value and judgment added to it.”

Oversimplifications (and straight-up myths) about movement can do more harm than good, Lieberman argues. This is especially true when it comes to that fearmongering one-liner on the harms of sitting.

Central to this sense of worry we have about sitting is the assumption that people living in less industrialized societies, past and present, sit considerably less than we do. Lieberman takes issue with this for several reasons.

“We get this idea that, ‘If hunter-gatherers do it, it must be good for us.’ That’s trash thinking. Unfortunately, it’s very common,” Lieberman said, citing the paleo diet as an example. “It’s a really, really bad way to think about applying evolution to health.”

Why? Because our ancestors didn’t evolve to be healthy, they evolved to reproduce and have as many offspring as possible. So, let’s stop trying to mimic their lifestyle habits in the name of health.

That said, it’s also not true that sitting is unique to industrialized society. “If you go and look at what [today’s] hunter-gatherers do, it turns out that they sit about 10 hours a day, too,” Lieberman said. “Your average hunter-gatherer out there who has no chairs and doesn’t have a desk job, they sit as much as most Americans.”

Many sit or squat on the floor, which engages a few more muscles than sitting in a chair, but is still a relaxed and restful position.

There are all kinds of conflicting statistics out there about how much we sit.

Information about the so-called dangers of sitting is often accompanied by some shocking statistic about how much time we Americans spend sitting every day.

“If you get online and Google ‘How much do Americans sit?,’ the first five or six responses will give you five or six completely, totally different answers,” Lieberman said. (I just Googled it and found a 2019 Washington Post article claiming that American adults sit six and a half hours per day, followed by a 2019 Forbes article that says 15 hours per day.) “People just make stuff up, or they pick the data that fits their argument.”

According to Lieberman, high-quality data that relies on accelerometers (electric sensors that measure acceleration and can tell when we’re sitting, standing and laying down) finds a ton of variation in how many hours people spend sitting. Some people are doing it far more than others, and even the sitting habits of individuals vary greatly from day to day ― particularly weekdays versus weekends.

Because of this, “there’s no one useful number” that applies to all of us, Lieberman said. Still, there are averages: Younger American adults sit about nine or 10 hours a day, while older adults sit as much as 12 to 13 hours a day.

The idea that sitting might be the new smoking is probably most alarming to those of us that have no choice but to sit for long periods at work. But, Lieberman’s book highlights some reassuring evidence. A 15-year cohort study of over 10,000 adults in Denmark found that sedentary work was not associated with an increased risk of heart disease; a cohort study of 66,000 adults in Japan had similar findings.

“It’s not so much that chairs are evil and sitting is really bad for you,” Lieberman said. “It’s that sitting too much is bad for you if you don’t also exercise.”

If you drive to work in the morning (sitting), sit at your desk all day, drive home (sitting), and then spend the remainder of your evening on the couch, that means you aren’t getting in much movement. “But it’s perfectly possible to be a physically active person and still sit for nine or 10 hours a day,” Lieberman said.

Getting up frequently is really beneficial, regardless of how much time you spend sitting.

There’s a reason why some people suggest after-dinner walks as a way to help with digestion. When your muscles are activated, even through light activity like walking or cooking, they take in sugar and fat molecules from your bloodstream to use as energy.

When you sit uninterrupted for long periods of time, those sugar and fat molecules stay in your bloodstream for longer, which is one reason some people argue that too much sitting raises your risk of type 2 diabetes.

However, you can mitigate this risk by simply getting up more often. Lieberman explained that in studies where researchers looked at the the duration of sitting bouts — that is, how long you sit without getting up — people who get up every 12 minutes have a much lower chronic disease risk than people who sit for upwards of 30 minutes at a time, even when they sit for the same amount of total time each day.

“The reason for that is that you’re basically turning on your muscles more often,” Lieberman said. “When you turn on your muscles, even if just a little bit, you reduce the amount of fat and sugar in your bloodstream, and your muscles are induced to produce anti-inflammatory molecules.”

He suggested getting up every once in a while to get water or a cup of tea, pet your dog, talk to a coworker, run an errand — whatever will get you out of your chair for a minute or two.

“It’s not so much that chairs are evil and sitting is really bad for you. It’s that sitting too much is bad for you if you don’t also exercise.”

Lieberman has a standing desk and said he uses it a fair amount. (Although not all the time — he used an accelerometer to measure his own patterns and found that he sits for an average of eight and a half hours per day.)

But, most people misunderstand the potential benefits of standing desks. First, there haven’t been any high-quality studies linking standing desks to reduced risks of chronic diseases. Second, while some people use standing desks in an attempt to prevent or lessen lower back pain, the evidence finds no significant association between sitting (slouched or straight) and back pain in the first place. Third, while they’re sometimes marketed as weight loss tools, standing burns just eight more calories per hour than sitting. (Plus, even activities that burn a significant number of calories aren’t strongly associated with weight loss.)

He equates standing to a more active form of sitting, like squatting or sitting in a chair without a back, because you have to engage some muscles to stay upright. So, a standing desk might have the same positive effect as getting from your chair every so often.

Sitting isn’t the new smoking. It’s possible to have a sedentary job and still get the recommended amount of physical activity and keep your risk of chronic disease relatively low (granted you’re engaging in other healthy behaviors like eating a nutritious diet, not smoking, managing stress and drinking moderately if at all.)

However, Lieberman’s argument isn’t that we should just cast aside the idea that too much sitting might be harmful.

“It’s true that physical activity is good for you and too much sitting is bad for you,” he said. “But instead of explaining why that may be, many health experts just demonize and oversimplify.”

Demonizing something as natural and necessary as sitting is unhelpful because it doesn’t provide an actionable solution. Plus, it stresses people out, which is decidedly bad for health.

Instead, Lieberman thinks that “people deserve more and better information. They can handle a little bit of complexity.” Instead of trying to distill the evidence on sitting down to one (scary!) sentence, a better approach would be to explain how and why too much sitting can be harmful, and then offering some realistic solutions: Get up from your desk a few times an hour, try a standing desk if you want, make time for physical activity before or after work.

Knowing this, people can adjust their habits for the better, instead of feeling overwhelmed by messages that make small changes seem futile.

Black people working on the front lines of the

Two people are dead after a recent COVID-19 out

Lisa Miller likens her mind to a sieve when “me