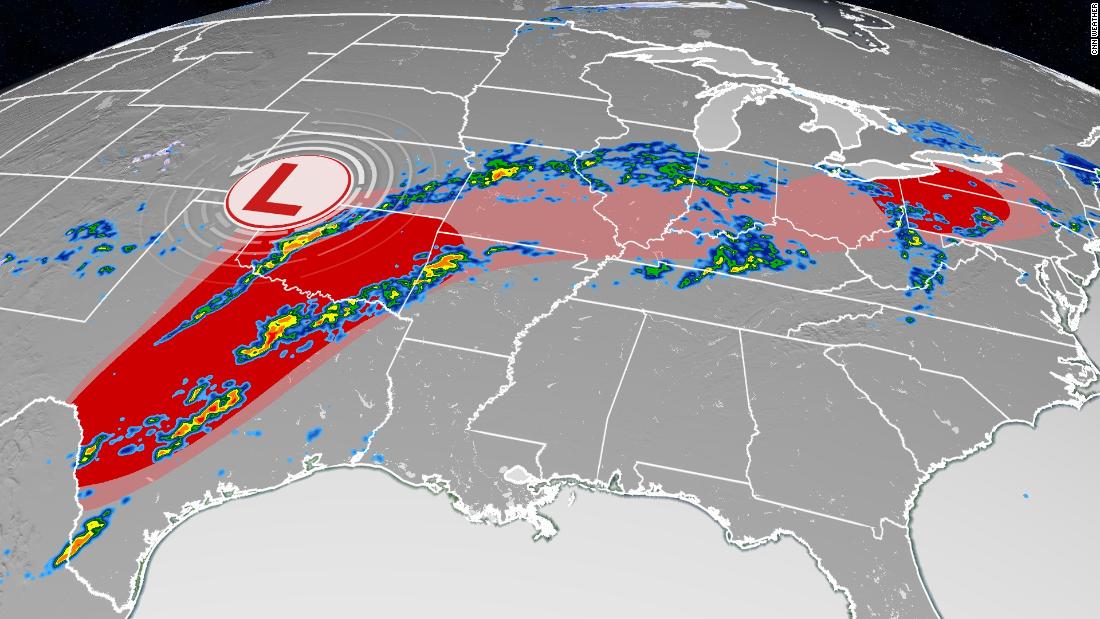 “Even though today may not look like a classic set up for a severe weather outbreak, there will be severe storms that break out from Texas all the way up to the Northeast,” said CNN meteorologist Chad Myers. “We often talk about the ingredients for big storms and today’s recipe includes an overabundance of warm air and humidity.”
This threat comes from the same storm system that caused tornadoes and very large hail across portions of the Plains Tuesday afternoon. Tornadoes were observed in Texas, Oklahoma and Colorado, while damaging hail, up to 3 inches in diameter, was measured in Texas and Kansas.
A tornado watch is in effect for southern portions of Missouri until 3 p.m. CDT. This means environmental conditions are favorable for some storms to produce tornadoes.

Severe storms and large hail are more likely today and tonight in central Texas, including Dallas and Fort Worth, where there is a level 3 out of 5, enhanced risk.
Hailstones could get up to 4 inches in diameter with some of these storms, according to the Storm Prediction Center. Hail of that size is like having thousands of softballs falling from the sky.
There is also a level 2 out of 5, slight risk for severe weather in 6 states in the South: Texas, Oklahoma, Arkansas, Missouri, Illinois and Kentucky. This means scattered severe storms are possible.
“The stronger thunderstorms may produce large hail and wind damage. A tornado threat may also develop in the Southern Plains,” says the SPC on today’s severe weather threat.
Track the storms with our storm tracker here>>>
The Southern Plains through the lower Midwest will deal with rounds of heavy showers and storms throughout the day and into tonight. This means severe weather is an all-day and all-night threat, and some locations could experience several severe storms.
Some of these thunderstorms could move over the same locations for several consecutive hours. This may cause flash flooding, especially across eastern Oklahoma, southern Missouri and northwestern Arkansas, according to the Weather Prediction Center.
“Locally heavy rainfall will be a bigger concern in our area by later today and tonight, with both flash flooding and main-steam river flooding possible depending on just where the heavier rain swathes set up,” says the National Weather Service office in Tulsa, Oklahoma.
Nearly 10 million people are under flood watches, meaning flooding is possible through tomorrow.
A widespread 1-3 inches of rainfall is forecast, with localized amounts of more than 5 inches possible.

There is also a secondary, elevated risk for severe storms in parts of the interior Northeast, especially the eastern Great Lakes region.
A level 2 out of 5 risk is in place for parts of Ohio, Pennsylvania and New York, including Cleveland and Pittsburgh.
Strong storms will begin to form in this region during the mid-to-late-afternoon hours, then ramping up in the evening. These scattered severe storms will remain a threat into the first half of tonight before weakening by the early morning hours Thursday.
Some of these storms could also produce isolated tornadoes, large hail and/or damaging winds.
Thursday, the risk for isolated severe storms will exist further east, from eastern Texas through Pennsylvania. Additional rounds of rain are expected, and flash flooding will be possible, especially from northeastern Texas through western Tennessee.

One of the ingredients fueling these severe storms Wednesday is the near-record warm daytime temperatures.
Over 200 million people in the US are forecast to have a high temperature of at least 80 degrees Wednesday, with that warm air reaching as far north as the New York City area and into portions of northern Ohio.
High temperatures in the Northeast will be up to 25 degrees above average, with cities like New York, Newark, Washington and Philadelphia all nearing record highs on Wednesday as temperatures near or hit 90 degrees.
In Philadelphia, the typical first day of the year when the city reaches 90 degrees is May 29. If it does hit 90 today, then that would be more than a month ahead of schedule.
The rest of the eastern US will have temperatures 5-15 degrees above normal Wednesday, but that area will shrink by the end of this week.
On Thursday, the East Coast will remain above average, and in some cases as much as 25 degrees warmer than normal in the mid-Atlantic.
While daytime temperatures will likely be just shy of breaking record highs in most cities, over two dozen record warm low temperatures overnight could be broken through Friday from the Midwest through the Northeast.
Behind the storms is a cool down with temperatures plunging down to 25 degrees below average across portions of the Southern Plains beginning Thursday and continuing through this weekend.
That cooler air will reach the East Coast by Friday or Saturday, with highs turning below average.
Meanwhile, in the West, temperatures will be warming up, with record warm overnight lows possible, this weekend. That warm air will likely shift back toward the eastern US early next week.

CNN’s Dave Hennen and Judson Jones contributed to this report

A new survey shows that 80% of Americans belie