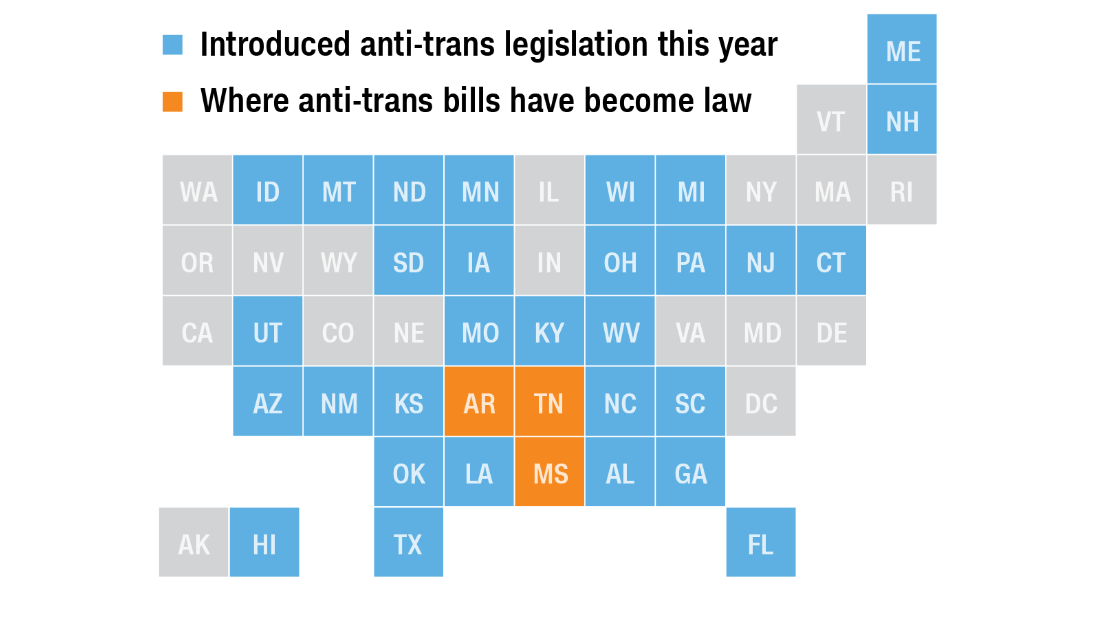 According to data from the Human Rights Campaign, one of the nation’s largest LGBTQ advocacy groups, at least 117 bills have been introduced in the current legislative session that target the transgender community. It’s the highest number the organization has recorded since it began tracking anti-LGBTQ legislation more than 15 years ago.
The majority of bills would affect transgender youth, a group that researchers and medical professionals warn is already susceptible to high rates of suicide and depression.
Here’s where these bills have been introduced, and the restrictions they seek to impose:

Thirty-one states have introduced bills that ban transgender athletes from participating in sports consistent with their gender identities. Three states — Arkansas, Mississippi and Tennessee — have already signed these bills into law this year. A similar 2020 law in Idaho was swiftly struck down in federal court.
In many states, lawmakers introducing these bills are supported by conservative legal groups, such as the Alliance Defending Freedom, which reportedly helped craft the Idaho law that was later struck down in court, according to the Idaho Press. The group released a statement praising Arkansas Gov. Asa Hutchinson. The Arkansas bill, named the “Fairness in Women’s Sports Act,” would prevent transgender girls and women from participating in school, intramural or club sports with their same-gender peers.
“I think that these exclusionary responses are a solution in search of a problem,” said Melanie Willingham-Jaggers, interim director of GLSEN, an LGBTQ youth advocacy organization.
“There is no categorical dominance by trans athletes, but we do understand the categorical benefits for young people who play sports,” she told CNN.
Lawmakers have said these bills are intended to be proactive, and to remove what they claim is an unfair advantage that transgender girls may have over their teammates. But such examples are extremely rare. In March, The Associated Press called two dozen state legislators who sponsored these bans, and found that few could name any cases where the participation of transgender athletes in youth sports had become a source of contention within the teams.
A version of the ban made its way to South Dakota Gov. Kristi Noem’s desk in March, but Noem seemed to surprise both the LGBTQ community and conservative groups by vetoing the bill, calling it “overly broad.” She sent it back to the legislature with changes that, among other things, intended to spare the state from potential economic blowback, but the bill later died in the legislative chambers.
However, days after her veto and amid intense criticism from conservative groups, Noem signed two executive orders on March 29 that would ban transgender girls and women from competing in women’s sports at public high schools and colleges. But that move also prompted criticism from conservatives, who claim the executive orders are unenforceable.
Advocates hope that potential economic and political consequences could deter governors from enacting this year’s wave of legislation. In 2016, North Carolina passed its so-called “bathroom bill,” which meant that people at government-run facilities must use bathrooms and locker rooms that correspond to the sexes on their birth certificates. In practice, the law meant that many transgender and nonbinary people were unable to use restrooms in government buildings and felt unsafe to do so elsewhere in public. The bill’s passage led to public outcry followed by business boycotts, and was repealed the next year.

Twenty states have introduced bills that prohibit or impede the administration of gender-affirming therapy to minors. One bill recently introduced in Alabama would make it a felony for medical providers to provide transition-related care to transgender minors.
HB 1570, named the “The Arkansas Save Adolescents From Experimentation Act (SAFE),” was originally vetoed by Gov. Asa Hutchinson after passing both chambers of the legislature, but the veto was overridden days later. It’s the first bill in the US to become law that would prohibit health care professionals from administering gender-affirming care. The day the veto was overridden, the ACLU announced that the organization would sue to prevent the bill from being enacted. Currently, the bill is set to go into effect 90 days after the legislature adjourns, though it has not yet set a date for when it will do so.
Although these laws are framed as protecting children — the legislation in Alabama, for example, is called the Vulnerable Child Compassion and Protection Act — trans advocates and researchers believe they will do just the opposite. Pediatric groups have also protested these bills, saying that the treatment they provide to gender nonconforming or transgender youth can often be lifesaving.
Kerith Conron, research director at the UCLA Law Williams Institute, expressed concern about the implications for the mental health of trans adolescents in these states.
“Trans youth are dependent on parents, schools, institutions and pediatricians to support them, in living authentically and to access gender-affirming care — and now on policy makers to facilitate or deny access to care,” she told CNN. “It places trans youth in a precarious place.”
Based on the Williams Institute’s estimates of where trans adolescents live in the United States, Conron said approximately 1 in 4 could be affected by the current active bills if they were to become law.
“These laws are not grounded in science or majority medical opinion and have strong implications for the survival of trans youth in these states …  and for long-term quality of life for those who make it through adolescence,” she added.
There is a growing body of research that supports access to gender-affirming care in adolescence. A 2020 study by the American Academy of Pediatrics found that access to pubertal suppression treatment was associated with lower odds of long-term and consistent suicidal thoughts among transgender adults, a finding similar to studies done by the Williams Institute, Cornell University and other institutions.

Several states have introduced other anti-trans bills that target education, ID restrictions and more.
One Iowa bill requires that parents give written consent for teachers to discuss gender identity while their children are present in the classroom, and another stipulates that any curriculum that includes gender identity must include “the potential harm and adverse outcomes of social and medical gender interventions.” A bill in Arkansas says that educators must refer to students only by their “biological sex,” a disputed term that refers to the sex as listed on students’ original birth certificates. Medical experts say one’s biological sex should not be used to challenge people’s own assertions about their gender identities.
Aiden Cloud, an 18-year-old transgender student in Tennessee, says that restricting exposure to LGBTQ education may further harm the trans community.
“The students who need to be taught about LGBTQ issues the most are also the students whose parents are going to opt them out of this,” they told CNN. “The students who really need to be learning these things and unlearning certain biases wouldn’t be able to.”
Tennessee’s legislature is currently debating HB 529, which would allow parents to opt their children out of curriculums that discuss LGBTQ issues, and HB 800, which would prohibit educators from discussing LGBTQ issues in the classroom.
Arizona, Montana and South Dakota have introduced bills that restrict ID cards and other forms of documentation from reflecting a person’s gender identity. Iowa has introduced a bill that removes gender identity as a protected class under the Iowa civil rights act.

What’s next for these bills?

While many of these bills have already died in the committee stage, the trans community — and trans youth in particular — may still feel the mental toll of seeing the bills make progress in their states.
“It’s super demoralizing to see these things going through the state and getting passed,” said Cloud, who is also a member of GLSEN’s SHINE team of youth organizers in Tennessee.
“I’ve read some of [these bills] and it’s so depressing that people still think of me this way in 2021. It’s really demoralizing that people still believe these things and think it’s OK to just go after the LGBTQ community without knowing anything about us.”
These bills are also in opposition to the Biden administration’s position on transgender rights. On March 31, President Joe Biden issued the first-ever federal proclamation of its kind for this year’s International Transgender Day of Visibility. On the same day, the Pentagon issued new policies to allow transgender Americans to serve openly in the military, reversing the Trump administration’s ban. Biden campaigned on prioritizing issues facing LGBTQ youth and has issued several executive actions intended to advance LGBTQ rights.
Advocates say that a strong response at the federal level is needed to counteract these bills, which create a patchwork of legislation across states for the trans community to navigate.
The Equality Act, which was introduced to Congress in February, would amend the 1964 Civil Rights Act to explicitly include gender identity and sexual orientation as protected classes. The bill passed in the House, but its fate in the Senate remains unclear.
In the meantime, Cathryn Oakley, state legislative director and senior counsel for the Human Rights Campaign, said she hoped that lawmakers realize the potential damage that passing these bills could create.
“In a year where we’ve been isolated from each other, where children in particular have had a difficult time, isolating them further in this moment is an unconscionable choice,” she said in a news conference on March 24.
Share