Larry McMurtry at his bookstore, Booked Up No. 1, in Archer City, Texas, before auctioning off more than 300,000 books at “The Last Book Sale” in August 2012.

(CNN)Award-winning novelist and screenwriter Larry McMurtry has died of heart failure, according to his publicist, Amanda Lundberg. McMurtry, who won the Pulitzer Prize in 1986 for “Lonesome Dove,” died on Thursday.”Larry McMurtry passed away last night, on March 25 of heart failure at 84 years old surrounded by his loved ones who he lived with including long time writing partner Diana Ossana, his wife Norma Faye and their 3 dogs,” according to a statement from Lundberg. “His son James, his grandson Curtis, and his goddaughter Sara Ossana were also at his bedside.” McMurtry wrote many other novels, including “Terms of Endearment” and “The Last Picture Show,” three memoirs, a short biography of Crazy Horse and a collection of essays, according to the National Endowment for the Humanities, which awarded him a National Humanities Medal in 2014.His books were often set in Texas and focused on the mythical values of Texas and the American West, often trying to dispel those values. Lundberg said he would be buried “in his cherished home state of Texas.”The screenplay for the film “Brokeback Mountain,” starring Heath Ledger and Jake Gyllenhaal as two cowboys who secretly fall in love, was written by McMurtry and Ossana. Adapted from a short story by Annie Proulx, it won the Academy Award for best adapted screenplay in 2006. 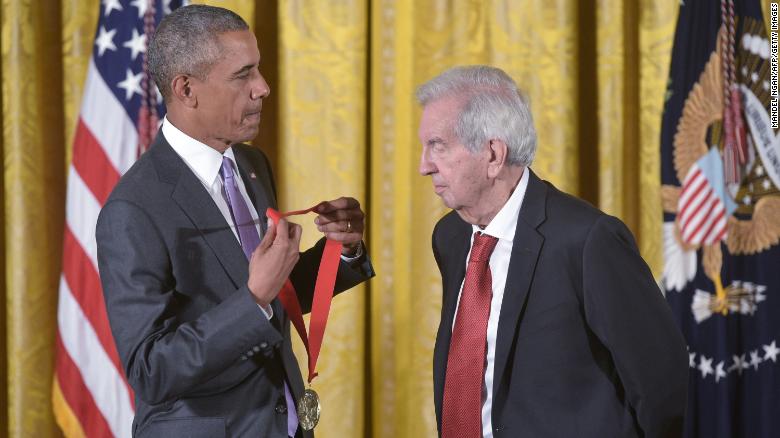 President Barack Obama presents the 2014 National Humanities Medal to writer Larry McMurtry during a ceremony in the East Room of the White House on September 10, 2015.McMurtry was born in 1936 in Archer City, Texas. After a stint at Rice University, he graduated from North Texas State Teachers College and then received a master’s degree from Rice. He also was a Stegner Fellow at Stanford University, where he studied with Irish short story writer Frank O’Connor. His first novel, “Horseman, Pass By,” was published in 1961, and was turned into the 1963 film “Hud,” starring Paul Newman. That was the first of many film or television adaptations of McMurtry’s works.”The Last Picture Show,” his 1967 coming-of-age story set in a small town similar to Archer City, was made into a 1971 film by Peter Bogdanovich.”Terms of Endearment,” McMurtry’s 1975 novel about the relationship between a mother and her daughter, was turned into a 1983 film by James Brooks and starred Shirley MacLaine, Debra Winger and Jack Nicholson. A major commercial success, the film was nominated for 11 Academy Awards and won five, including best actress for MacLaine and best supporting actor for Nicholson.In 1985, he published “Lonesome Dove,” a historical saga about two Texas Rangers and a cattle drive from Texas to Montana. After winning the Pulitzer Prize, the book was turned into an epic four-part TV miniseries starring Tommy Lee Jones and Robert Duvall. The series received multiple Emmy nominations and won seven.McMurtry was married twice. His marriage to Jo Scott ended in divorce, but the two had a son, James McMurtry, who has since become an accomplished singer-songwriter.In 2011, he married Norma Faye Kesey, the widow of author Ken Kesey, whom McMurtry met during his time at Stanford. He lived with his wife and Ossana.