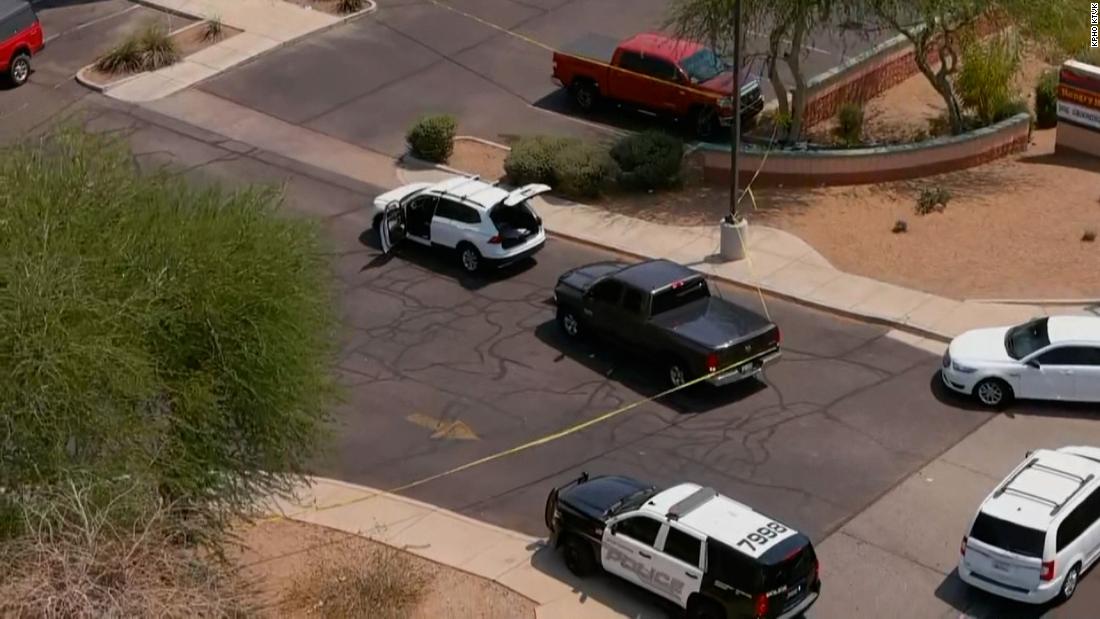 Nine other people were hurt by shrapnel and debris, Sgt. Brandon Sheffert with the Peoria Police Department said at a news conference.
“We have a total of eight incidents as of now,” he said.
Police pulled over the suspect in Surprise after his vehicle was spotted by a firefighter, Sheffert said.
The shooting scenes are in Glendale, Peoria, and Surprise — three cities just northwest of Phoenix in a region known as the West Valley. The shootings took place over the course of more than an hour, Sheffert said.
The sergeant said a firefighter spotted the suspect’s vehicle. The suspected shooter didn’t resist arrest, police said, and a weapon was allegedly found in his vehicle.
Aerial video from CNN affiliate KPHO/KTVK showed a white SUV with doors open that the news station described as the suspect’s vehicle.
Officials said they don’t think there was more than one shooter. “There’s no reason for the public to feel unsafe at this time,” Surprise police Sgt. Tommy Hale said.
The FBI is assisting in the investigation.
Banner Health officials said three of their hospitals have received nine patients. Two were at Banner Boswell, three patients were at Banner Thunderbird and four were at Banner Del Webb.
It is unknown whether the patients had gunshot wounds or other injuries.
Banner Health officials, citing privacy laws, said they could not provide any additional information on the patients.
Peoria is about 9 miles east of Surprise, which is about 45 minutes from downtown Phoenix. Glendale runs south and east of the two cities.

Voters in the state approved Measure 110 in No