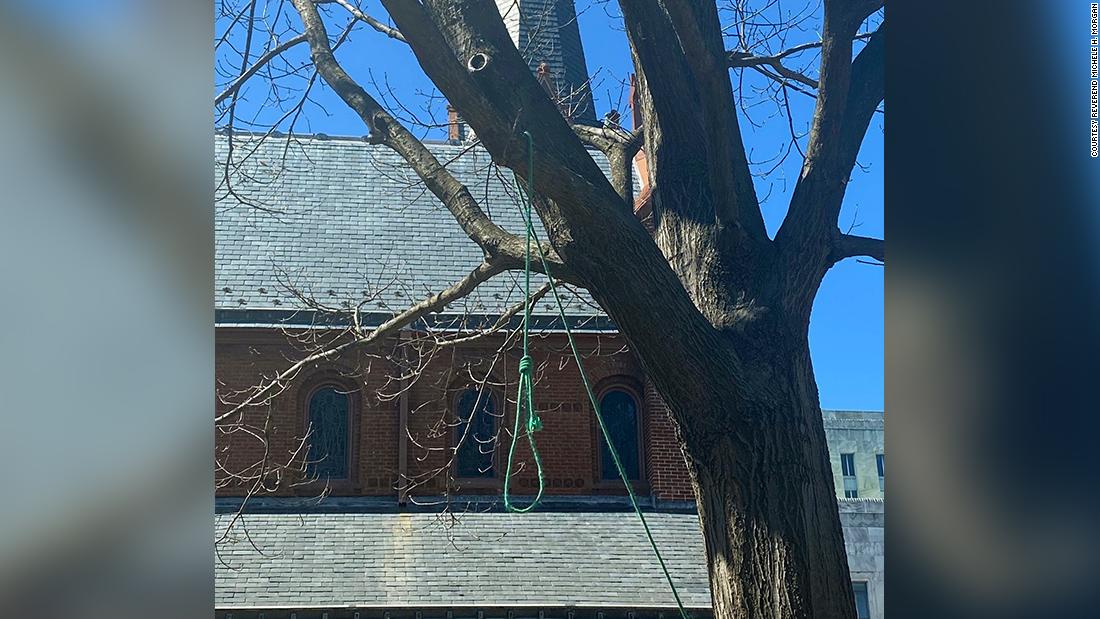 Rev. Michele Morgan, rector of St. Mark’s Episcopal Church, told CNN the rope was found by a technician preparing for musical performances the church is planning around the week of Easter.
“It is a desecration,” Morgan said. “This is a sacred space and that is a symbol of racialized hatred and it has no business in this country and the city and certainly not in a churchyard.”
The Metropolitan Police Department said it is investigating. “These types of offenses are taken seriously and are entirely unacceptable,” department spokesperson Hugh Carew told CNN. “We are currently investigating this as a possible hate crime.”
Morgan was not at the church at the time, due to Covid precautions, but drove to the church as soon as she heard about the incident.
In an email to congregants, Morgan said that after the police technicians took down the noose, “the Bishop, Jeff Kempskie, the police officer, I, and others prayed around the tree, reconsecrating the space and blessing the tree and the sacred space of our church.” Kempskie is the church’s director of music.
She added, in the email which CNN obtained, “I know that this symbol causes fear in people’s hearts.”
Morgan told CNN she hopes the church and the congregation can respond to the incident by leaning into their faith.
“I know for my faith life that everything is redeemable and God can redeem everything, even the person who decided it was a good idea to hang this thing in a tree in a courtyard,” Morgan said.
The church has a banner supporting the Black Lives Matter movement hanging outside.
Its other Black Lives Matters banners stolen were stolen twice earlier this year, including once in March, Morgan said. The church put the banner up following the death of George Floyd in Minnesota last summer.
Share

Around 40,000 youth cheerleaders, coaches and

Bald eagles once had faced grave threats to th