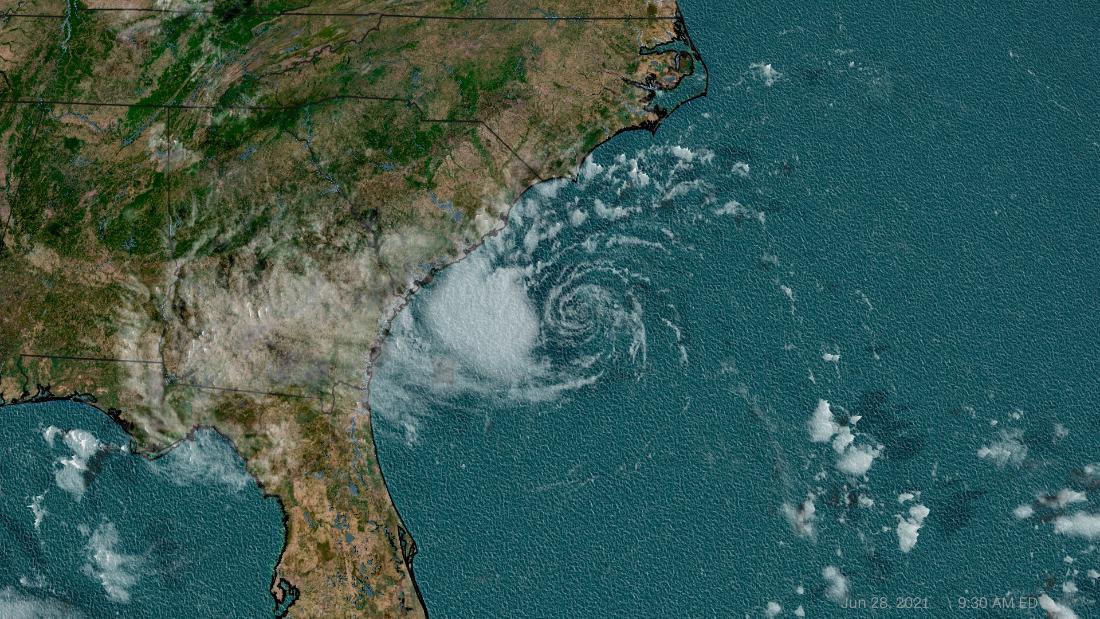 It came ashore on Pritchards Island, the National Hurricane Center said.
The fourth named storm of the 2021 season, Danny developed into a tropical depression late Monday morning and a tropical storm by mid-afternoon. The storm was located just off the coast of South Carolina, so it had little time to gain strength before making landfall.
Tropical storm warnings remain in effect for parts of the South Carolina coastline, from Edisto Beach to the South Santee River. That zone includes Charleston.
“A Tropical Storm Warning means that tropical storm conditions are expected somewhere within the warning area, in this case within the next 12 hours,” according to the NHC.
It was moving west-northwest at 16 miles per hour and will bring a few inches of rainfall to the Georgia and South Carolina coasts through Tuesday. It had sustained winds of 40 mph.
“Impacts associated with it should come in the form of localized heavy rainfall, gusty winds, enhanced rip currents, and a low threat of tornadoes,” the National Weather Service in Charleston said.
The Storm Prediction Center (SPC) has issued a marginal risk – level one of five — for severe weather on the South Carolina coast, citing Danny’s intensification for the heightened tornado threat.
Tropical systems frequently bring the threat of brief spin-up tornadoes as the storm moves onshore.
Some areas in southern South Carolina and southeastern Georgia could see up to three inches of rainfall. The flash-flood threat could be mitigated by the speed of the system, as it is expected to move quickly inland without lingering.
A marginal risk of excessive rainfall has been issued by the Weather Prediction Center (WPC) for the coastal regions of Georgia and South Carolina due to the rainfall potential from Danny.
“Guidance continued to show rain rates of 1-2 inches per hour, which could produce isolated flash flooding, especially in any coastal urban areas,” the WPC said on Monday.
Storm surge is predicted to be from 1 to 3 feet along the coast as the storm pushes inland.
Conditions are expected to improve overnight as Danny weakens as it moves father inland.

Hurricane season officially began on June 1, but storms in the early season have become more persistent.
The typical initiation point for these early season Atlantic Basin storms in June is within the Gulf of Mexico, where moisture is ripe, according to the NHC. As July rolls around, initiation in the Atlantic and off the northeast coast of South America becomes more prevalent.
As the season progresses into August, storm initiation begins to shift toward the mid-Atlantic and off the western coast of Africa, where tropical waves make their way northwestward, typically strengthening as they enter the Caribbean. Hurricanes become more likely, and much more frequent.
The peak of hurricane season typically lies in September for the United States, when landfalling hurricanes in the Gulf and up the East Coast ramp up significantly. Initiation happens within the Gulf of Mexico, as well as off the west coast of Africa.
Aside from Danny, a tropical disturbance in the central Atlantic has been producing thunderstorms and showers since last week.
Tropical storm initiation in the mid-Atlantic is fairly rare in late June, with one recorded initiation point occurring in the area from 1851-2015, according to the NHC.
Formation likelihood is low for the next 48 hours at 20%, with a 40% chance of formation over the next five days.
The system is expected to slowly develop over the week, moving northwestward at 20 miles per hour. It will likely make its way to the Lower Antilles by Wednesday night.