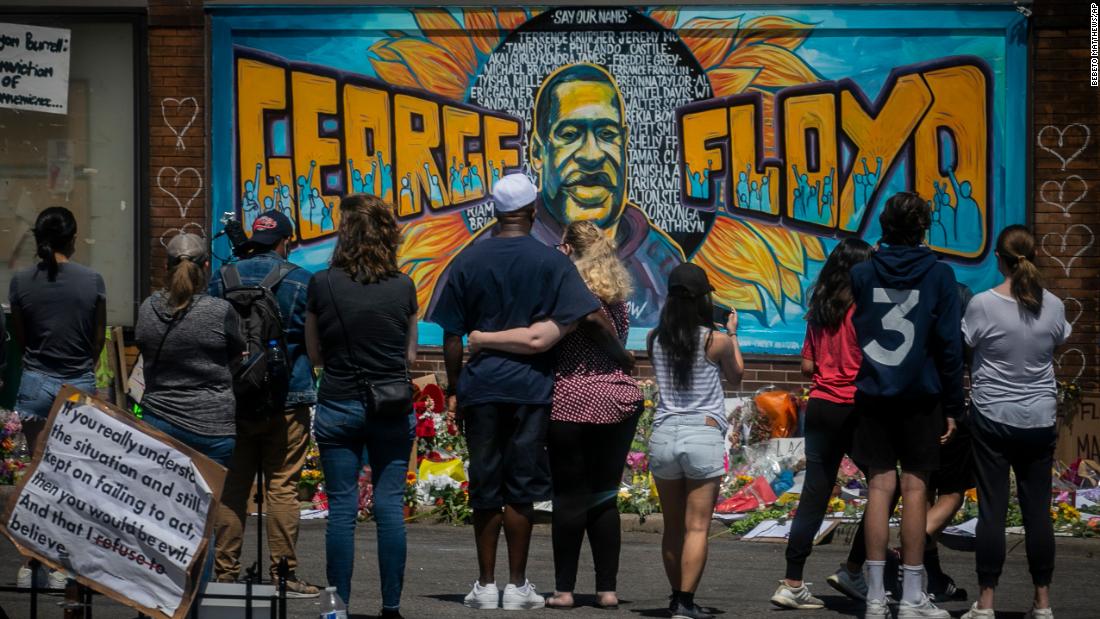 George Floyd’s brother, Philonise Floyd, said that he would return the settlement millions if it meant he could see his brother again.
“I thank the state of Minnesota for getting this settlement taken care of,” he said. “But even though my brother is not here, he’s here with me in my heart. Because if I could get him back, I would give all of this back.
“I know that he’s with us, and he’s standing up, right now, knowing that we have the opportunity to be able to fund low-income, African American communities.”
Floyd took a moment at a news conference where he was joined by family members, his legal team, and Mayor Jacob Frey to thank the protesters who supported the family, especially during the height of the pandemic this past summer. He also called for peace.
“So, one thing that the world needs to know. America, we need to heal, this nation needs healing. Our family needs healing,” the emotional Floyd said.
George Floyd’s sister Bridgett Floyd said in a statement, “While we will never get our beloved George back, we will continue to work tirelessly to make this world a better, and safer, place for all.”
She said the foundation she started in her brother’s name will honor his legacy as a community-minded volunteer.
The news comes as jury selection is underway for the trial of Derek Chauvin, a former Minneapolis police officer accused of killing the 46-year-old Black man in May 2020 by kneeling on his neck for almost eight minutes.
Floyd’s final moments, recorded on video, led to widespread protests against police brutality and racism under the banner Black Lives Matter as well as incidents of unrest and looting.
Chauvin has pleaded not guilty to second-degree unintentional murder and second-degree manslaughter charges. He has also pleaded not guilty to third-degree murder, which was reinstated in the case on Thursday.
In July, Floyd’s family had filed filed the federal civil rights lawsuit against the city of Minneapolis and the four former officers involved in his death.
The lawsuit said the city fostered a culture of excessive force and impunity within the police force and failed to terminate dangerous officers.
Frey told reporters the settlement reflects a commitment shared by Floyd’s family toward racial justice and social progress.
“We need to be unrelenting,” he said. “We need to be unapologetic in our pursuit of a more equitable local government and more just approach to community, safety, and our city, and we will be.”
Minneapolis City Council President Lisa Bender offered her “deepest condolences” to Floyd’s family, friends, and the community.
“No amount of money can ever address the intense pain or trauma caused by this death to George Floyd’s family or to the people of our city,” she said. “Minneapolis has been fundamentally changed by this time of racial reckoning, and this city council is united in working together with our community and the Floyd family to equitably reshape our city of Minneapolis.”

At the news conference announcing the settlement, Ben Crump, Floyd’s family attorney, lauded the city for changes to the police department.
“The settlement is not just historic because of the $27 million paid out but for the impact on social justice policy reforms and police reforms,” he said. “Because the financial compensation most directly impacts George Floyd, and his family, the future of his family. But it is the policy reforms that affect all of us.”
Days after Floyd’s death, the Minneapolis City Council voted to ban chokeholds, require officers to report other officers they see using chokeholds, and to intervene in such cases. At the time, the mayor vowed to help change the way the city’s police department operates, saying “now we can finally get this right.”
And in July, the mayor and police Chief Medaria Arradondo announced changes to the department’s use of force reporting requirements that place a stronger emphasis on de-escalation.
The agency is scheduled to see funding cuts after a December in which the city council voted to redirect $7.77 million from the police budget to other programs, according to a news release.
The plan funds mental health programs, directs funding toward “increasing capacity within the Civil Rights Department’s Office of Police Conduct Review to investigate complaints about police officer behavior,” and redirects some nonemergency calls to other departments.

Another police shooting resulted in a large settlement

In 2019, the city announced a $20 million settlement following the death of Justine Ruszczyk two years earlier.
Ruszczyk, 40, had called 911 to report a possible assault in the alley behind her home. She was shot by former Minneapolis police officer Mohamed Noor, who was responding to her call with his partner.
Ruszczyk’s 2017 death drew widespread attention, in the United States and in her native Australia. She had moved to Minneapolis to be with her fiancé and was killed a month before her wedding.
Noor was convicted of third-degree murder and manslaughter and was sentenced to 12.5 years in prison. He is appealing his sentence.

The names of the four people who won $1.

“Because of Trump’s apparent role