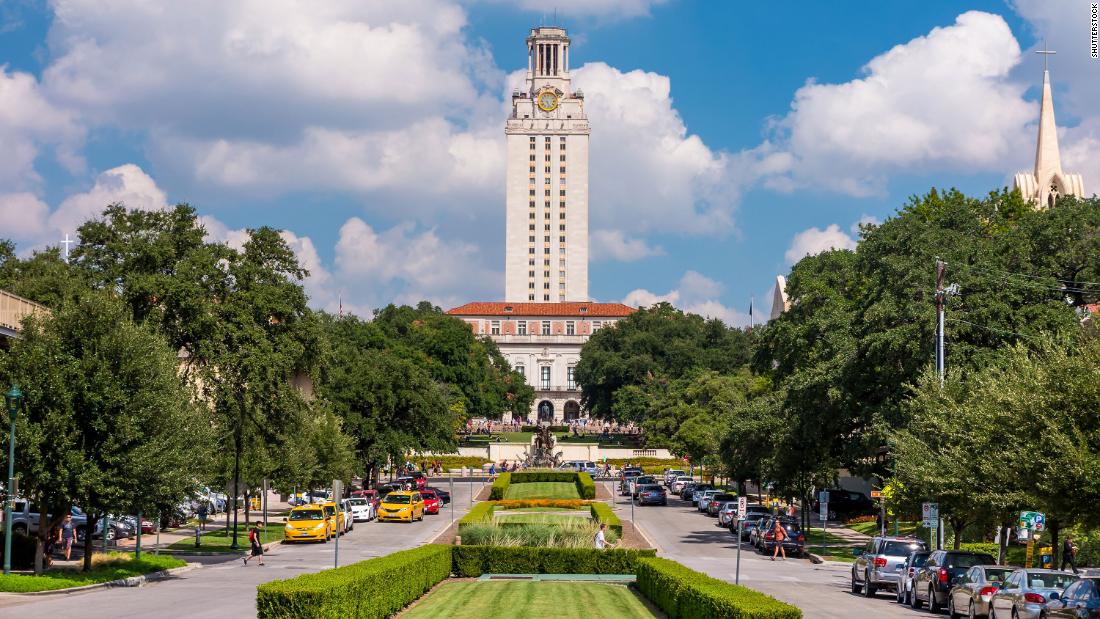 UT President Jay Hartzell established The Eyes of Texas History Committee in October, saying it would research, analyze and collect data to suggest “ways for the university to move forward with greater inclusion and equity.” The committee was composed of 25 former students, current students, administrators, faculty members, student athletes, retired administrators, spirit squad members and communication specialists.
For four months, the committee went through decades of research and submitted a 59-page report Tuesday. It found the song’s history to be complex.

The committee did in fact confirm that the first public singing of the song was performed in 1903 at a minstrel show, a form of entertainment at the time that is now condemned for displays of blackface and demeaning stereotypes of Black people, but it was not written in minstrel dialect or for the show, the report says.
In fact, the report says the song was written to “affectionately parody” the signature line of school President William Prather, and it debuted at the show because it was a fundraiser for the track team and the president was going to be there.
“Jim Cannon, a member of the Varsity Quartette who first sang ‘The Eyes’ at the Varsity minstrel show, would describe the performance as a ‘joke,’ poking fun at the president for how much he used the phrase,” the report says.
Two years later, the song was turned into a solemn hymn and sung at the Prather’s funeral. It then quickly became a hit with the students and was sung at sporting events and at the spring commencement as early as 1916, according to the report.

Accounts over the years have said the signature line, “the eyes of Texas are upon you,” was inspired by a famous saying of Robert E. Lee — “the eyes of the South are upon you” — when Lee was the head of Washington College, now Washington & Lee University. However, the committee found no primary evidence that Lee said that phrase at the college.
It did find evidence that Lee said “the eyes of the country are upon you” in an order to his troops in 1861 — but the committee noted numerous uses by others of similar phrases long before Lee. They included George Washington, who used it dozens of times; John Adams; William Henry Harrison; and a passage in the Book of Job.
“Based on the evidence, the committee concluded that there was a very low likelihood that the line originated with Robert E. Lee and was instead a message of encouragement and accountability to the students and faculty at the then-fledgling university,” the report says.

The section that was said to allude to slavery was found to have no connection at all. The song’s writer specifically stated it was a “direct statement to the student body (overwhelmingly white at that time) that the elders of the state and the previous generation are watching them and expecting them to do great things with their education,” according to the report, and that the “eyes” are still on them at night when they are out having fun.
The alma mater’s tune is borrowed from “I’ve Been Working on the Railroad,” also called “The Levee Song,” which is known to parody Black railroad and levee camp workers. But committee member Cloteal Davis Haynes said she could not find any part of the alma mater song that to her seemed racist.
“The biggest eye-opener about the history of ‘The Eyes of Texas’ was that that song and those lyrics were not written in the so-called ‘negro dialect,’ unlike the tune and the song ‘I’ve Been Working on the Railroad,'” said Davis Haynes, president of The Precursors, a group of African American UT alumni.

Four key takeaways from the committee

There were four key takeaways from the committee.
First, they established, along with the president, that “The Eyes of Texas” remains UT’s alma mater.
Second, the song reflects not only the history of the university but the history of the United States, and that “complexity creates an opportunity for continued learning, sharing and understanding.”
Third, the facts and historical context matters. Even though the song debuted in a racist setting, the research showed the song had “no racist intent.” The committee acknowledged the systemic racial intent existed in the setting and culture where the song debuted, however, and said, “The exclusion of Black students at that time presents an opportunity to think about how they and other communities of color have fought for inclusion and the work that remains to ensure all members of our community feel they belong.”
Last, the song has always been about accountability, “therefore, the spirit and intention of the song compels the university to be transparent about its past and be ever more accountable to the state and its diverse people.”

UT athletic director addresses past concerns in light of the report

Over the summer, student-athletes released a joint statement, shared on Twitter, saying they will not participate in recruitment or donor-related events if the university didn’t comply with certain demands.
In addition to renaming several school buildings and outreach programs, the athletes asked that the school replace “The Eyes of Texas” with “a new song without racist undertones.”
Though the song will stay, Athletics Director Chris Del Conte said in a statement there are several measures coming, including renaming the field at Darrell K Royal-Texas Memorial Stadium in honor of two of UT’s Heisman Trophy winners, Earl Campbell and Ricky Williams, and the commissioning and placement of a statue of Texas’ first Black letter winner, Julius Whittier.
“Now that we have the report in hand, the conversations we’ve been having with our student-athletes, coaches and staff can take a very important next step and will be on-going,” Del Conte said.
“We know there’s a lot to take in, but now they have a chance to take some time and digest this information, think about it, ask questions and begin what we expect will be tough, fair and open discussions.”

Not all agree with the report

Former Longhorn women’s basketball player Imani McGee-Stafford told ESPN she thinks saying the song has “no racist intent” is unfair.
“I think that in an effort to be transparent they formed the committee, but if we’re going to be transparent we have to be transparent. You can’t say something has no racist intent but say it aligned with the times we know are racist. You can’t separate the two,” McGee-Stafford said.
“So if we’re going to be transparent, then say, ‘In reality this is really tough to separate from our culture and our heritage and people are really tied to that, so we’re trying to figure out how we can both honor people who are tied to the song but acknowledge that yes, it is a racist song,’ and figure out how to change it, but they’re not doing that.”
Share

At least 18 people died of complications from C

It’s a crisp October afternoon, the kind of aut