Texas Gov. Greg Abbott has blamed migrants for spreading Covid-19, without evidence, while blocking federal plans to support border communities. The Department of Homeland Security had set plans in motion to use Federal Emergency Management Agency money to support community efforts to test, isolate and quarantine migrants, but the governor said the onus was on the federal government.
In a letter to the Republican governor Monday, lawmakers asked him to reconsider, stressing the financial burden on border communities without federal help. 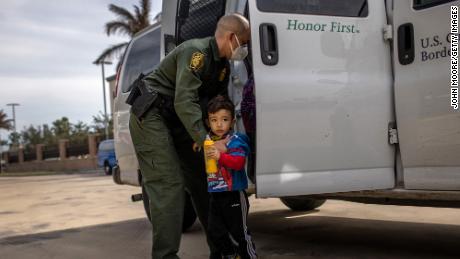 “Your recent comments about asylum-seekers carrying COVID-19 into Texas ring hollow when you are the one standing in the way of sorely needed federal resources and ultimately is the same dangerous rhetoric fueling white supremacist attacks on immigrant and minority communities,” the letter reads.
“Instead of spreading xenophobic claims, we urge you to accept these vital FEMA funds localities are relying on and work with the Biden Administration as they continue to look for ways to assist both asylum-seekers and Texans,” it continues.
A Homeland Security spokesperson told CNN last week the department has been working with local mayors and public health officials in Texas to provide Covid-19 testing and its agreement with partners called for federal funds to cover expenses related to testing, isolation and quarantine.
“We hope that Gov. Abbott will reconsider his decision to reject DHS’s agreement with the Texan local authorities that would enable the very testing of migrant families that Governor Abbott says he wants,” the spokesperson said.
The Biden administration is still largely relying on a Trump-era policy at the US-Mexico border to turn away the vast majority of migrants encountered by the Border Patrol. But Mexico stopped accepting some families from being returned. That change, combined with social distancing in US detention centers, has created a lack of space for migrants, forcing Customs and Border Protection officials to release families into the US.
The agency said in a statement that personnel check for Covid-19 symptoms and “consult with onsite medical personnel, the U.S. Centers for Disease Control and Prevention (CDC), or local health systems as appropriate.”
Share