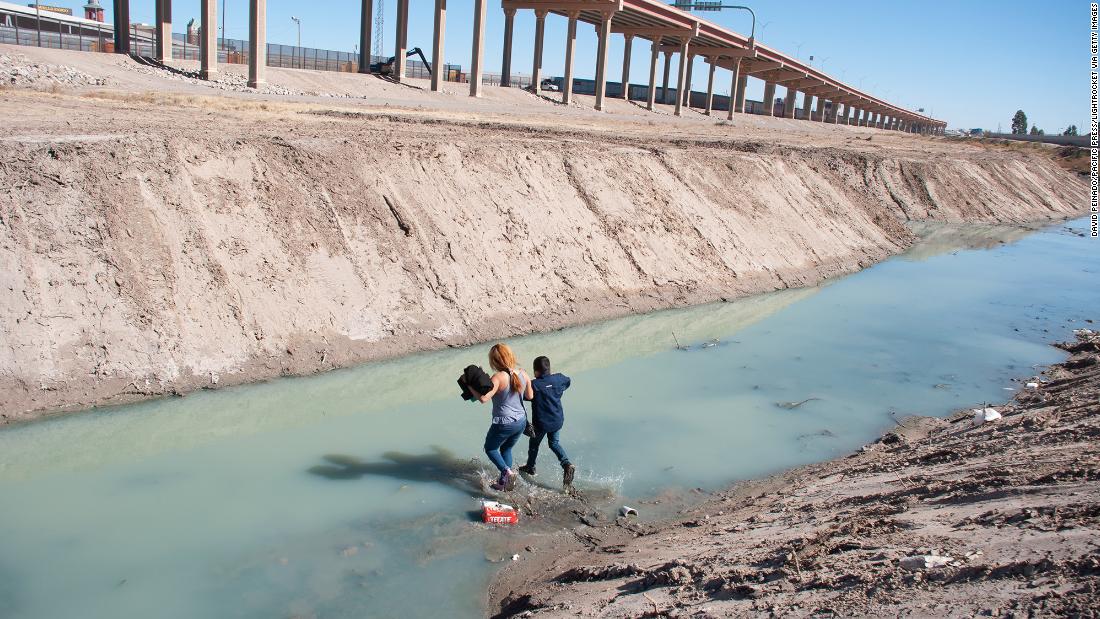 Now it’s a shelter run by Catholic Charities. Where there used to be rows of liquor, there’s now toiletries and diapers. Small children play on the floor. Colorful drawings hang from the blacked-out windows.
This center has become a haven of activity in recent weeks, as more and more families have crossed the Rio Grande River from Mexico seeking asylum in the United States. U.S Customs and Border Protection officials process the migrants and give them a court date, then they drop them off at a bus station in downtown McAllen, just across the street from the respite center.
While the numbers are nowhere near the level of families crossing a couple of years ago, the numbers have been steadily increasing since April. The migrants are driven by the Covid-19 pandemic, the devastation left by two major hurricanes in Central America, and a new US President.
Edwin Rubio and his family were dropped off at the McAllen bus station on a Wednesday morning in early February. Rubio told CNN they decided to make the trek from Honduras to seek asylum after President Joe Biden was elected.
“There will be new laws, new immigration laws that will favor Latinos,” he said.
CBP officials had about 78,000 encounters with migrants at the southern border in January, up from about 72,000 in October, according to CBP reports. The vast majority of those encounters are single adults and are turned away. But the number of family units significantly increased from 4,494 in December to 7,260 in January.
Throughout the pandemic, the US has enforced a public health policy of expelling apprehended migrants quickly. Just recently, Mexico stopped accepting some families from being returned. A new law in Mexico, combined with social distancing in US detention centers, has created a lack of space for migrants, forcing CBP officials to release families into the US interior.
“Per longstanding practice, when long-term holding solutions aren’t possible, some migrants will be processed for removal, provided a Notice to Appear, and released into the U.S. to await a future immigration hearing,” CBP said in a statement. “As the Administration reviews the current immigration process, balancing it against the ongoing pandemic, we will continue to use all current authorities to avoid keeping individuals in a congregate setting for any length of time.”

Sister Norma Pimentel, who runs Catholic Charities in the Rio Grande Valley, said they were seeing just a few migrants each day throughout the pandemic, but now they’re seeing 50 to 100 people a day.
She said the recent uptick in families and the policy of releasing them in the US has created confusion and frustration among migrants who’ve been waiting on the other side of the border for their court dates as part of the Trump administration-era policy named Migrant Protection Protocols (MPP).
Thousands of migrants have been waiting for months, if not over a year, for their court date in poor conditions in Mexico. Seeing families cross illegally and being released has sent shock waves among those waiting, said Pimentel.
“It’s very confusing and they don’t understand that. ‘Why them first and not us. You know we’ve been here waiting for this day and then it’s not happening to us,’ Pimentel said. “And I say, ‘Well, because things happen,’ and these families seem to be crossing and there’s some changes that make them enter and that’s why. But it’s not because you’re being neglected or are not considered. It’s just a matter of you waiting for the right time.”
The Biden administration announced it will soon begin processing those MPP applicants waiting in Mexico. The initial phase will apply to estimated 25,000 migrants.
In the meantime, communities along the border in Texas have expressed concern about migrants being released during the pandemic. McAllen requested thousands of Covid-19 tests from state officials last month after learning migrants were not being tested by CBP.
“To drop them off at our bus station without testing them first? I think that’s irresponsible to not only the border but the whole United States,” said McAllen Mayor Jim Darling.
The city received 6,000 tests, which are being administered by Catholic Charities. If migrants tests positive, the organization will help them quarantine in a local hotel. As of early February, no one had presented with a positive test, according to Catholic Charities.
In San Diego, there’s also been an uptick in asylum seekers in the past few weeks, according to Kate Clark, senior director of immigration services at Jewish Family Service. The organization works with the county to help asylum seekers quarantine in hotels for 14 days and then assists the migrants in getting to their final destination.
She said they’ve especially seen an increase in families from Haiti. That includes two parents who asked to be called Faya and Dhoul. Faya said they didn’t care who was president, but they are desperate to escape what they described as criminals threatening to kill them in Haiti.
“I left my country for one reason. They tried twice to kill me,” Faya said in quarantine from a hotel room in San Diego. “We decided to leave my country to save my life and my family’s.”

Priscilla Alvarez contributed to this report.

Salzman, 45, has spent the past several years