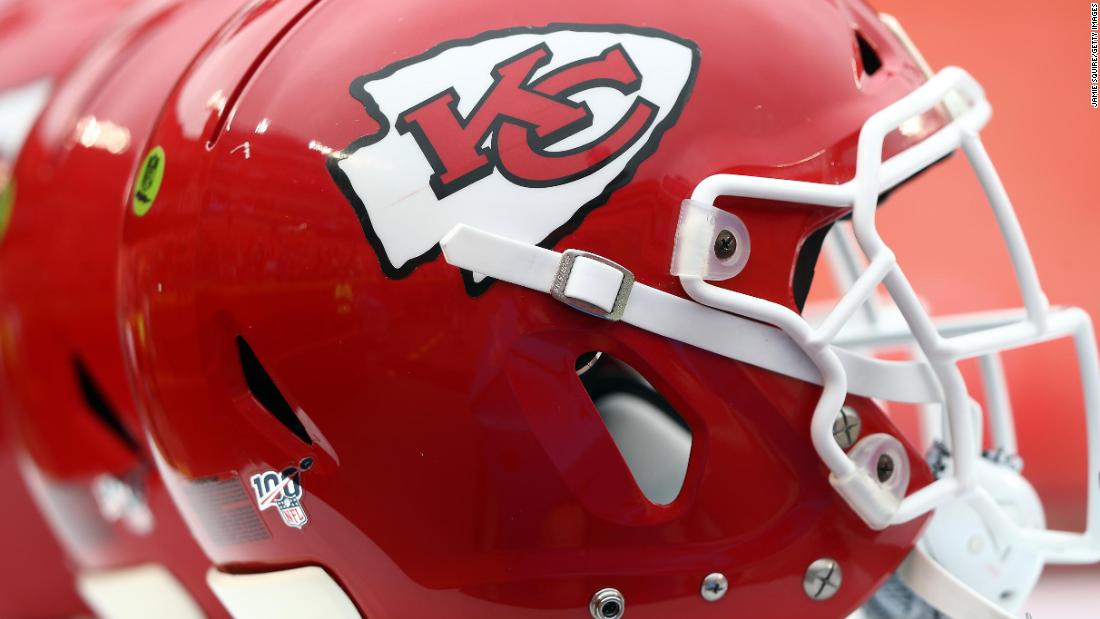 The racial justice movement that was reignited last summer prompted a number of professional sports teams to re-examine their names, mascots and other fan traditions. Washington’s football team got rid of the slur in its name. Cleveland’s MLB franchise announced it would drop “Indians” from its name once it settled on new branding.
The Chiefs had their own reckoning. 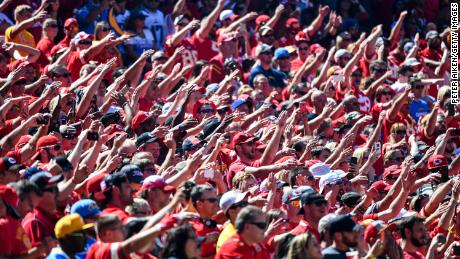 In August 2020, the NFL team announced it would ban fans from wearing ceremonial headdresses and Native American-style face paint in the team’s stadium. But they stopped short of changing their name or prohibiting fans’ use of the tomahawk chop, saying that leadership was reviewing the pregame tradition.
The Chiefs said the moves were born out of six years of dialogue with a group of tribal leaders. But for many Native activists, the changes — while significant — didn’t go far enough. Super Bowl LV will be another reminder of the harm and offense they’ve long felt.
“Racism is going to have a global stage on Sunday,” said Crystal Echo-Hawk, founder and executive director of IllumiNative, an advocacy group that works to increase the visibility of Native people.
As the Chiefs take the field in Tampa, Florida, while the world looks on, here’s where the conversation stands — and why activists say change is long overdue.

How the Chiefs got their name

The Chiefs are named for former Kansas City mayor Harold Roe Bartle, a White man who impersonated Native American culture.
Before becoming mayor, Bartle was actively involved in leadership of the Boy Scouts of America. In 1925, he created the Tribe of Mic-O-Say, a scouting organization that drew on Native American heritage and customs.
Bartle was not a Native American, but claimed he was “inducted into a local tribute of the Arapaho people,” according to Mohawk journalist Vincent Schilling. Bartle was called “Lone Bear,” and later came to be colloquially known as “Chief.” 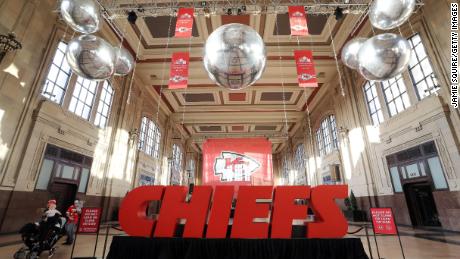 Nearly 40 years later, Bartle served two terms as mayor of Kansas City and helped bring the Dallas Texans football team there. The team was eventually renamed the Chiefs in Bartle’s honor.
The name may seem innocuous. But for Echo-Hawk, the problem is not just the name but the culture of Native appropriation and mockery that flows from it.
“It’s this ecosystem that it creates of bigotry and hate,” she said. “It’s the culture in which fans engage in.”
There’s the Chief’s home of Arrowhead Stadium. The pregame beating of the drum. The horse mascot named Warpaint. And of course, the tomahawk chop and the accompanying faux war chant.

The team has made some changes

Activists say the references dehumanize Native people. And they want them gone.
“When names like the Chiefs are used, it makes that culture a stereotype,” said Kate Finn, executive director of First Peoples Worldwide. “It confines it to a caricature that really doesn’t express the fullness of Indigenous peoples’ culture.”
Not In Our Honor, a coalition that advocates against the use of Native American imagery in sports, has long been calling on the Chiefs to change their name and cease use of any Native symbols. In collaboration with other local and national groups, they recently rented two billboards in Kansas City to amplify that message.
“Change the name and stop the chop,” the billboards read. 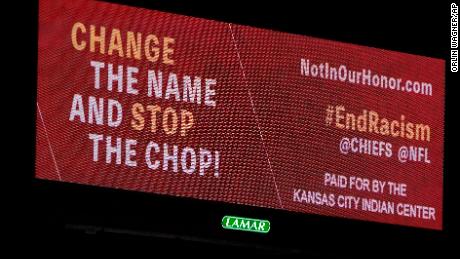 The Chiefs did not respond to multiple interview requests for this story.
The team has said they are engaged in dialogue with a group of tribal leaders around issues of cultural sensitivity. Since 2014, the Chiefs have invited tribe members to participate in an annual American Indian Heritage Month game, which includes rituals such as a “Blessing of the Drum” and a “Blessing of the Four Directions.”
At the height of racial justice protests last year, the team took some steps to address concerns. They banned headdresses and Native American face paint and had cheerleaders perform the chop with a closed fist instead of an open palm. They also said they were considering changes to the beating of the drum and reviewing the tomahawk chop.
Camilla Chouteau, tribal council secretary for the Prairie Band Potawatomi Nation, joined the Chiefs’ American Indian community working group in November.
Personally, she says it would be helpful if the Chiefs changed the song that accompanies the chop, though she hasn’t discussed that with the team’s leadership. But she doesn’t find the other rituals offensive, and says she’s encouraged by the Chiefs’ openness to their suggestions.
“Change is hard, and getting fans to change behavior takes time,” Chouteau said.

For many others, the Chiefs’ efforts so far have fallen flat.
Gaylene Crouser, executive director of the Kansas City Indian Center and a member of the Not In Our Honor coalition, said the Chiefs’ continued use of their name and Native imagery is made all the more insulting given the NFL’s recent rhetoric around fighting systemic racism.
The NFL committed $250 million over the next 10 years to fight systemic racism. To further demonstrate that commitment, the league also stenciled two slogans on each team’s end zones all season: “End Racism” and “It Takes All Of Us.” 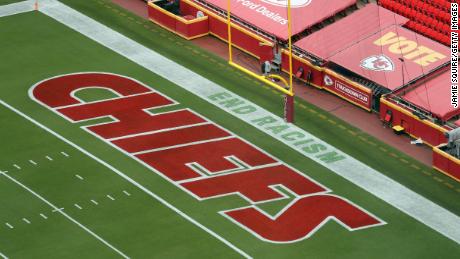 For Crouser, as long as the appropriation of Native culture and traditions is allowed to stand, the gestures remain hollow.
“They dial back the blatant racism because they know it’s harmful,” she said, of the changes the team has made over the years. “But they don’t want to actually change.”
Finn agreed.
“Racism is the use of these names, logos, mascots and condoning this fan behavior,” she said. “If you’re going to make a statement decrying racism, then you need to make a statement to decrying these other things as well.”

Others are pressuring the Chiefs, too

The damaging effects of Native appropriation in sports have been well documented.
In 2005, the American Psychological Association published a resolution calling for the retirement of mascots, symbols and images featuring Natives, citing a body of research that shows such caricatures have negative mental health consequences for Native people.
The National Congress of American Indians called for the end of racism in sports and Native sports mascots in a report published in 2013, saying that such imagery perpetuates the idea that Native people are “frozen in history.”
“If we’re a cartoon, how are we going to take seriously tribal sovereignty and water rights and missing and murdered Indigenous women and all these things that need to be addressed and we’re still working on?” asked Crouser. 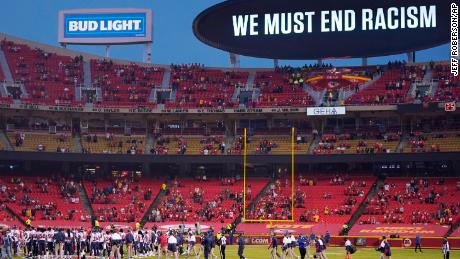 With that in mind, advocacy groups are ramping up the pressure on the Chiefs.
Thousands of people have signed the online petition. In addition to the billboards in Kansas City, the Not In Our Honor coalition has hired a plane to fly near the stadium throughout the weekend displaying the “Change the Name, Stop the Chop” message. And the Florida Indigenous Rights and Environmental Equality Organization is leading a protest Sunday outside the stadium where the Chiefs and the Tampa Bay Buccaneers will play.
“Native peoples have been organizing to eliminate racist sports mascots for decades,” said Echo-Hawk. “We’re not going to tire.”
The Chiefs’ hometown newspaper has echoed those calls, too.
“There is no glory in being the last holdout clinging to traditions and symbols that are now viewed as insensitive or even racist,” the Kansas City Star editorial board wrote in December of last year. ” And as other teams have taken action, it has become increasingly apparent that the Chiefs are delaying the inevitable.”
The decisions made by Washington’s NFL team and Cleveland’s MLB team to change their names have shown that teams can bring fans together in ways that don’t cause harm or offense to Native people, activists say.
So instead of holding on to symbols and traditions that are widely considered disrespectful, the Chiefs should consider this a chance to attract more Native fans and make their franchise inclusive, Finn said.
“This is a moment where the NFL can apply their zero tolerance for on-field use of racial slurs to all races and ethnic groups, especially Native people,” she said. “There’s a real opportunity there for them to step up and to really be forward in their commitment to end racism.”