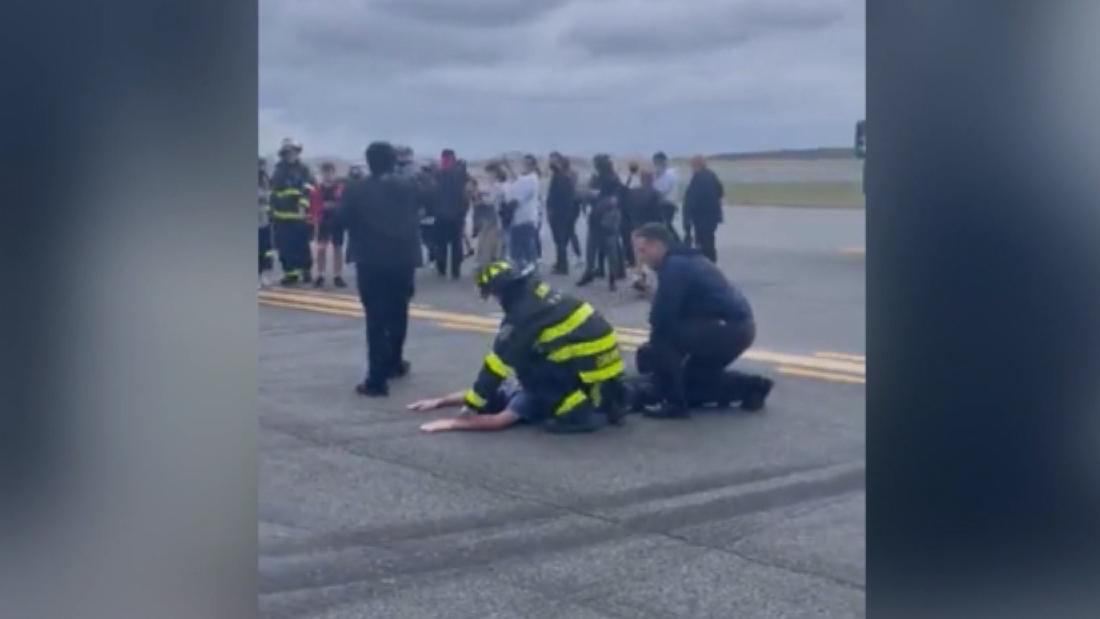 The determination was made by the Joint Terrorism Task Force, the FBI and the Port Authority Police Department, per spokesperson Thomas Topousis.
The flight, a Republic Airways service operating as American Airlines flight 4817, was evacuated upon arrival “in response to reports by passengers of suspicious and erratic behavior by a fellow passenger,” according to a statement Saturday from the Port Authority.
Law enforcement and first responders met the aircraft, Republic Airways said Saturday, and “the passenger involved in the incident” was taken into custody.
Initial reports of the passenger acting in a suspicious manner were made by other passengers on board, Topousis said Sunday, and was not an assessment made by authorities that prompted the airline crew’s actions.
The aircraft declared an emergency on Saturday “in response to passenger behavior near the end of the flight,” according to a statement from the air carrier.
Passengers told Port Authority Police at one point during the flight the passenger reached for his luggage and they were scared, Topousis told CNN. There were 76 passengers and six crew aboard the flight, he added.
New York Gov. Kathy Hochul wrote in a tweet Saturday that officials were “monitoring the situation, and there is no reason to believe there is any danger to New Yorkers at this time.”
Operations at the airport were running normally after the incident, according to a Saturday evening tweet from the airport’s official Twitter handle.
“The earlier incident involving a disruptive American Airlines/Republic Airways passenger and an evacuation of passengers has been resolved,” the tweet said.

One passenger described what happened

Earlier Saturday, the pilot alerted authorities on the ground of the incident and when the plane landed on a runway, a “runway exit from the airplane was performed to clear passengers from the airliner,” according to the earlier Port Authority statement.
Investigators interviewed the passenger who was allegedly acting suspiciously as well as several passengers who were sitting closest to that person, in order to learn more about what took place aboard the flight, the Port Authority added.
The Port Authority Police Department called in the New York City Fire Department to assist with a flight making an emergency landing, the FDNY told CNN.
Indianapolis resident Laura Bergdoll, who was on the flight with her 7-year-old son, told CNN as soon as the plane landed “the pilots and flight attendants started yelling ‘Evacuate! Evacuate!’ and we all got off the plane.”
The Transportation Security Administration said Saturday’s incident “was an example of a ‘See Something, Say Something’ situation” according to a statement from TSA spokesperson Sari Koshetz.
Passengers reported seeing suspicious behavior on the aircraft to the flight crew and the flight crew then alerted the captain, who then in turn “took the precaution of parking away from the terminal,” Koshetz said.
The New York Port Authority Police responded to the incident, along with an Explosive Ordnance Disposal and a K-9 team, and cleared the situation, Koshetz added.
Share