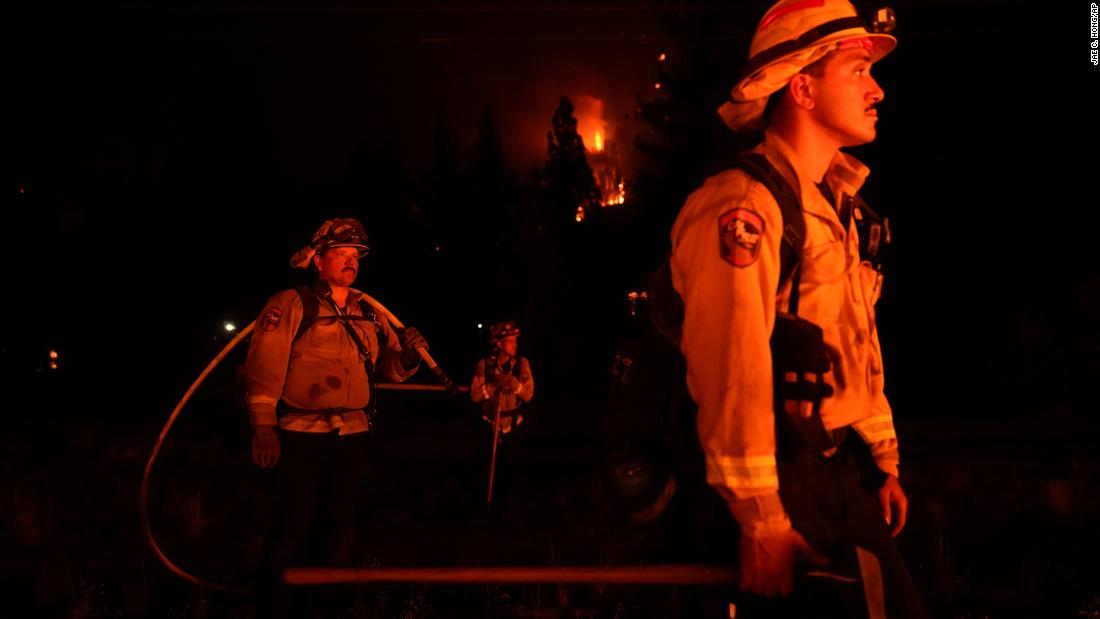 “Firefighters are getting tired, they’re getting drained,” Cal Fire spokesman Dave Lauchner told CNN.
The severe drought suffocating parts of the American West is not only leading to water and food production shortages, but it is also creating the ideal environment for more wildfires to spark rapidly, scientists and climate experts say.
“Above normal significant fire potential is forecast to continue through September for much of the Northwest, Northern Rockies, and northern portions of the Great Basin and Rocky Mountain Geographic Areas,” the National Interagency Fire Center wrote in an outlook report last month.
And in some places, those conditions can extend even longer.
“Most mountains and foothills in California are forecast to have above normal potential through September with areas prone to offshore winds likely to retain above normal potential into October and November in southern California,” the fire center said.
California’s fire season this year has been unrelenting, torching more than three times the land burned in the state during the same time span last year, officials said.
As of Thursday, more than 15,000 firefighters were on the frontlines of California’s 16 active large wildfires, Cal Fire said. And nearly 2 million acres have been scorched across the state.
“We’ve been battling fires for months now. We’ve had the Dixie fire, which is over 800,000 acres, and then this fire, this fire has been going on for almost three weeks now,” Cal Fire’s Lauchner said, referring to the Caldor Fire.
The struggle against wildfires has been waged across the West. At times, the global Covid-19 pandemic has made it even more challenging.
In July, seven firefighters battling the Bootleg fire in Oregon had to quarantine after testing positive for the coronavirus.
And this week, between 16 and 20 firefighters working on the Caldor Fire were sidelined due to possible exposure, Cal Fire’s Kevin Brown told CNN’s Stephanie Elam.
There is no question that climate change has made deadlier and more destructive wildfires the new normal. With about 90% of the West region currently in some form of drought, more than half are experiencing extreme or exceptional — the most severe categories, according to the US Drought Monitor.
The culprit?
Multiple studies have linked rising carbon dioxide emissions and high temperatures to increased acreage of burning across the West, particularly in California.
And as fire conditions intensify, the ongoing drought in California continues to strain the state’s water resources. The levels of California’s two largest reservoirs — Lake Shasta and Lake Oroville — are currently at 43% and 34% of their historical averages, respectively, the drought monitor said.

The Caldor Fire that marched into the Lake Tahoe Basin this week has swelled to 212,907 acres and was 29% contained Friday. The blaze has significantly slowed its growth amid favorable weather conditions, leading fire officials to be “cautiously optimistic” about the impact on the area.
Growth of the Caldor Fire was limited to 2,350 acres overnight, the fourth straight day of decline, said US Forest Service Sierra Forest Supervisor Dean Gould in a briefing Friday.
“Things are clearly headed in the right direction for us,” said Gould.
At Friday’s briefing, firefighters were acclaimed for their efforts to defend Tahoe’s famed ski resorts including Kirkwood and Heavenly.
The fire, which is one of the few wildfires to cross from one side of the vast Sierra Nevada Mountain range to the other, has forced some 20,000 residents in the resort city of South Lake Tahoe to flee. It’s been burning for nearly three weeks as it marches toward Nevada’s border.
“Extremely dry air will remain over the area for the next couple of days and also heat will be building in the area throughout the weekend into Labor Day,” CNN weather producer Robert Shackelford said. “Winds will not be as significant as past events, with some gusts being as high as 15 mph. But even a gust like this can help fires to spread.”
South Lake Tahoe, normally bustling with vacationers, was a gray ghost town this week, with empty parking lots, closed roads and shuttered businesses as the fire’s thick smoke hovered over the area.
Evacuated residents should expect to stay out of their homes for the next couple of days,” said Cal Fire’s Brown. Even where there is no immediate threat, it takes time to inspect roadways, clear tree hazards and get utilities back up and running, Brown said Thursday.
Overall, about 53,000 people have been placed under evacuation orders in the state, according to the California Governor’s Office of Emergency Services. Some evacuation orders have been downgraded to warnings.
The White House on Wednesday approved California Gov. Gavin Newsom’s request for a presidential emergency declaration to receive direct federal aid for the Caldor Fire.
“The Department of Defense has trained and is deploying additional firefighters to support our ongoing firefighting efforts in California,” President Joe Biden said Thursday.

“I feel exceedingly joyful, happy, that

Getting enough sleep at night may help curb peo