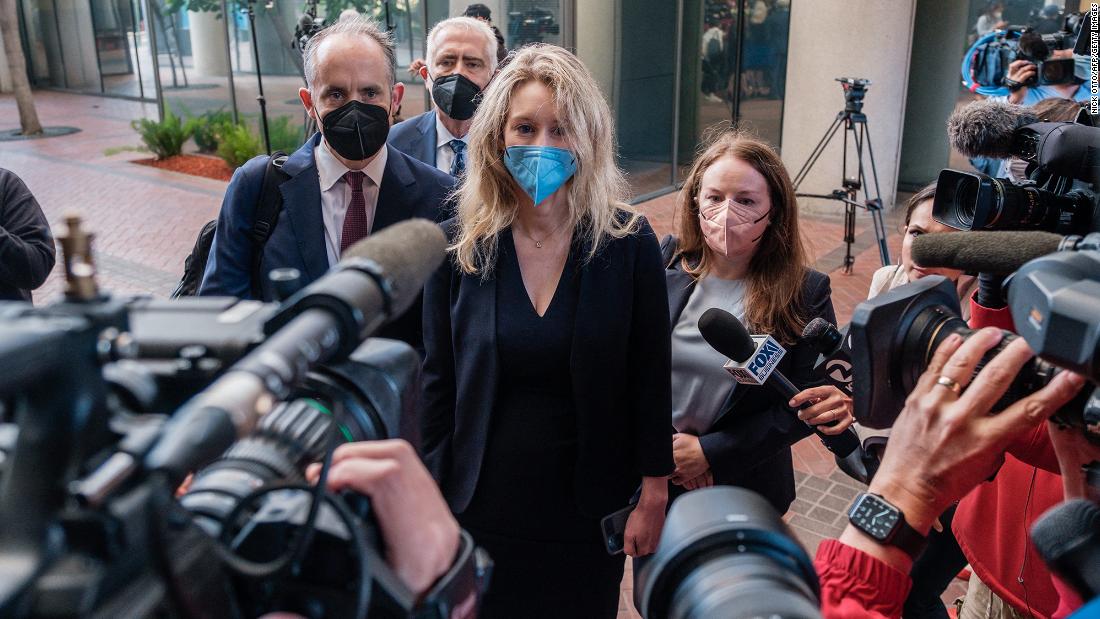 Opening statements are set to begin Wednesday, September 8.
Holmes’ attorneys, federal prosecutors and Judge Edward Davila questioned more than 80 potential jurors in a San Jose federal courtroom over the course of two days about everything from their consumption of media pertaining to Holmes, Theranos, and the trial to their feelings on law enforcement, and whether they or any loved ones have experienced domestic abuse.
Holmes, who was present for both days of questioning as well as when the jury was selected, was indicted more than three years ago on a dozen federal fraud and conspiracy charges over allegations she knowingly misled investors, patients, and doctors about the capabilities of her company’s proprietary blood testing technology. She has pleaded not guilty and faces up to 20 years in prison.
The trial, which has been delayed several times due to the ongoing pandemic and further postponed due to the birth of Holmes’ first child in July, is expected to last roughly 13 weeks.
A deluge of media coverage of Holmes over the years, which has only ramped up ahead of her trial, was a significant concern in finding fair and impartial jurors. The many interwoven factors of the case, which touches on healthcare and technology, as well as allegations of intimate partner violence, also complicated the search for jurors who will ultimately determine Holmes’ fate.
(Among those excused: a retired registered nurse married to a retired lab technician who was familiar with the company’s story; a person who worked at Safeway, a once partner to Theranos; another who said she was an attorney representing domestic violence survivors, who had listened to a podcast about the company with her husband, a scientist for a biotech company.)
In the company’s heyday, Holmes, 37, was the subject of much fascination. A Stanford University dropout with a stated fear of needles, she founded Theranos in 2003 at age 19 to revolutionize blood testing. She’d raised hundreds of millions of dollars from high-profile individuals including media mogul Rupert Murdoch, Oracle founder Larry Ellison, Walmart’s Walton family, and former Secretary of Education Betsy DeVos. She was lauded on magazine covers as the richest self-made woman and “the next Steve Jobs,” an image she helped cultivate by dressing the part in her signature black turtleneck. At its peak, her startup was valued at $9 billion.
Her company’s downfall, spurred by reporter John Carreyrou’s 2015 investigation for the Wall Street Journal, hasn’t dimmed that spotlight — with documentaries, a forthcoming limited series, and a planned feature film to at least two podcasts devoted to covering the trial. Ahead of jury selection, nearly 200 prospective jurors completed the 28-page-long final jury questionnaire. Roughly half indicated in their responses that they had consumed media concerning the case, according to a court filing last week.
Many, however, were brought in anyway and further questioned on the matter. One potential juror said she’d gone down a YouTube “rabbit hole” about Holmes and Theranos; another said he’d read “innumerable” articles about the company, acknowledging that he’d formed a strong opinion prior to being summoned for the trial. (Both were dismissed.)
Potential jurors were also asked about whether they had any experience with intimate partner violence, with many sharing their own accounts and some getting emotional as they recalled their stories.
The topic’s relevance was made clear when the court unsealed documents over the weekend revealing that she may claim she experienced a decade-long abusive relationship with her ex-boyfriend, Ramesh “Sunny” Balwani, also a former Theranos executive, as part of her defense.
Balwani and Holmes were charged together but successfully pushed to be tried separately. His trial is set to begin in early 2022. (Balwani has also pleaded not guilty and according to a court filing he “adamantly denies” the abuse claims.) Members of Balwani’s defense team were present throughout jury selection.
Legal experts say questions central to the trial will concern what Holmes knew, when she knew it, and whether she intended to deceive. Holmes’ attorneys indicated in the recently unsealed documents that she is “likely to testify herself to the reasons why she believed, relied on, and deferred to Mr. Balwani,” a potentially risky move according to legal experts.
Carreyrou, who is hosting a podcast called “Bad Blood: The Final Chapter” that focuses on Holmes’ trial, told CNN Business that he believes she’ll take the stand. “She’s a very convincing public speaker. She has great charm and charisma,” said Carreyrou. “It’s a risky move because then she’ll be cross-examined and cross-examinations are brutal. But, knowing her, I think she’s going to take that risk.”
Share

Eight days after the blaze broke out in El Dor