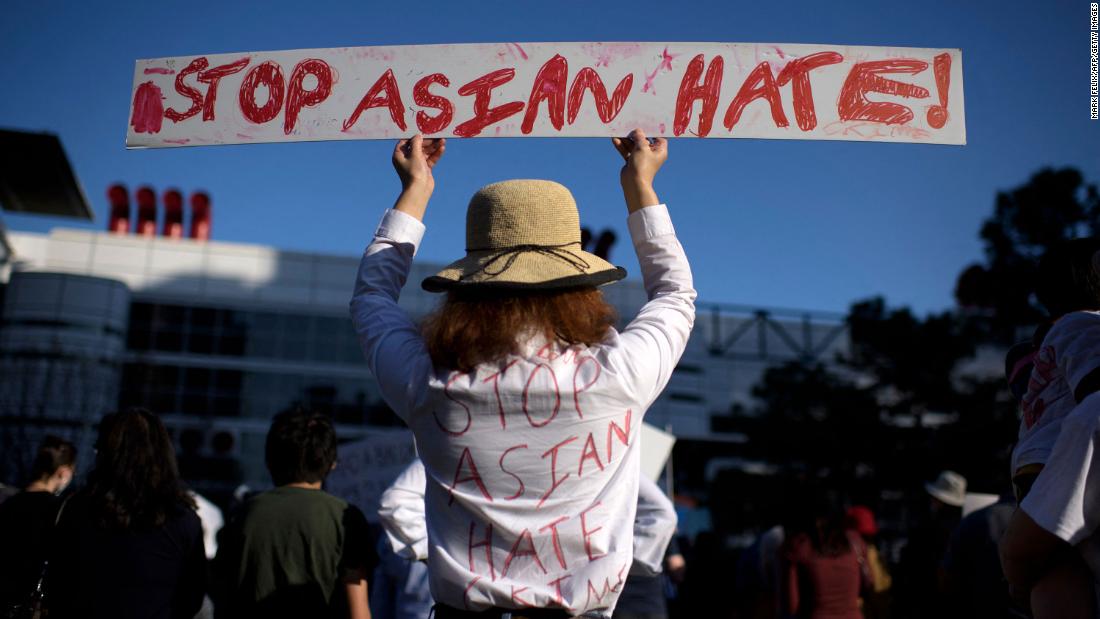 The report, released on Monday, found more than 7,700 criminal hate crime incidents were reported to the FBI in 2020, an increase of about 450 incidents over 2019. The increase comes even as fewer agencies reported hate crime incidents in their jurisdictions to the FBI than in previous years.
Last year had the highest tally of reported hate crime incidents since 2008, when 7,783 incidents were reported to the FBI.
Attacks targeting Black people rose to 2,755 from 1,930, and the number targeting Asians jumped to 274 from 161, the data showed.
The data released on Monday showed that bias against African Americans overwhelmingly comprised the largest category of reported hate crime offenses pertaining to race, with a total of 56% of those crimes motivated by anti-Black or African American bias. Asians have been targeted during the Covid-19 pandemic amid online and political rhetoric stigmatizing them, though this category of hate crime is often underreported.
The category of hate crime incidents where a victim was targeted because of their race, ethnicity or ancestry had the highest increase between 2019 and 2020, with 4,939 incidents in 2020 compared to 3,954 the previous year.
According to the FBI report, 62% of victims were targeted because of their race or ethnicity, up from 58% in 2019. About 20% were victimized because of sexual-orientation bias in 2020, and 13% because of religious bias, the FBI said.
Overall, more than 10,500 people reported that they were victims of a hate crime motivated by a single bias, and 333 were victims of crimes motivated by different biases.
Of the known offenders, more than half were White, according to the FBI.
The Justice Department and FBI are required by a 1990 federal law called the Hate Crime Statistics Act to publish an annual report on hate crime statistics. The annual report serves as the most comprehensive look at hate crime across the country.
These statistics are likely a vast undercount because law enforcement agencies are not required to submit their data to the FBI for their annual crime report. There are more than 18,000 agencies in the United States and more than 3,000 did not submit their crime statistics in 2020.
The FBI’s data may also be incomplete because in some jurisdictions, local prosecutors, not police, decide what is charged as a hate crime. The federal government does not collect hate crime statistics from local prosecutors or courts.
Attorney General Merrick Garland on Monday said in statement that preventing and responding to hate crimes are among the Justice Department’s top priorities.
“These statistics show a rise in hate crimes committed against Black and African-Americans, already the group most often victimized, he said. “Notably, they show a rise in hate crimes committed against members of the Asian-American Pacific Islander community. This also confirms what we have seen and heard through our work and from our partners.”

Scope of the problem hard to capture

Hate crime and bias incident data released by police departments and federal agencies is just a fraction of actual incidents, and deficiencies in hate-crime reporting have led organizers and activists to take it upon themselves to collect data on their own. Even then, the definitions of hate crime may differ, leaving policymakers with competing datasets that don’t capture the scope of the problem.
A recent Stop AAPI Hate report by a coalition tracking racism and discrimination against Asian Americans shows there were at least 4,533 incidents in the first six months of the year and advocates say numerous other attacks have taken place over the summer. The report showed it has received 9,081 firsthand complaints between March 19 of last year and June 30. The organization has previously said it doesn’t independently verify any of the reports it receives, but that its total number of incidents only includes those reports that came with a description.
The majority of the incidents — about 63.7% — were cases of verbal harassment, while shunning or avoidance made up about 16.5%. About 13.7% of the incidents involved physical assaults, according to Stop AAPI Hate.
Among those saying they’ve experienced bias, women accounted for 63.3% of all reports and 48.1% said the incidents involved “at least one hateful statement regarding anti-China and/or anti-immigrant rhetoric,” the coalition said.
Since the beginning of the Covid-19 pandemic, thousands of people in the United States have been victims of anti-Asian incidents, from verbal abuse to physical attacks. More than a year later, Asian American advocates fear that even more women, children and seniors will be at risk as the nation slowly returns to schools, workplaces and outdoor activities this fall.
Last week, the US intelligence community reached an inconclusive assessment about the origin of the Covid-19 virus following a 90-day investigation ordered by President Joe Biden, according to an unclassified summary of the probe released publicly on Friday.
Asian American leaders were concerned that the report on the origins of the Covid-19 would be used to “legitimize racist language” and lead to more anti-Asian violence across the country.
The intelligence community is still divided about which of the two theories — that the virus came from a lab leak or that it jumped from animal to human naturally — is likely to be correct, the intelligence community said. There is consensus among the intelligence agencies that the two prevailing theories are plausible, according to the summary released by the Office of the Director of National Intelligence.
“All agencies assess that two hypotheses are plausible: natural exposure to an infected animal and laboratory-associated incident,” the intelligence community wrote.
The unclassified report, two-page report, was released Friday by the intelligence community after Biden had asked intelligence agencies to “redouble” their efforts to determine how the Covid-19 pandemic began.

CNN’s Nicole Chavez and Jeremy Herb contributed to this report.

Asked by CNN’s Jake Tapper on “The