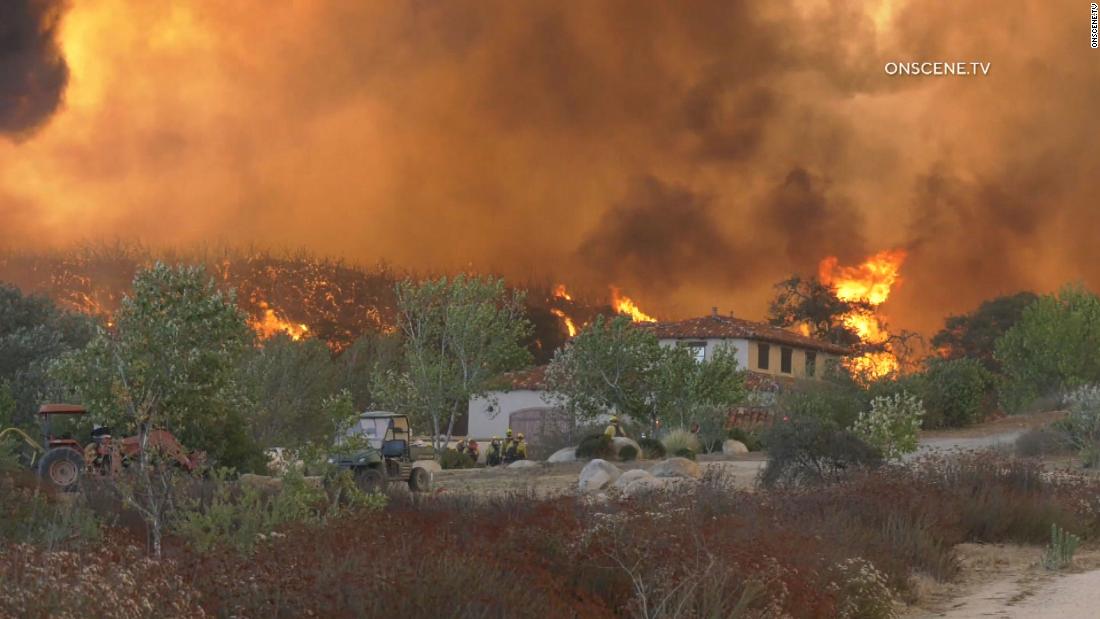 The Chaparral Fire burning southwest of Murrieta began around midday Saturday and has burned more than 1,400 acres in Riverside and San Diego counties; it’s 10% contained as of Sunday.
According to Cal Fire, the wildfire forced evacuations for people living “North of Tenaja Truck Trl, South of Calle Cielo, East of Calle Collado, and West of Calle Be Bietol” as well as prompting warnings for residents in an adjacent area bordering the Cleveland National Forest to “leave now.”
There are 150 firefighters, 23 engine companies, two helicopters and four air tankers battling the blaze, which grew from a little more than 20 acres to 1,200 acres in less than six hours, Cal Fire said.
The cause of the fire is under investigation.

On Friday, officials warned that weather conditions in California through the weekend could be dangerous for fire activity, potentially making the state’s wildfire season even more devastating.
California wildfires have scorched more than 1.66 million acres this year, according to Cal Fire, an area larger than the state of Delaware, and red flag and excessive heat warnings in effect for much of California could present additional challenges.
A red flag warning is issued when imminent weather conditions may result in extreme fire behavior within 24 hours. Those conditions include low relative humidity, strong winds, dry fuels and/or the possibility of dry lightning strikes, according to Cal Fire. Air quality alerts are also in effect for parts of California due to the smoke.
The Caldor Fire, which has been burning east of Sacramento for more than two weeks, is state’s number one priority, Cal Fire said.
The fire “could spread rapidly into more populated communities,” Bryan May, public information officer for the California Governor’s Office of Emergency Services, said in a video posted on Twitter. It has burned more than 156,000 acres and is 19% contained.
The state’s largest active wildfire, the Dixie Fire, has scorched more than 764,000 acres and is 48% contained after sparking more than six weeks ago, according to Cal Fire. The fire stretches across five counties: Plumas, Lassen, Butte, Tehama and Shasta.
Fires are also burning across the western US in Washington, Oregon, Idaho, Montana, Utah, Colorado, Wyoming, Arizona, and New Mexico, according to InciWeb.
In Minnesota, a number of fires are burning in Superior National Forest near the Canadian border, including the Greenwood Fire, which has scorched more than 25,900 acres and is only 14% contained.
Track active wildfires and air quality at CNN.com/wildfires.
Share

The White House announced Thursday that the rev