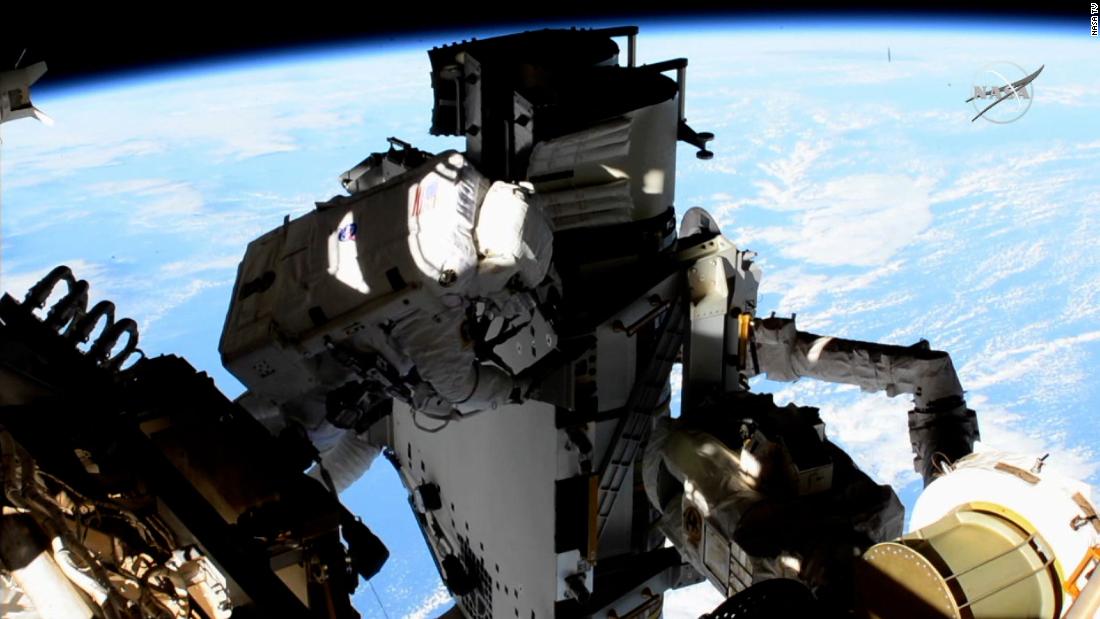 The spacewalk came days after facing “technical delays” during a spacewalk on Wednesday. The astronauts carried over some of Wednesday’s work that was left unfinished due to the issues.
The walk began at about 8 a.m. ET Sunday and lasted for six hours and 28 minutes, NASA said. The astronauts successfully unfolded the solar array, bolted it into place and connected cables to the station’s power supply, according to NASA. They also removed and stowed hardware in preparation for installing another solar array at a future spacewalk.
Pesquet wore red stripes on his spacesuit as extravehicular crew member 1 and Kimbrough wore the suit without stripes as extravehicular crew member 2.
During the nearly seven-hour spacewalk on Wednesday, Kimbrough and Pesquet were slated to install the first two out of six ISS Roll-Out Solar Arrays, called iROSAs, which will upgrade six of the eight power channels on the space station.
But the astronauts encountered several issues. About three hours into the spacewalk, Kimbrough lost data on his spacesuit’s display unit and was required to go back to the space station’s airlock to reboot the system and get it back in working order. Then there was a momentary spike in the pressure reading on Kimbrough’s spacesuit, which was stabilized shortly after but cost the astronauts precious time.
Then, after the astronauts moved the solar arrays to a mounting bracket, one panel was not aligning on the bracket when unfolded, according to Gary Jordan, a NASA public affairs officer. The spacewalkers took pictures for evaluation by ground teams and ran out of time to complete the last steps — installing electrical cables and the final two bolts that would allow the solar arrays to unfurl.
The astronauts were then instructed to fold the array back up and “bolt it in place in a safe configuration,” where it remains for the time being, said Rob Navias, a NASA public affairs officer, during a webcast of the spacewalk Wednesday.
During Sunday’s spacewalk, the astronauts were tasked with installing the electrical cables and final two bolts so the solar array could fully unfurl and begin providing power to the space station. This is the 240th spacewalk in support of assembling, maintaining and upgrading the station.
The solar arrays arrived at the space station on June 5 after launching on the 22nd SpaceX Dragon cargo resupply mission. The space station’s robotic Canadarm2 was used to remove the solar arrays from the spacecraft last week. The arrays are rolled up like carpet and are 750 pounds (340 kilograms) and 10 feet (3 meters) wide.
Once the arrays are unfurled and bolted into place by the astronauts, they will be about 63 feet (19 meters) long and 20 feet (6 meters) wide. This unfurling process takes about six minutes.
To protect the astronauts since they are working around electrical connectors, the ground crew has been busy conducting a plasma forecast to determine what kind of electrical charge the space station will be in during the walk, according to Kieth Johnson, spacewalk officer. Metallic aspects of the spacesuits will be covered to prevent metal contact that could cause electric shock.

This will be the eighth career spacewalk for Kimbrough and the fourth for Pesquet. These spacewalks aren’t the first time these two have ventured outside the space station together.
Kimbrough and Pesquet were on the space station in 2017 and previously conducted two spacewalks together to replace aging nickel-hydrogen batteries with new, longer-lasting lithium-ion batteries.
While the current solar arrays on the space station are still functioning, they have been supplying power there for more than 20 years and are showing some signs of wear after long-term exposure to the space environment. The arrays were originally designed to last 15 years.
Erosion can be caused by thruster plumes, which come from both the station’s thrusters as well as the crew and cargo vehicles that come and go from the station, said Dana Weigel, deputy manager of the International Space Station Program.
“The other factor that affects our solar arrays is micrometeorite debris. The arrays are made of a lot of small power strings, and over time those power strings can degrade if they’re hit by debris,” she said.
The new solar arrays will be placed in front of the current ones. This will increase the space station’s total available power from 160 kilowatts to 215 kilowatts. It’s also a good test for the new solar arrays because this same design will power parts of the Gateway lunar outpost, which will help humans return to the moon through NASA’s Artemis program in 2024.
“The exposed portion of the old arrays will still be generating power in parallel with the new arrays, but those new Iris arrays have solar cells on them that are more efficient than our original cells,” Weigel said. “They have a higher energy density and together in combination may generate more power than what our original array, when it was new, did on its own.”
The new arrays will have a similar 15-year expected life span. However, since the degradation on the original arrays was expected to be worse, the team will monitor the new arrays to test their true longevity because they may last longer.