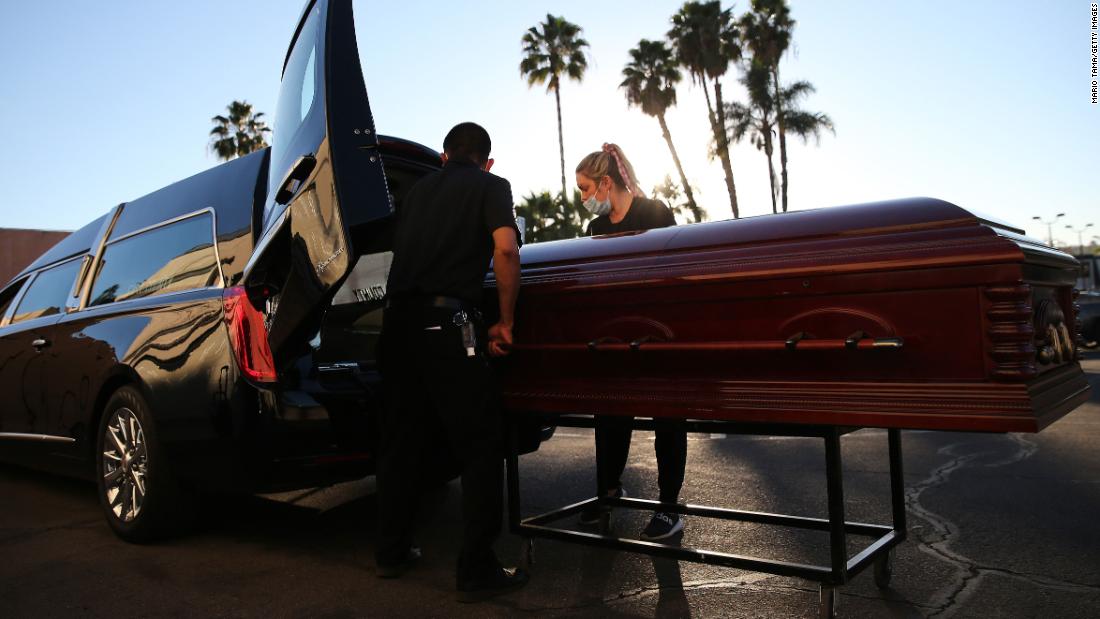 And then he waited. And waited. And waited.
Harrington, who paid more than $11,000 for his father’s funeral, called FEMA every week but the staffers couldn’t tell him when he might receive the funds. The Danvers, Massachusetts, resident reached out to elected officials too as he grew increasingly frustrated.
Finally, in June, he received the reimbursement of $9,000, the maximum FEMA provides for each loved one who died of Covid-19. He’s now more understanding of the time it took to process his application.
“It let me pay off bills, let me get back on my feet,” said Harrington, a community manager for an affordable housing division of a real estate developer. “I got my money. I didn’t have to wait a year. So I’m happy.”
Harrington is among the more than 135,000 people who’ve been helped so far by the funeral assistance program, which Congress established as part of its coronavirus relief legislation. The effort got off to a rocky start, but the agency has approved about 55% of the nearly 247,500 applications it’s received and has doled out more than $888 million, as of August 2.
Minnesota residents have had the highest percentage of their applications approved, at 64%, followed by Oklahoma residents at 63%. Applicants in Alaska, the District of Columbia and Montana each had among the lowest shares, with about 44% of their claims approved, along with Puerto Rico at 43%.

A bumpy rollout and other complications

While FEMA has aided families with disaster-related burial costs in the past, the Covid-19 effort is the largest of its type. Some $2 billion was allocated as part of the $900 billion relief deal Congress approved in December, while the Democrats’ $1.9 trillion package in March bolstered the program by providing the agency with an additional $50 billion to use for coronavirus-related costs.
The reimbursement covers the transfer of remains, burial plot, casket, clergy services, cremation and headstone, among other expenses, for deaths that occurred in the US.
RELATED: Here’s what’s in the Covid relief package
FEMA opted to register applicants by phone rather than online because of the sensitive nature of the program. However, the hotline’s launch was initially plagued by busy signals and technical issues — the agency received more than 1 million calls on the first day.
Then-acting Administrator Robert Fenton later acknowledged the bumpy rollout in a congressional hearing but said the agency “cleaned that up by the second day.”
Another issue that arose was over death certificate documentation. Originally, FEMA required the death certificate to reflect that the death was attributed to or likely caused by Covid-19. But that did not capture those who passed away early in the pandemic when Covid-19 was rarely, if ever, noted as the cause of death. In late June, the agency changed its interim policy to allow applicants to attach a letter to the death certificate from the medical examiner or coroner explaining the link to Covid-19 for those who died between January 20 and May 16, 2020.

What frustrated some applicants the most was the lack of communication from the agency after they applied.
For Julie Boss, the main issue was that FEMA didn’t acknowledge receiving the documents detailing the funeral expenses for her father, Hill, a retired high school teacher who died in a nursing home from Covid-19 in May 2020 three days shy of his 91st birthday. The Boston resident had some trouble getting through to a representative by phone at first but eventually did. She mailed the paperwork in early May but then resubmitted it online after not getting any confirmation that her package arrived at the agency.
In early June, Boss called the FEMA hotline and was told all her documents were in order. A few weeks later, a deposit for nearly $7,000 appeared in her bank account.
“I probably got paid sooner than I was expecting,” said Boss, noting that FEMA’s agents were always very accommodating and pleasant.
Boss plans to use the funds to pay off the debt she and her brother, Mike, incurred for their father’s funeral, but she is also hoping they can file for the cost of the headstone once it is placed.
Evelyn Smith’s experience with the program has been less smooth. The Wake Village, Texas, resident initially gave up trying to reach a representative on the phone to file for the cost to bury her husband, Donald, a grocery store manager who died in June 2020 at age 82 from Covid-19.
A week or so later, she got through and started the application process. Smith was left with the impression that FEMA would mail her a letter requesting documentation. She called back after a few weeks and learned that the details of what she’d need to send in to complete the application were available online. She faxed the paperwork in June and, about three weeks later, received a payment of $3,500 to cover the cost of cremation and the funeral home.
But the agency did not reimburse her for the nearly $1,100 she paid for the burial plot and headstone, even though the FEMA website lists those as eligible expenses. She filed an appeal online and planned to follow up with a written version.
After CNN inquired about Smith’s application, a FEMA agent contacted her and said she would receive payment for the burial plot and headstone as well.
Smith said she is grateful to have received any reimbursement, which she’s using to fix up the couple’s home to sell and move closer to their daughter in San Antonio.
“I live on his Social Security now,” said Smith, who also pet sits to bring in a little more income. “To have those expenses, it was really hard.”
Share

The attack happened near a location co

At issue is the Chamber of Commerce’s fi