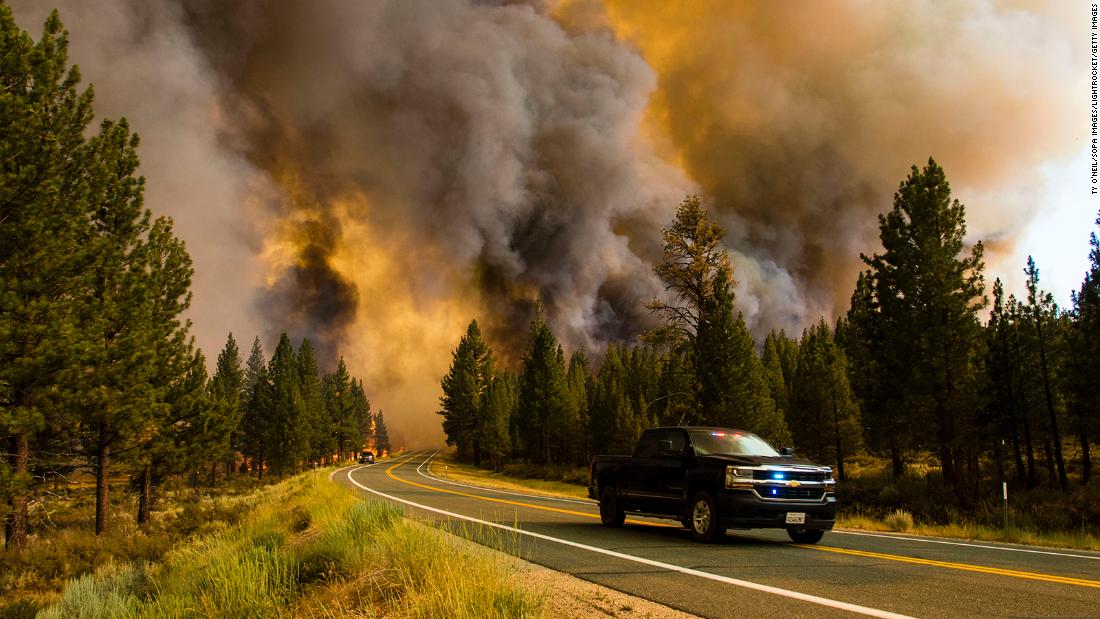 The fires have caused power outages, destroyed structures and prompted the deployment of the Oregon National Guard.
As extreme drought still grips most of the West and the fires have become so intense they’ve created their own weather systems, the threat of more fires remains.
In Oregon — where eight fires have burned nearly 475,000 acres — officials said the current fire season is unlike any they’ve seen before.
“I would categorize this fire season thus far as historic in terms of the amount of resources we’ve deployed, how many times we’ve deployed — within a three-week period we’ve mobilized to six conflagrations — and this is the earliest and most significant mobilization to date,” Mariana Ruiz-Temple with the Oregon Fire Marshall’s office said Tuesday.
At least 1.29 million acres have burned in 83 large fires across 13 states as of Tuesday, according to an update from the National Interagency Fire Center (NIFC). More than 19,000 wildland firefighters and support personnel have been deployed to deal with the blazes.
Advisories for elevated fire potential and activity have been issued across Idaho, California, Oregon and the Northern Rockies, according to NIFC.
The effects of the fires stretch all the way to the East Coast. Extraordinary plumes of wildfire smoke are billowing out of these massive complexes, reaching so far up into the atmosphere that they are being carried thousands of miles east by high-level winds.
It’s not just fires in the US contributing to the smokey haze. The Canadian province of British Columbia declared a state of emergency due to wildfires there that will go into effect Wednesday. Nearly 300 active wildfires have been reported in the province.

Bootleg Fire is largest in country

In Oregon, record-breaking, triple-digit temperatures and severe drought have devastated parts of the state.
The conditions are fueling the Bootleg Fire in southern Oregon, which is the largest burning wildfire in the country. The Bootleg Fire has scorched 388,360 acres and prompted evacuations with only 32% containment, according to Inciweb, the US clearinghouse for wildfire information.
Oregon Gov. Kate Brown cited recent fires, ice storms, record-breaking high temperatures and drought emergencies as evidence that climate change is impacting her state.
“There’s absolutely no question that climate change is playing out for before our eyes,” Brown said at a news conference Tuesday. “We saw the heat dome event a few weeks ago; we unfortunately lost a lot of Oregonians through that event. In February, we saw devastating ice storms, over a half a million people lost power last fall, as you are well aware; we’ve had unprecedented wildfires.”
Fire potential in the state is being driven by drought conditions, with 90% of the Oregon in either exceptional, extreme or severe drought, Doug Grafe, chief of fire protection at the Oregon Department of Forestry said while forecasting a “long, difficult fire season.”
He said it’s possible that another 50,000 to 100,000 acres could burn before the Bootleg Fire is contained.
“The future for us for the remainder of the season continues to look above normal dry and above normal temperatures,” Graffe said. “So this is not going to return to normal anytime soon.”
CNN meteorologist Michael Guy said Red Flag warnings in the area will continue through Wednesday, signaling dry and windy conditions with lots of smoke. After Thursday, the skies will clear, which could help slow the fire’s spread.
As a result of the fires, 62 members of the Oregon National Guard have been deployed, along with Blackhawk helicopters to provide water drops, fire spotting and medivac support, Major General Michael E. Stencel, Adjutant General of the Oregon National Guard said.
In addition to feeding fires, Oregon’s hot, dry conditions are also impacting Christmas trees grown in the state.
“It’s killing them,” Jacob Hemphill, a Christmas tree farmer in Clackamas County, said of the relentless heat this summer. “It’s horrible, there is nothing we can do.”
Unusually warm temperatures and severe dryness this year have caused irreversible burns on many trees, resulting in fewer trees to choose from this upcoming holiday season as well as potentially higher prices, growers said.

California’s Dixie Fire may have been sparked by electrical equipment

Further south, the Dixie Fire has burned more than 61,376 acres in Butte County, California, after igniting on July 13, according to Inciweb. It is approximately 15% contained.
Butte County is the site of California’s deadliest and most destructive wildfire in 2018, the Camp Fire. It burned a total of 153,336 acres, destroyed 18,804 structures, and killed 85 people.
The Dixie Fire is so intense, it produced a thunderstorm, Incident Meteorologist Julia Ruthford said in a briefing Monday night. “The fire actually generated a thunderstorm over itself that led to some lightning out ahead of it and some really gusty and erratic winds due to that extreme, extreme conditions due to the thunderstorm overhead,” she said.
Evacuations have been ordered in the area and the fire already destroyed two structures and threatens more than 800 others.
On Tuesday, Pacific Gas and Electric (PG&E) said the fire may have been sparked by equipment it manages.
In a preliminary filing with the California Public Utilities Commission, PG&E detailed an outage alert July 13, the same day the fire started. A responding utility worker found three blown fuses and a tree leaning into a pole, with a small fire on the ground near the base of the tree.
The fire was reported to authorities and California Fire and Protection sent aerial firefighters to douse the flames, which had jumped from an initial estimate of 1-2 acres, to 10-15, according to the filing.
Since then, the fire has grown exponentially, burning in “remote areas with limited access and steep terrain,” Cal Fire said, which is hampering access by ground crews.
In a news release issued Tuesday night, Cal Fire said the Dixie Fire would be active overnight and additional firefighting resources would be arriving on scene.
Near the California-Nevada border, the Tamarack Fire, has grown to nearly 39,045 after sparking July 4, according to information from InciWeb.
A lightning strike near the Alpine County, California, community of Markleeville started the fire, which has triggered mandatory evacuations for a number of campgrounds and neighborhoods in the area, and prompted road closures.

Medicaid enrollees will no longer have to prove

“We have got to fundamentally change the