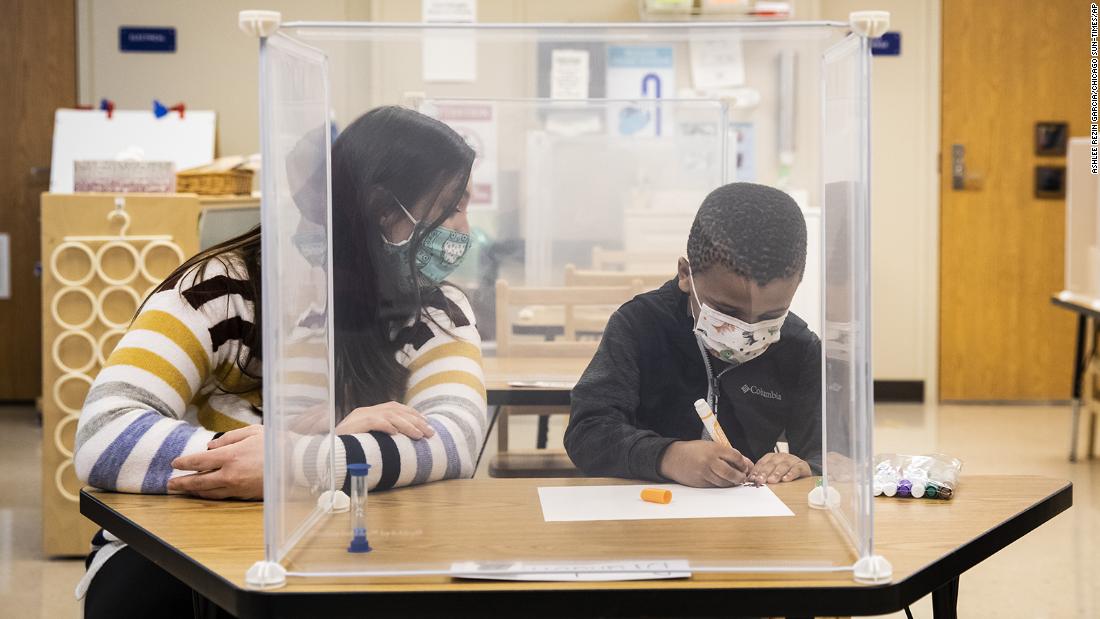 About 67,000 students — 62,000 who are in grades K-8 — had indicated to the Chicago Public Schools (CPS) district that they intend to return on February 1. The district, the nation’s 3rd largest, served about 355,000 students during the 2019-2020 school year.
CPS officials, including CEO Janice Jackson, have said the district has plans to mitigate the spread of any coronavirus outbreaks in schools. She and other school officials believe it’s time to get everyone back to the classroom.
However, the CTU has raised concerns that with the ongoing pandemic, teachers and students remain at risk if they return to the classroom too soon. 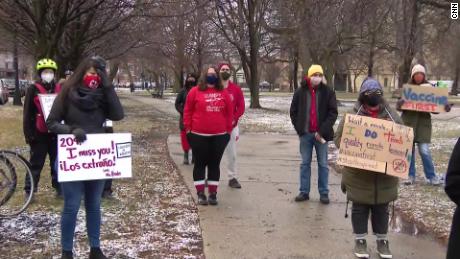 In a letter sent to families of students on Sunday evening and obtained by CNN, CPS officials said they have met with the union “more than 70 times in an effort to reach an agreement that prevents disruption to student learning and provides families the option to safely return to classrooms.”
School officials said beginning on Monday, “teachers in pre-k through 8 and cluster classrooms who do not report to work in-person — and do not have a valid reason for their absence — will be considered absent without leave. On Tuesday, teachers who are absent without leave will not be authorized to support remote learning until they report in-person as required.”
The CTU had previously told its members to be prepared to strike if the school district retaliated for teachers choosing to continue teaching online.
The union and CPS on Saturday “reached a set of agreements” that were “important steps forward” — but “have made no meaningful progress” since, school officials said in the letter.
“We remain committed to getting a deal done, but CTU leadership’s lack of urgency to find a resolution that meets the needs of our students and staff is deeply disappointing for all of us,” school officials wrote.
Chicago Mayor Lori Lightfoot insisted on Sunday that schools could safely reopen, noting that the district had “met or exceeded” the Covid-19 protocols put in place in other school systems to help mitigate the spread of Covid-19.
“We will stay up all night to get a deal done,” Lightfoot said during a news conference, adding that she wants to see a “renewed sense of urgency” from the union.
CTU President Jesse Sharkey said during a virtual news conference on Sunday that the union is “disappointed” about the way negotiations with Lightfoot and Jackson have gone.

Union, school officials have yet to agree on some issues

On Saturday, the union said it had reached tentative agreements on four “key areas,” including health and safety protocols and contact tracing.
But both sides have yet to agree on issues like access to a vaccine prior to beginning in-person work, as well as a public health metric to guide the reopening.
“What our members are asking for is right in line with what school districts are doing across the country,” CTU said in a tweet on Sunday. “Our union has also successfully been able to reach agreements with our unionized charter schools. We want the same for our educators and students in Chicago Public Schools.”
Negotiations were expected to continue on Sunday, but they never happened, and both sides publicly disagreed over why that was.
Lightfoot’s news conference came after CTU said on Twitter it hadn’t met with negotiators on the other side.
“The CPS bargaining team was instructed not to attend negotiations today unless our teachers, clinicians, PSRPs, nurses, librarians and other rank-and-file educators were prepared to make major concessions,” it said.
Lightfoot denied that, saying negotiators had been at the bargaining table, waiting to begin.
“We’ve been waiting all day today for in-person negotiations to begin,” she said during the news conference Sunday. “We’ve been waiting on the CTU.”
The union said in a statement that its “officers and attorneys” had “waited for hours for CPS to join them in bargaining” on Sunday.
Lightfoot spoke with Sharkey in a “cordial” phone call Sunday afternoon, both CPS and CTU officials said.
Sharkey said that although he was disappointed in the outcome of the meeting, the union will continue to bargain.
“We’re not seeing the compromises at the table we would need in order to get agreement on what we think are just a handful of important issues,” he said during the virtual news conference. “We’re going to stay bargaining and we’re going to stay committed to this process.”
But Sharkey maintained that teachers would not return to in-person learning if their safety was not secured.
“Right now what they’re telling us, and what they’re telling the world, is they’re not going to return back into buildings and agreement that we believe, protects our safety,” Sharkey said.
Stacy Davis Gates, vice president of the CTU, called the outcome of the meeting “disappointing and frustrating,” adding that the safety measures requested by the CTU “are reasonable.”
Gates also denied that CTU would go on strike.
Members of the CTU who were on the virtual news conference also said they hope teachers do not get locked out of Google Suites, the district’s remote learning computer system.
Earlier on Sunday, Jackson had said that could happen. “Teachers and staff that failed to report to school tomorrow will have their access to Google suites cut off at the end of the business day,” she said.

On Sunday morning, Jackson told CNN’s Abby Phillip that “there are still some sticking points we’re trying to negotiate with our partners here in the Chicago Teachers Union,” especially around vaccinations. 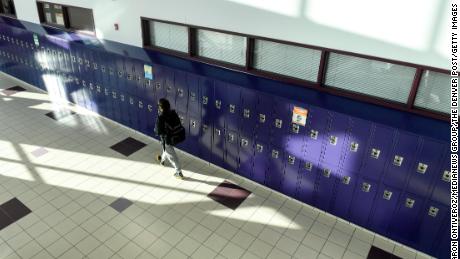 Jackson said officials have been advocating for teachers to be prioritized for vaccines but also said “schools can safely reopen if the proper mitigation strategies are implemented.”
She pointed to new research from the US Centers for Disease Control and Prevention, in which experts noted the spread seen in crowded offices and long-term care facilities has not been reported in schools.
And while in-school transmission has occurred, researchers said there is little evidence that it contributed meaningfully to increased community transmission.
Officials believe the district’s reopening plan “goes above and beyond both state as well as federal mandates for safely reopening schools,” Jackson said.
“We think now is the time to see a return to in-person instruction for those families that wish to have that option,” she told CNN. “But we are also keeping the district open for remote for families who would like to remain in a remote environment as well.”

“Because of Trump’s apparent role

A Georgia county has shut down all 11 of its pu

A man, woman and their 1-year-old child were s

As a result, the lower court ruling allowing s