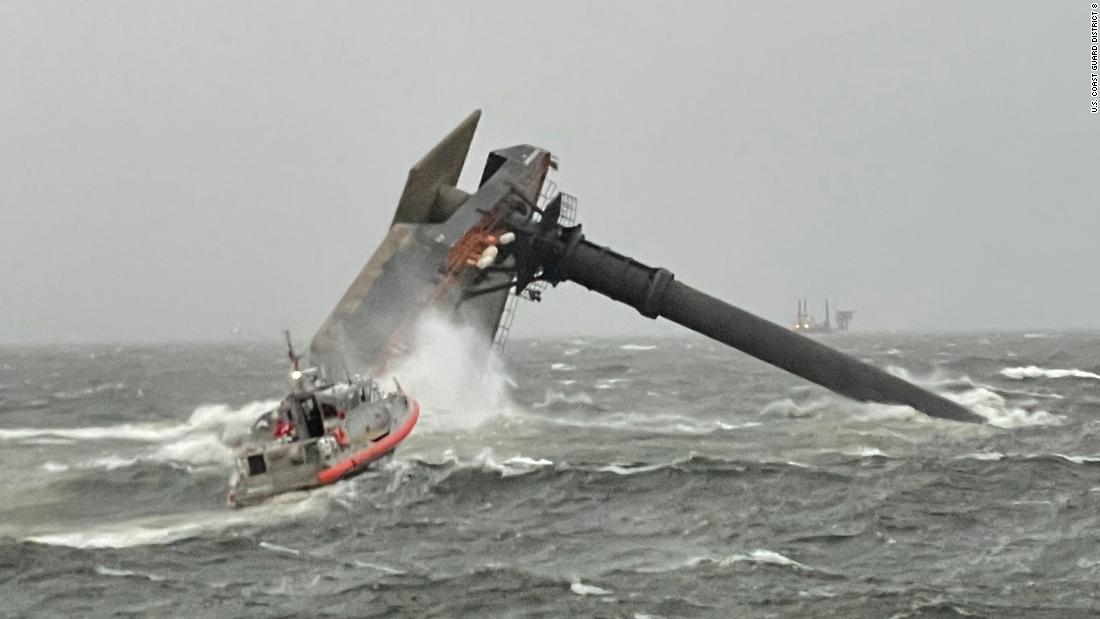 “It`s been a crazy day meteorologically with very impactful winds from both a line of thunderstorms, and a long duration strong wind event due to a wake low,” the National Weather Service office in New Orleans said on Tuesday night.
A stationary front positioned across the Southeast led to a large cluster of thunderstorms moving across Louisiana and other Gulf Coast states on Tuesday.
The weather service office in New Orleans had issued a special marine warning Tuesday about steep waves for the coastal waters in and around Port Fourchon, Louisiana.
Shortly after the 129-foot Seacor Power liftboat, a ship that services oil platforms, left Port Fourchon Tuesday afternoon, it would have encountered a strong line of thunderstorms. The ship was around seven nautical miles south of Port Fourchon when the vessel issued a mayday call just before 4:30 p.m.
A marine warning was issued for the storm, but the system was moving rapidly, perhaps too fast for the ship’s crew to react in a timely manner. The storm also intensified as it moved offshore.
High waves and winds of 40 to 60 mph were reported at nearby land stations, even up to 12 hours after the boat capsized.
A separate ship in the same general area of Port Fourchon measured a wind gust of 102 knots (117 mph), which is equivalent to a Category 3 hurricane.
“The cloud tops reached over 50,000 feet, indicating very strong storms,” said CNN meteorologist Taylor Ward. “Very strong winds were being pulled to the surface and radar data also showed there was rotation embedded within those storms so it is not out of the question that waterspouts could have occurred as well.”
If all of that wasn’t enough, there was also something called “gravity waves” at play.
The weather service noted that gravity waves had been trapped below a strong temperature inversion — an increase of the air temperature with height — just above the surface, roughly the lowest 1,500 feet of the atmosphere. That inversion led to “waves of stronger winds mixing down in gusts over land and sustained gales with storm force gusts over larger water bodies.”
This would have made it even more difficult on any ship in that region, let alone a large one already fighting storm conditions.

Six people were rescued from the water while the bodies of four people have been recovered so far.
Multiple agencies, including US Coast Guard, the Louisiana Department of Wildlife and Fisheries, Lafourche Parish Sheriff’s Office, and other Louisiana groups, are participating in the search and rescue efforts for the nine people still missing. The effort includes helicopters, planes, and boats.
The Coast Guard has been using contracted private divers to perform search and rescue missions the past few days. The weather, however, has not been ideal. Thunderstorms have repeatedly popped up around the search area with gusty winds, small hail, and the potential for waterspouts. Shower and thunderstorm chances remain in the forecast through the weekend, making it more difficult for the search and rescue crews.
“Our rescue crews have been diligently continuing the search and rescue efforts for the missing people from the capsized vessel,” said Capt. Will Watson, commander of Coast Guard Sector New Orleans.
Watson noted that the water temperature is above 70 degrees, and that is an important detail.
According to the US Search and Rescue Task Force, the human body can survive prolonged periods of time in the water as long as the temperature is around or above 70 degrees Fahrenheit. The physical conditions of the person involved also factor in.
So with water temperatures in the low 70s currently around the ship’s location, the temperatures may not exactly be warm, but they are survivable.