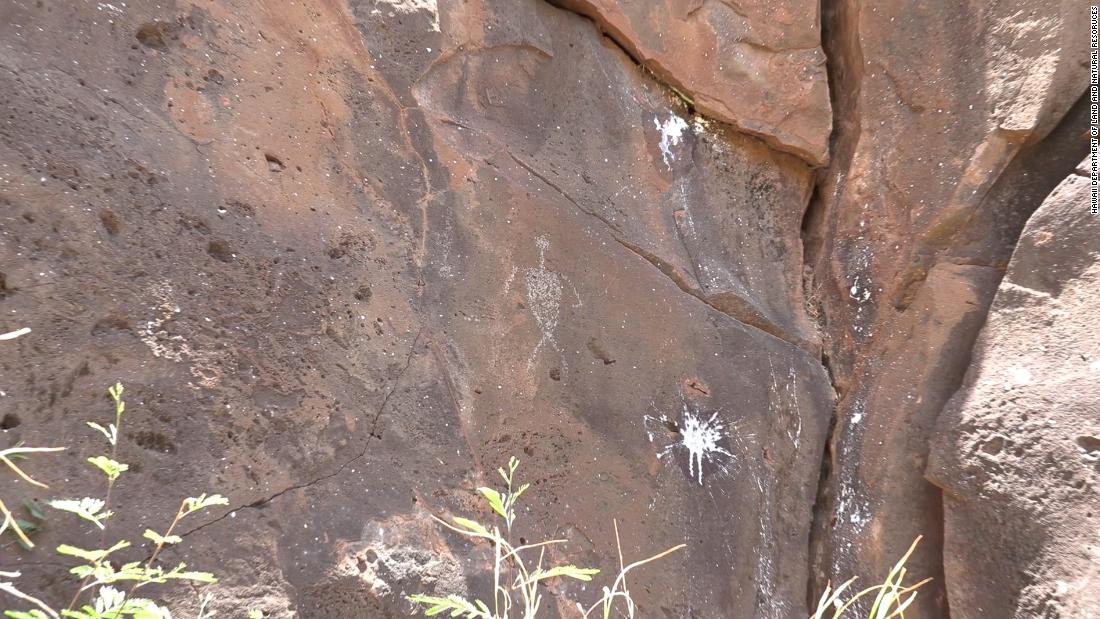 About 100 Hawaiian petroglyphs are spread across the rock face of Pu’u Kilea in the Olowalu Valley, according to Hawaii’s Division of Conservation and Resources Enforcement (DOCARE).
The department was notified of a paintball “attack” on the cliff June 29 and authorities went to investigate on Saturday.
“I would guess several hundred paintballs were shot at this historical site,” DOCARE Lt. John Yamamoto said in a news release from the Hawaii Department of Land and Natural Resources (DLNR).
“White and yellow splotches of paint are spread across nearly the entire cliff face from the top to the base and from one side to the other,” he said. “It’s hurtful to see this kind of disrespect for our culture.”
The rock carvings includes figures of humans and animals as well as canoes and sails. The images chiseled into the rock are estimated to be more than 300 years old, and the petroglyphs are believed to represent legends or stories of the early Hawaiians, according to the release.
The site has been vandalized by graffiti in the past, but DLNR Senior Communications Manager Dan Dennison told CNN it was not as extensive as this incident.
If caught, those responsible could face charges of criminal property damage, in addition to civil penalties, Yamamoto said.
“This is so sad to see. Like many others, I visited this place when I was a young boy,” he said.
Those found to be responsible could face charges of criminal property damage, in addition to civil penalties
Share

The Make-A-Wish Foundation is disputing what it

The state Senate passed the Republican-sponsor

As a result, the McDonough confirmation could