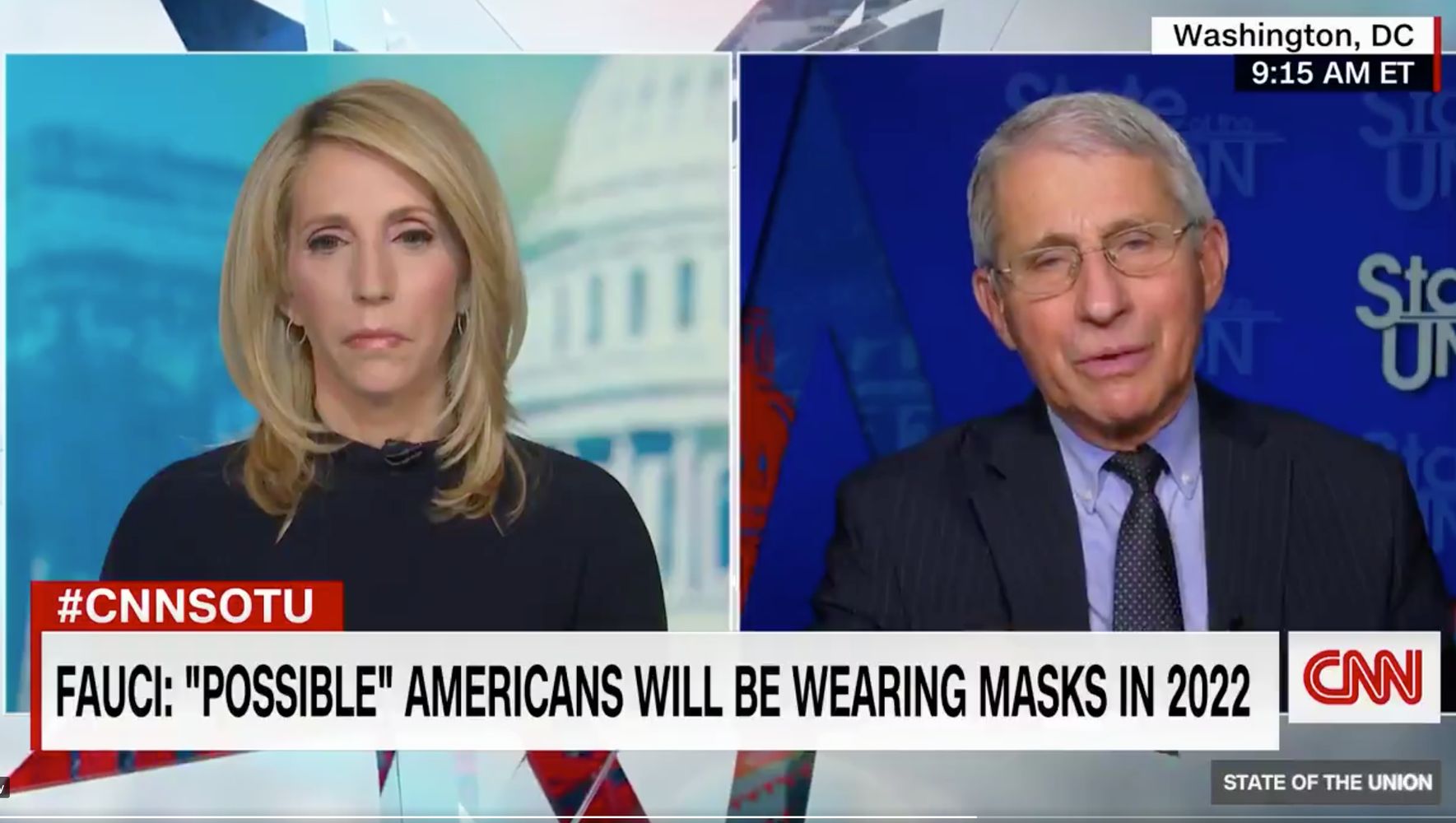 Dr. Anthony Fauci on Sunday projected that the U.S. will be “approaching a degree of normality” by the end of this year, but that we may still be wearing masks in 2022, saying that daily coronavirus case counts are still nowhere near where they need to be.

“Obviously, I think we’re going to have a significant degree of normality beyond the terrible burden that all of us have been through over the last year,” Fauci, the nation’s top infectious diseases expert, said in an interview on CNN’s “State of the Union.” “It may or may not be precisely the way it was in November of 2019 but it will be much, much better than what we’re doing right now.”

People may still need to wear masks next year until daily case counts drop and the overwhelming majority of people are vaccinated, he said.

Dr. Fauci says that it’s “possible” that Americans will be wearing masks in 2022.

“When it goes way down and the overwhelming majority of the people in the population are vaccinated, then I would feel comfortable in saying, you know, ‘We need to pull back on the masks'” #CNNSOTU pic.twitter.com/8Upirj9VGb

“Then I believe you’re going to be able to say you know, for the most part, we don’t necessarily have to wear masks,” he said. “But, if we have a level of virus that is at that level that it was months and months ago — like 20,000 per day is a heck of a lot better than what it’s been. But that’s still very high level of virus in the community.”

The last time the U.S., as a whole, had a daily case count of 20,000 was in March 2020, according to the Centers for Disease Control and Prevention — the same month that COVID-19 was first declared a pandemic by the World Health Organization.

The average daily rate of new coronavirus cases has been significantly dropping since a peak of roughly 315,000 in January. At last count, the U.S. had a seven-day average of more than 70,000 daily cases, according to the CDC.

Fauci stressed that he doesn’t want to make any concrete projections because a lot of variables that could change things, including different variants of the virus. (The CDC has said there are variants from the U.K., Brazil and South Africa in the U.S. already.) There have also been vaccination setbacks, like severe winter weather in Texas and surrounding areas, which disrupted vaccine distribution — though Fauci said he expects it to get back on track by the middle of the coming week.

“The number was 6 million doses got delayed. We’ve gotten 2 million out, and we project that by the middle of the week, we will have caught up,” he said in a separate interview Sunday with NBC’s “Meet the Press.”

Asked about the effects of people receiving just one of the two doses of the Pfizer or Moderna vaccine, Fauci said there are too many unknowns and risks for those who have never been infected with the virus and don’t have antibodies for it. However, he said it may be worth examining whether a single dose may be effective for those who have already had COVID-19.

“The data look really quite impressive that, if you’ve been infected and then you get a single dose, the boost that you get with that single dose is really  enormous,” he said. “That is one thing that you may want to consider, but we want to really carefully look at the data first.”

Thoughts and prayers are in order for Rep.