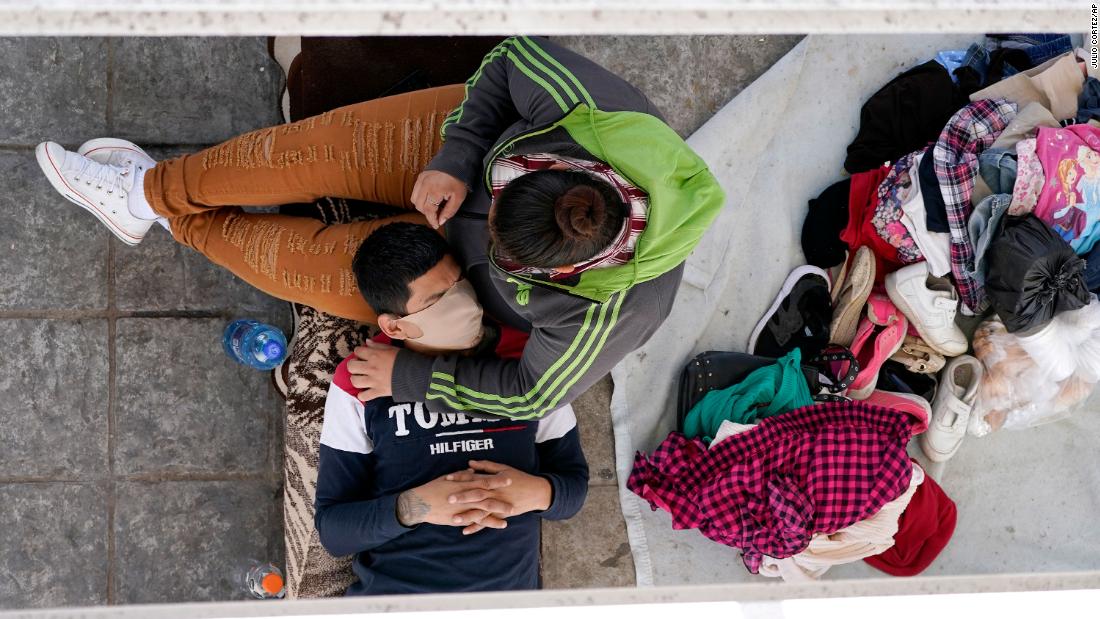 He and his son were just deported. Already, he’s trying to figure out how to cross into the US again.
“I’m going to try to go back to the United States, because things are more difficult in Guatemala,” he says. “I have five children I have to support.”
Like many of the migrants who CNN has spoken with in recent days on the border, Cocoy seems stunned by the way US immigration authorities treated him. His voice cracks as he describes how swiftly he was kicked out of the country where he’d hoped to find work to support his family. “They didn’t let us through,” he says, “and I have to get through.”
On the US side of the border, we’ve seen crowded conditions in detention facilities and large groups of migrants at bus stations after families have been released from custody. But here, on the Mexican side, the scene is dramatically different. Stories like Cocoy’s — and confusion over which migrant families are allowed to stay in the United States and which families get kicked out — are becoming more common.
While officials are letting unaccompanied minors into the United States to make their case for asylum, and letting some families deemed vulnerable cross, too, the Biden administration has said most adults and families are being expelled under the pandemic public health restrictions that remain in place along the border.
Some of those who are sent to Mexico are likely trying to cross again — one factor that could be making the numbers of migrants apprehended at the border shoot up.
A few feet away from Cocoy, Samuel Antonio Sarmiento says he’s also determined to go back across the border with his son and try again. He says the Biden administration’s repeated comments that now is not the time for migrants to travel to the United States aren’t convincing.
“I had to migrate because I was assaulted. … The problem is he (President Joe Biden) doesn’t know the situation you’re in,” Sarmiento says. “I’d rather die here than return to Honduras.”

Some migrants tell CNN they’re shaken and still trying to sort out their next steps. Many are angry their journey into the US was cut short, worried because they have no place to stay in Mexico and confused because they thought things had changed since President Donald Trump left the White House.
“They (US border authorities) treated us very badly. They didn’t even give us the chance to speak,” says Ordelina de Leon Lopez. If she’d had a chance to make her case, de Leon says she would have told authorities that one of her daughters had been kidnapped in Guatemala and she fled the country after facing threats.
“The police there never helped me and I’m a single mother. I have three children to take care of,” she adds. “I came here thinking that they were going to give me support. But we were surprised to find out, no, they rejected us.”
Belinda de Dios Lopez says she’s shaking and hasn’t eaten in the days since her deportation because she has no money to buy food.
“I came because Mr. Biden said that he was going to give us for 100 days the opportunity to enter,” she says. When informed that Biden actually said he would suspend deportations for 100 days, but had warned would-be migrants not to come to the US, she said the President should show more compassion.
“He should be more humanitarian,” she says, “because we are all human and we need more humanity.”
Carmen Julia sobs, saying she left Guatemala with her daughter in late February and turned herself into the Border Patrol as soon as she arrived in the United States because she was advised that would improve her chances to be allowed to stay in the US. Instead she says she was fingerprinted and returned to Mexico in less than 12 hours.
“I have nothing at home,” she says, “no house, no job, no future.”

Honduran Bene Ayala says he, his wife and his 7-year-old son were taken into custody by Border Patrol agents and promptly returned to Mexico. But others in a group he was traveling with were allowed to stay — seemingly because their children were younger.
“It’s unfair. We can see that 5-year-old children can cross with their parents, and 7-year-olds can’t. But 7-year-olds are still children,” he says.
US Customs and Border Protection says it’s still operating under the public health order, known as Title 42, which allows for the removal of immigrants crossing the border to avoid the spread of Covid-19. The agency says migrant parents traveling with children are not exempt from the restrictions, regardless of the child’s age.
When asked to clarify how the agency defines who is vulnerable and whether there’s an age limit used in those determinations, a spokesman said he could not provide that kind of detail.
White House spokeswoman Jen Psaki acknowledged Tuesday that more families are being let into the United States.
“It is largely an issue of Mexico not having the capacity to accept some of these families,” she said. “These circumstances are limited. When they come, they are tested, they’re quarantined as needed. But it’s not a reflection or prediction of a change of policy.”
Migrant families who are allowed to enter the United States face an uncertain journey. Their cases will make their way through immigration court and a judge ultimately will decide whether they can stay.
But for Ayala and other deported migrant families, the future is even murkier.
Like many migrants who CNN met at the border, Ayala says he left Honduras after two powerful hurricanes devastated the region last year. And while they expected the journey would not be easy, he says, they thought that once across the Rio Grande, they’d have a chance to stay.
“(Hurricane) Eta — plus the pandemic — left us with nothing,” he says. “The situation is just as bad as it was when the storm hit. There’s no improvement. People don’t have work. We want to go to work to help there.”

For deported migrants, the future is uncertain

Instead, Ayala and other deportees are left wondering what to do. Mexican authorities recently ordered them to leave the area beside the border bridge, moving them to a city park a couple of blocks away.
Groups are gathering in makeshift encampments. Area shelters are overwhelmed with the large number of migrants arriving and are turning people away.
Other than a small gazebo, there is little shade to protect these migrants from the blistering sun. Food is provided by local churches a couple of times a day. There are no restrooms or additional aid of any type.
It’s unclear what help Mexican authorities may offer. On a national level, officials are facing increasing pressure from the Biden administration to step up immigration enforcement.
Here in this border state, Ricardo Calderon Macias of the Migrant Institute of Tamaulipas says officials are trying to work with the migrants to see who would prefer to go back to their country and who may be eligible to receive a humanitarian visa to stay in Mexico for 30 days.
These migrants say what they fear for the most is their safety — and that their time is running out. Camps along the border in Mexico can be dangerous, and help is in short supply. Just an hour away from here, 16 Guatemalan migrants were killed in January in a massacre that was a devastating reminder of how perilous this journey can be.
“The fear is that they’re going to do something to us,” Ayala says. “Here, we have no one.”

Nine other people were hurt by shrapnel and de