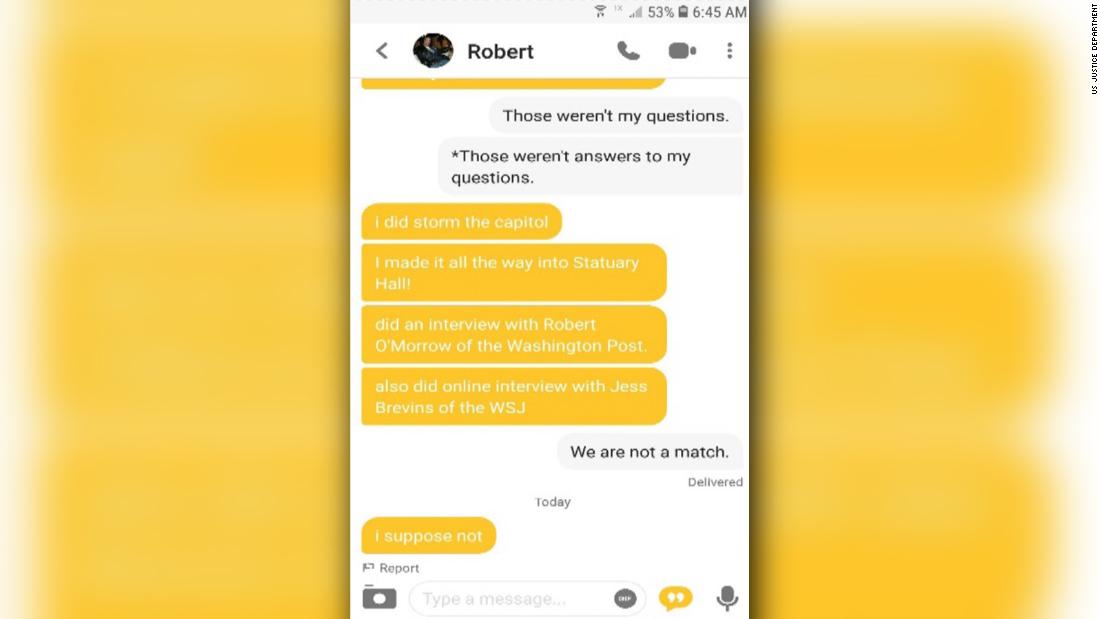 According to court documents, one week after the attack, Robert Chapman of New York told one of his Bumble matches that “I did storm the Capitol” and said that he “made it all the way into Statuary Hall.” He also claimed that he was interviewed by members of the media.
The other Bumble user replied, “we are not a match.”
Prosecutors said the user then quickly reached out to the FBI and provided screenshots of the conversation.
RELATED: Under-the-radar court case helps piece together cop dragging during Capitol riot
Investigators said in court filings that they corroborated Chapman’s claims by comparing his Bumble profile picture to body camera footage from police officers who were inside the Capitol.
Chapman was charged with four misdemeanors, including disorderly conduct on Capitol grounds. He hasn’t entered a plea and his lawyer didn’t respond to a request for comment on the charges.
According to screenshots in court filings, Chapman also posted to Facebook before the January 6 insurrection that he was traveling to the “District of Criminality,” referring to Washington, DC. And on the day of the attack, he allegedly posted, “I’M F—IN INSIDE THE CRAPITOL.”
Incriminating social media posts like these have become a hallmark of the Capitol riot investigation. In dozens of cases, prosecutors quoted rioters’ posts from Facebook, Twitter, TikTok, Parler, Snapchat, and other sites where they bragged about their alleged crimes.
More than 390 people have been charged with federal crimes in connection with the attack.
According to court records, Chapman was arrested on Thursday and released by a federal magistrate judge in the Southern District of New York. Most Capitol riot defendants who aren’t charged with violent crimes — including Chapman — have been released from jail before trial.
CORRECTION: An earlier version of this story misstated what Chapman posted on his Facebook page.
Share

The shooting took place Saturday at the Westro