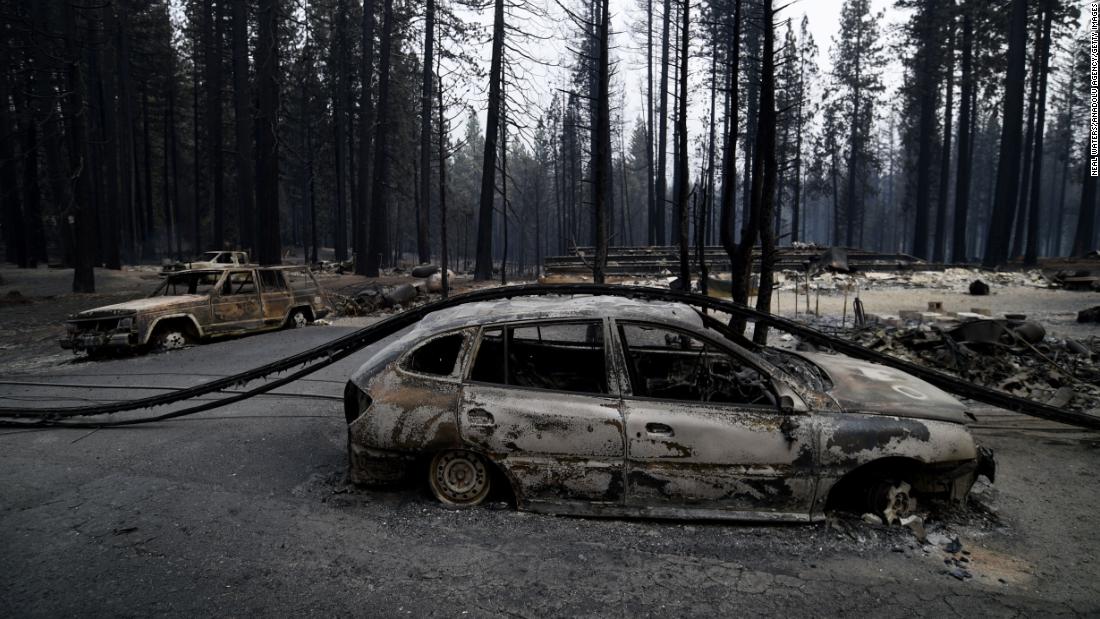 Eight days after the blaze broke out in El Dorado County, it has grown to 98,149 acres, according to an update Sunday morning from CAL Fire. It remains 0% contained, officials said, and full containment is not anticipated until at least August 31.
“This year what we’re seeing more than ever is a set of fuel conditions that many of our professionals that have spent their whole careers fighting fire have never seen before,” El Dorado National Forest Supervisor Jeff Marsolais said in a community briefing Saturday evening.
“The system is as taxed as it has ever been,” he said of firefighting resources. “And our folks on the ground are doing everything they can within their power.”
The fire grew Saturday due to an increase in wind activity, pushing the blaze to the east, where it crossed Highway 50 near Kyburz in El Dorado County, Dustin Martin, one of the Caldor Fire’s unified incident commanders, said at Saturday’s briefing.
The fire’s activity was more moderate overnight, officials said in Sunday’s update, after a red flag warning previously issued in the area expired late Saturday, though spot fires developed throughout the evening.
Red flag warnings are issued when conditions are perfect for wildfires to start and to spread.
Evacuation orders are in effect for residents in parts of El Dorado County. Evacuation warnings have been posted for parts of Amador County.

The Caldor Fire was just one of 94 large fires burning this weekend across 12 states, most of them in the western continental US, according to the National Interagency Fire Center, as the West grapples with an unprecedented drought. Together, they’ve burned more than 2.4 million acres.
One such blaze is the Dixie Fire, now the nation’s largest active wildfire and the second largest in California history at more than 721,298 acres, according to CAL Fire’s update Sunday morning. The fire is now 37% contained, 39 days after it became active.
Per CAL Fire, 1,247 structures — residential, commercial and otherwise — have been destroyed and approximately 16,000 structures remain threatened, though officials said damage assessment is still ongoing. The cause of the fire remains under investigation.
In their update Sunday morning, fire officials warned that Northern California “will likely experience an extended fire season,” with the fires burning in that part of the state “exhibiting extreme fire growth based on critical fuel conditions.”
“Under these drought conditions, wildfires are burning rapidly with extreme severity and have traveled up to 8 miles in a single day,” the update said. “Fuel conditions are much worse than previous years ,” it added. With the wind, this is contributed to “much greater fire spread.”
“Firefighters are experiencing conditions never seen before,” the update said.
Citing the “extreme fire conditions throughout Northern California,” fire officials said the US Forest Service in the Pacific Southwest Region was temporarily closing nine national forests, effective through at least September 6.
Approximately 41,000 California residents were under evacuation orders as of Saturday night, according to the California Office of Emergency Services.
At the time, there were 17 shelters opened for evacuees statewide, including two additional shelters opened for evacuees in El Dorado County and Douglas County, Nevada, along California’s eastern border.
Share