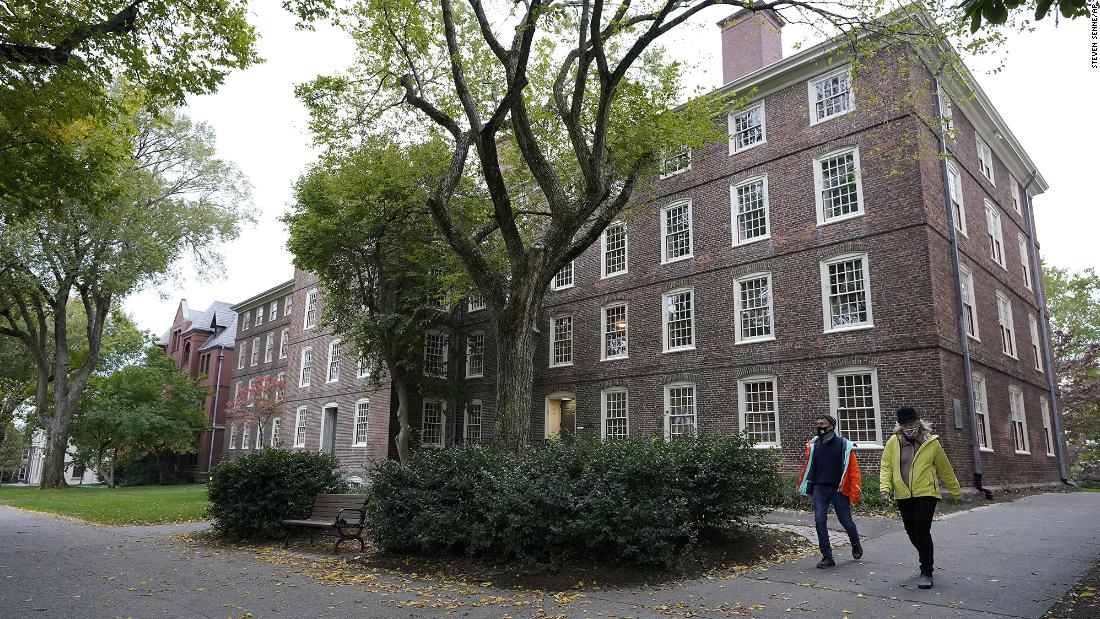 The vote comes at the recommendation of Undergraduate Council of Students (UCS) President Jason Carroll, who is himself a descendant on both sides.
Carroll told CNN he wrote a referendum to call upon the university to take action on the earlier report and used the document to manifest two questions that were voted on by the underclassman.

The report, released in 2006, was commissioned in 2003 by Brown’s first black president, Ruth J. Simmons, to look into the university’s ties to slavery and the transatlantic slave trade. In the final report, it was established that members of the school’s namesake Brown family took part in the slave trade, made many trips to Africa to enslave people in the West Indies and in the US, and owned slaves.
Carroll said that he had been thinking about report, and the subject, for a while and finally decided to bring it to vote in the UCS due to the “renewed attention of anti-Blackness here in the US.”
“We have a whole new direction as a nation, a whole new understanding of Black advocacy. I think before this past summer saying you support Black Lives Matter was honestly somewhat controversial,” Carroll said. “It wasn’t until the murder of Mr. Floyd and the protests last summer that it became something that was mainstream enough that universities like Brown would say it.”

Over 2,000 students wanted their voice heard

The vote called for preferential enrollment for individuals identified as directly tied to descendants of enslaved people and direct commitment of money to them, as well. For specific communities found to have direct ties to the slave trade, the vote asked for targeted investment, engagement efforts, recruitment in high schools with large Black student populations, and relationships and partnerships with colleges and universities near descendent communities, such as in southern states.
A total of 2,024 students voted when the final tally was taken Friday, and over 80% voted in support of reparations for descendants.
“The university gets to make up its own mind when it comes to the student body… but what’s important is getting the word out that the vast majority of students did approve of something. The ball is in the university’s court now,” Carroll said. “It’s really an expression of student sentiment.”
Carroll, a senior, said the richness of what Brown’s history can mean for communities affected by the slave trade and directly tied to the university. The vote on his referendum also called for more identification of those directly affected by the Brown family’s actions.

Carroll agreed that the vote provides accountability for statements the university has made and the action the students want to see.
“We can say what we want, but if aren’t willing to address the fact that Brown as a university has directly benefited from and participated in institutions it is now trying to unravel — that’s disingenuous,” he said. “I don’t think we can say we are trying to address any issue if we are largely ignoring the fact that we created that issue.”
The co-presidents of Brown’s Black Student Union, Lauren Wilson and Daneva Moncrieffe, echoed Carroll’s sentiments to CNN.
“Although we can’t all go back and change the past, both private and public institutions in the US have the opportunity and responsibility to reconcile the unaccounted for and unpaid labor that gave them their power by giving back to the communities they’ve helped marginalize,” Wilson said.
She continued with some examples for Brown, like encouraging more scholarships for Black students.
“Reparations to descendants of enslaved people is just one of many actions that Brown, a university occupying Narragansett and Wampanoag lands, can do to rectify the harm that it has done to vulnerable populations,” Moncrieffe said. “(The vote) also gives students at other institutions tied to the slave trade the platform to demand reparations and to address silenced histories.”
The university acknowledges the problematic past, and a school spokesman told CNN in a statement that it has been working to address it since the report’s release.
“Confronting questions of reparations and institutional reckoning with connections to the transatlantic slave trade has a deep history at Brown,” university spokesman Brian Clark said.
“The university interrogated this issue as a full community from 2003 to 2006, and Brown committed to a series of actions whose impact persists in our education, research, engagement with historically underrepresented groups and ongoing work in diversity, equity and inclusion. The current work of Brown’s Task Force on Anti-Black Racism will make recommendations on more Brown can do to address the legacy of slavery.”

Other universities have followed the same path

Georgetown University voted in 2019 to institute a reparations fund for the descendants of slaves who were sold.
A group known as the GU272 Advocacy Team has pushed through student government a bill that would create a new $27.20 fee every semester for all Georgetown undergraduates. The fee would go toward a reconciliation fund, which would be overseen by a board of students and descendants of the 272 slaves sold in 1838.
They estimate the fund would generate more than $400,000 a year and would “be allocated for charitable purposes directly benefiting the descendants of the GU272 and other persons once enslaved by the Maryland Jesuits,” according to the bill.
On March 16, the Jesuit Conference of Canada and the US, instrumental in founding Georgetown, pledged $100 million toward a $1 billion goal, money that will, in part, support descendants’ education.
Share