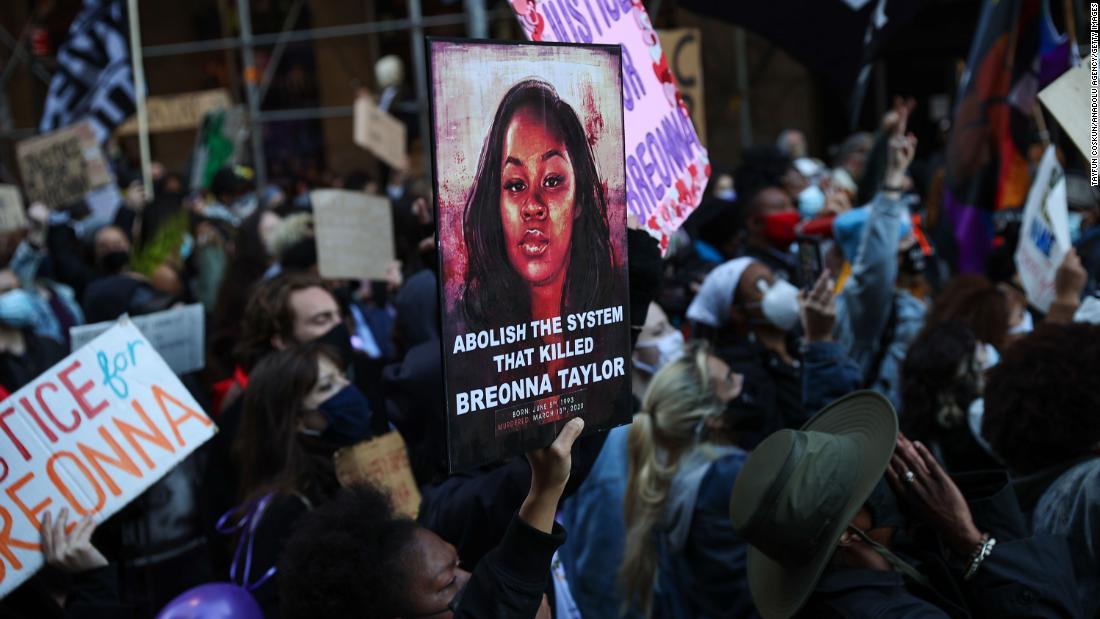 The legislation comes a little more than a year after the death of Breonna Taylor, a Louisville EMT who was killed by police in March of 2020 after they executed a no-knock warrant.
While there are conflicting reports between police and bystanders as to whether police announced themselves during the incident, her death spurred a national conversation about the use of this type of warrant.
The legislation doesn’t outlaw no-knock warrants outright, as the city of Louisville did last summer, but it does limit the circumstances in which these warrants can be used.
The bill, which was introduced in late February, was sent to Gov. Andy Beshear’s desk, where it awaits his approval. CNN has reached out to Beshear’s office to ask if he intends to sign the bill into law.
Some of the most notable changes in the bill from current procedure include reserving no-knock warrants for situations that could be considered violent or an emergency, such as a kidnapping.
The bill does leave some room for interpretation for these scenarios, but it requires these warrants be approved by a supervisor and the highest-ranking officer in the department. Consultation with the jurisdiction’s county-level attorney is also required by the legislation.
The bill also prohibits the warrants being executed between 6 a.m. and 10 p.m. and stipulates that they must be conducted by some type of special response team with a paramedic on site.
All officers must have clear identification and some type of body camera or audio-visual equipment activated during the process.
CNN has reached out to the Kentucky State Fraternal Order of Police for comment on the substance of the bill.

Bill comes with some limitations

Some of the new rules, like the timing of executing the warrant, has a clause that allows police to bypass them under “exigent circumstances,” or an emergency situation.
Many of these restrictions also do not apply to counties with a population under 90,000 people, one of the weaker parts of the bill, according to Michael Bassi, interim director at the Southern Police Institute.
While Bassi said he understands that is an economic and resource issue for smaller counties, it concerns him that only nine out of Kentucky’s 120 counties have a population bigger than 90,000.
“I understand it from an economic standpoint, but on the other side, I would like to see something about resource management and sharing resources,” Bassi told CNN.
Still, the bill is a “really good first step,” he said.
But Dr. Pete Kraska, a criminologist at Eastern Kentucky University, told CNN that his biggest concern is the lack of specificity in what is and isn’t acceptable for these warrants, or the potential that officers will do the no-knock procedure without asking for the warrant.
Historically, these types of warrants have been used for minor drug infractions, and it absolutely will curtail its use if the bill is passed, he said. But what he thinks is more likely to happen is that officers will not try to get a no-knock warrant and then cite “exigent circumstances” after using no-knock techniques.
Ideally, legislation would spell out all the specific circumstances in which these warrants can be used, he said, like terrorist or hostage situations. This would make their use exceptionally rare, he said, which he doesn’t think is true under the current version of the bill.

Taylor’s family members, who have been vocal in the last year about enacting restrictions or an outright ban, said that while this bill wasn’t their ideal, they hope it will save lives.
“Breonna Taylor’s family is encouraged by the legislation that was passed significantly limiting the use of no-knock warrants throughout the state of Kentucky,” Lonita Baker, an attorney for the family, said in a statement.
“While a complete ban, similar to the Breonna’s Law that was passed in the city of Louisville, was our hope, the family does believe that SB4 [Senate Bill 4] which is now prepared to be signed by the governor will save lives in the state of Kentucky.”
While the bill was overwhelmingly passed with both Republican and Democratic support, some state legislators had mixed feeling about it.
“I don’t think anybody thinks that this bill is perfect, but I think it is a really good start,” said Minority Whip Representative Angie Hatton during the House’s floor discussion of the bill.
State Rep. Attica Scott, who previously introduced a more restrictive version of the bill, took to Twitter and explained her “Yes” vote despite it not being the bill she wanted.
“SB 4 is not Breonna’s Law,” she said in a tweet on March 30. “It falls short of the people’s demands and is another example of performative politics. It gets us closer to justice, but this ain’t it. I voted Yes because daughters like mine deserve a chance to live without wondering if they will be next.”
The ACLU of Kentucky characterized the bill as a “win” but said that more was needed to radically change policing.
“This law is an excellent first step in reimagining the role of police in community safety, though it in no way provides justice for Breonna Taylor or the degree of policy change the community needs,” said Keturah Herron, a policy strategist at the ACLU of Kentucky. “This is a win, but the fight is not over.”
Share