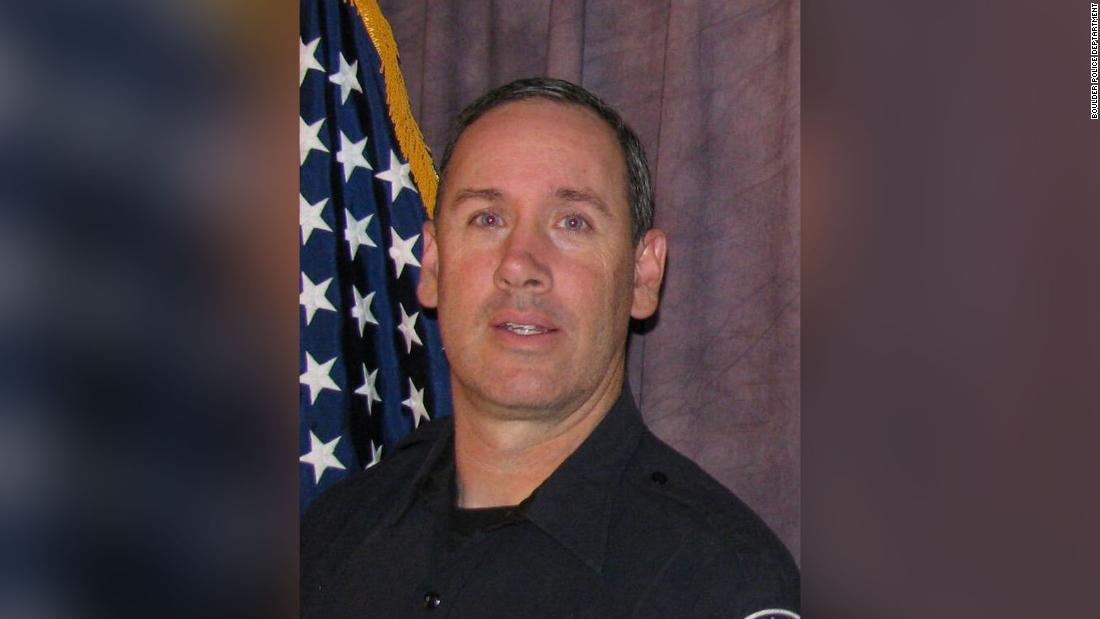 “This is part of that bravery, in that, rightfully so, everyone in that store that fateful day … was trying to get out,” Father Dan Nolan, parochial vicar at Our Lady of Mount Carmel in Littleton, told mourners, including the slain officer’s family and scores of law enforcement officers.
“But some were trying to get in. It was all of you — officers, lawmen, law enforcement. Going into harm’s way, going into the mouth of hell. And one did not return. So this is for you.
“That is a risk every day you put on your badges and take that risk. A day like any other day. Officer Eric Talley put on his badge, put on his uniform, put on his duty belt, not knowing that would be the last time.”
Nolan read a poem written by Talley’s children for Christmas in 2019. It began, “Dad, our unsung hero.
You never count the cost
Whatever we need is never too much
But our praises have not been enough…”
Boulder Police Chief Maris Herold remembered that Talley became a cop at the age of 41 after a career as an IT professional.
“Eric didn’t need to become a police officer,” she said, “but he felt a higher calling.”
His bravery and quick action, the chief said, saved dozens of innocent lives a week ago.
Sgt. Adrian Drelles, Talley’s supervisor, said the officer’s children are “a direct reflection” of their father.
“His kids are living legacy of Eric’s impact on this world,” Drelles said. Talley’s children “gave him comfort” as he broke the news of his death to their mother, Drelles said.
Colorado Gov. Jared Polis recalled Talley’s sacrifices, large and small.
“Officer Talley gave his life just as he lived it: in the service of others,” the governor said. “Although it will be painful, it’s also a joy to remember Officer Talley for who he was. It’s a sign of a life well lived when you’re beloved like Officer Talley.”
After the service, the flag that draped Talley’s casket was gently folded. A final ceremonial “end of watch” broadcast was made in honor of the officer.
A bagpipe rendition of “Amazing Grace” could be heard after a 21-gun salute outside the large church.
Earlier, members of the Colorado Emerald Society Pipes and Drums played as Talley’s casket was carried into the church. Law enforcement officers left blue roses nearby before stopping briefly to salute their fallen colleague.
A procession and motorcade preceded the memorial service at Flatirons Community Church for the fallen Boulder police officer, husband and father of seven who was known as a prankster and who loved “family more than anything,” in the words of his father, Homer.
Along the route, Coloradans and visitors from other states gathered, bundled against temperatures in the lows 30s. Some waved American flags and saluted under cloudy skies, according to news footage.
“There are not enough people supporting our our officers,” Angela Stephens, who flew from Kansas City to pay her respects, told CNN affiliate KMGH. “We all need them. We need the police. “
Holding an American flag, Stephens added, “I wouldn’t miss this for anything.”
Talley had been a Boulder police officer since 2010.
When the call came a week ago Monday about a man wielding a weapon at the grocery store in Boulder, the 51-year-old Talley was the first officer on the scene. And he was the final person shot in the rampage, according to police. Talley and nine other people were killed when, according to police, suspect Ahmad Al Aliwi Alissa opened fire at the crowded King Soopers store.
President Joe Biden last week offered his condolences to the families of the victims of the Boulder shooting, and singled out Talley’s heroism.
“I commend the exceptional bravery of Officer Eric Talley,” he said. “I send my deepest condolences to his family. His close, close family of seven children. You know, when he pinned on that badge yesterday morning he didn’t know what the day would bring. I want everybody to think about this.”
The President added, “But when the moment to act came, Officer Talley did not hesitate in his duty, making the ultimate sacrifice in his effort to save lives. That’s the definition of an American hero.”
No one, other than Talley, was shot once he and other officers started engaging the gunman at the King Soopers store after witnesses called 911, Boulder police said.
Talley was “willing to die to protect others” and embodied “everything policing deserves and needs,” Herold said.
Talley and his family were in the police chief’s office about three weeks ago as one of his sons accepted an award.
The officer had taught his family CPR, and his son used that skill to help save a family member who had swallowed a quarter, Herold said.
Talley was the first Boulder police officer to be killed in the line of duty since 1994 and the sixth on-duty death in the department’s history, according to the National Law Enforcement Officers Memorial Fund.
Last Wednesday, hundreds of Coloradans lined the streets as a hearse transported Talley’s body from the coroner’s office to a funeral home in Aurora. Many placed their hands over their hearts and some held American flags. Public safety vehicles joined the long procession.
Talley’s patrol vehicle, which was parked in front of the police station last week, became a shrine as mourners left flowers, wreaths, cards and other mementos in his honor.
Boulder Police last week used Talley’s handcuffs to formally place the shooting suspect into custody at the hospital where he was treated for a gunshot wound, police said in a tweet Thursday.
“This week several Boulder Police officers & others responded to a local hospital to formally place Monday’s shooting suspect into custody,” police said in the tweet. “As they did, officers informed him the handcuffs used that day were those of Officer Eric Talley. The suspect was then taken to jail.”

CNN’s Chris Boyette and Konstantin Toropin contributed to this report.