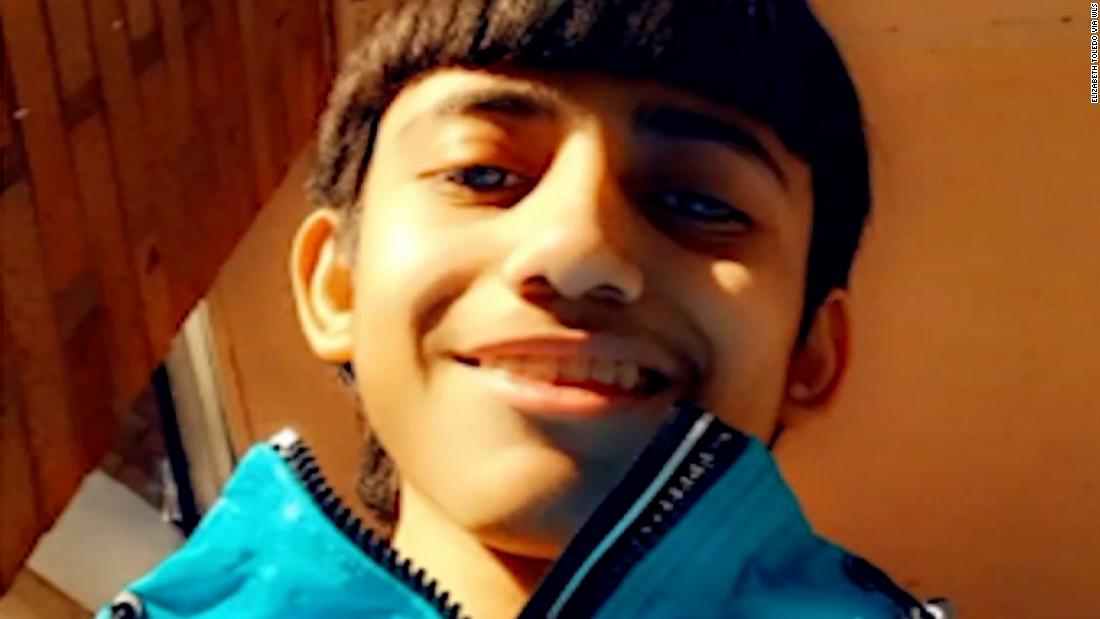 Police say what was in Toledo’s hand is a gun that was later recovered from behind the fence where the chase ended.
Prosecutors, in charging a 21-year-old man who was with Toledo at the beginning of the police encounter in the early morning hours of March 29, said the gun recovered a few feet from the boy’s body matched shell casings located where police were summoned moments earlier, and that Toledo’s hand and gloves dropped by the older man had tested positive for gunshot residue.
Body-worn camera videos were released by Chicago’s Civilian Office of Police Accountability, the police oversight agency that reviews incidents in which an officer fires a department issued handgun. Documents released by COPA identify the officer who fired his weapon as Eric Stillman, who is 34 years old. The Chicago Police Department also released a video compilation of surveillance footage from a nearby school and church.
The video, according to police, shows a gun in Toledo’s right hand as he nears an open area of fence next to an empty lot. Toledo turns to his left, toward the officer, and what police say is the gun disappears behind his right side. Toledo begins to raise his hands as he’s facing the officer when the officer fires his weapon.
From the time police said the gun was first visible on body-worn camera footage in Toledo’s hand, to the time the officer fired his weapon, was eight tenths of a second. In that period of time, his right arm disappears behind the fence before he begins to raise both hands.
Chicago’s mayor, Lori Lightfoot, released a joint statement with Toledo’s family and held a press conference Thursday afternoon calling the video “difficult to watch.” The Chicago Police Department would not answer questions about the shooting but released a slowed-down video that highlights a portion of the interaction between the officer and Toledo.
“At the time Adam was shot, he did not have a gun. OK?” his family’s attorney, Adeena Weiss-Ortiz, told reporters Thursday afternoon. “In that slo-mo version (of one of the videos), whatever he had in his, in his hand, whether it was a gun or something else, there was something in his hand, he approaches the fence, he lets it go, he turns around, and he’s shot.”
“It could be a gun. I’m not going to deny that, that it could be a gun, but I can’t tell you with 100% certainty, until I have that video forensically analyzed and enhanced,” the attorney continued. “But it is not relevant, because he tossed the gun. If he had a gun, he tossed it.”
Timothy Grace, a union lawyer representing Stillman, said the case was tragic but his client was placed in a situation where he was “left with no other option.”
“The juvenile had a handgun in his right hand, given verbal direction, told to drop and stop and to adhere to the police officer’s valid, lawful orders and the juvenile begins to turn,” he said. “At that point (the officer) has no cover, no concealment, he’s left with no other option.”
“He feels horrible about the outcome. He feels horrible he had to use deadly force. No police officer wants to use deadly force in the line of duty. He was well within his justification of using deadly force, he just feels horrible.”
The entire incident lasts about ten minutes, from the dispatch of gunfire that police were alerted to by the city’s gunfire detection technology about 2:36 a.m., to the point where Toledo is pronounced dead at the scene at 2:46 a.m.

‘Eight rounds, corner on the street’

Police in the area were alerted to the sound of gunfire that was picked up by the ShotSpotter technology the city uses to alert officers to gunfire almost instantly, often a minute or more before 911 calls are able to be broadcast over the police radio.
Officers responding to the area were told eight shots had been fired, according to police radio traffic released by authorities. The entire encounter between the officer picks up less than two minutes into the video and lasts less than 20 seconds, after the officer who shot Toledo opens the door to his police cruiser and starts chasing the 13-year-old and 21-year-old, identified by authorities as Ruben Roman.
Footage shows Stillman catching Roman and then passing him off to his partner while he continues to chase Toledo. Surveillance camera footage that was recovered and released by police shows the officer closing the distance with Toledo as they both move down the alley.
On the body camera, the officer can be heard repeatedly shouting at Toledo to “stop,” and then “show me your f**king hands.” The officer chasing Toledo can be heard on the radio transmission that he’s chasing someone who’s “holding his waistband.”
Seconds later, the officer says police fired shots and asks for a medical kit.
According to a Chicago Police Department source familiar with the investigation, the flashlight that can be seen on the officer’s body-worn camera footage is mounted to his gun and is trained on Toledo as the pursuit ends near a fence, and the officer had his gun drawn during the chase because they were responding to the sound of gunfire as picked up by the city’s gunfire detection technology.
After firing the shot, the officer is heard on the body camera using his radio to ask for an ambulance. “Shots fired, shots fired, get an ambulance over here now,” he said.
The officer can be seen straightening out Toledo’s legs, raising his shirt to start searching for a gunshot wound after asking Toledo where he’s shot, and to look at him. Toledo’s moving but does not appear to respond to the officer. Stillman asks for any officer carrying a medical kit to bring material to seal a chest wound.
The officers begin to attempt to seal his chest wound and attempt CPR. The officers first to Toledo try to keep him awake as sirens can be heard closing in on the scene. Stillman said he didn’t feel a heartbeat.
As more officers arrived, another officer takes over for the one who fired his weapon. He then shines a flashlight behind the fence, where a gun is resting on the ground.
Roman, the 21-year old man with Toledo at the time, was arrested and later charged with felony reckless discharge of a firearm, felony unlawful use of a weapon by a felon, felony endangerment of a child, and a probation violation warrant.
Video from Stillman’s partner doesn’t capture the sound of the gunfire, but shows the officer handcuffing Roman as he’s face down on the ground. He dropped a pair of red gloves that tested positive for gunshot residue, prosecutors said.
As part of the investigation, prosecutors said Toledo’s right hand tested positive for gunshot residue and a Ruger 9MM semi-automatic pistol was recovered near the fence where Toledo was killed.
The Toledo family attorney said the family is currently exploring next steps and did not rule out potential legal action against the officer or the City of Chicago.

In a news conference Thursday ahead of the video’s release, Chicago Mayor Lori Lightfoot said she had seen the videos and they are “incredibly difficult to watch.” Her office also released a joint statement with Toledo’s family. It’s rare for the city to coordinate statements over incidents in which the city may face a lawsuit from the other lawyer.
In the joint statement Thursday, the mayor’s office and the attorneys for Toledo’s family said they met Wednesday and “both parties agree that all material should be released, including a slowed-down compilation of the events” that resulted in Adam’s death.
Lightfoot did not say whether she thought the shooting lawful or within the police departments use-of-force guidelines. As mayor, the department’s chain of command leads to the superintendent, who reports to her.
“I don’t want to get into the real substance of this because the independent investigation is going on, but I’ve seen no evidence whatsoever that Adam Toledo shot at the police,” Lightfoot said.
The department’s use of force guidelines do not specify that officers must first face gunfire before deadly force is authorized. The order states deadly force “objectively reasonable, necessary, and proportional to the threat, actions, and level of resistance offered by a person, under the totality of the circumstances.”
A report completed by a police department supervisor, required when an officer uses force, noted Toledo didn’t follow verbal direction, fled, was an imminent threat of battery with a weapon and used force likely to cause death or great bodily harm. That report noted he was armed with a semi-automatic pistol.
Toledo’s family saw the video on Tuesday and asked that the video and other evidence not be immediately released to the public, according to a statement this week from the Civilian Office of Police Accountability, but then agreed to a release of video and other material alongside the police department’s slowed-down version of the video. COPA’s policy typically dictates release of camera footage, audio and other reports within sixty days.
“COPA has remained sensitive to the family’s grief and is carrying out this release in accordance with the City’s Video Release Policy,” it said in a statement Wednesday. “COPA’s core values of integrity and transparency are essential to building public trust, particularly in incidents related to an officer involved shooting, and we are unwavering in our commitment to uphold these values.”
Clarification: An earlier version of this article should have attributed to Chicago police that body-worn camera footage released by authorities shows that less than a second passed from when a 13-year-old boy is seen holding a handgun and an officer fires a single, fatal shot that hits him in the chest.

Denmark has reported that two hospital staff me