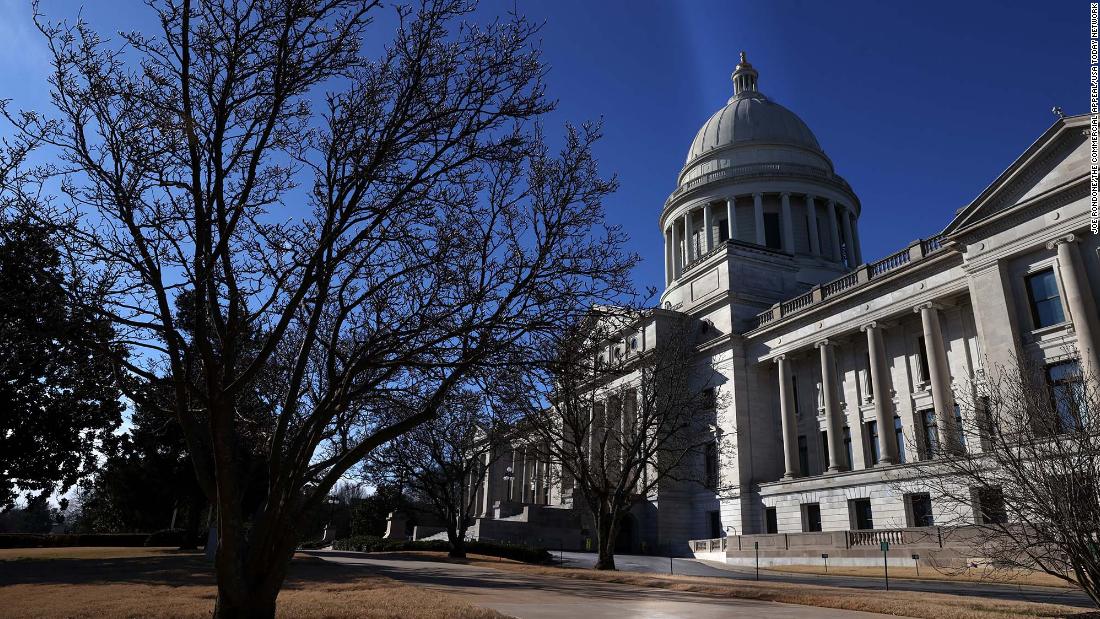 The state’s Republican-controlled House voted 71-24 to override Republican Gov. Asa Hutchinson’s veto of HB 1570 Tuesday afternoon, with the Republican-controlled Senate overriding his veto by a vote of 25-8 shortly after.
The new law represents a significant step backward for trans Americans fighting for equality in Arkansas, and it comes as Republicans in a number of states push other policies aiming to restrict trans people from participating in common activities, like high school and college athletics. Tuesday’s action was swiftly denounced by LGBTQ advocates, who vowed to mount a legal challenge against the law.
The Arkansas Save Adolescents from Experimentation (SAFE) Act passed the state Senate late last month by a vote of 28-7. The state House had passed it in early March by a vote of 70-22.
With the new law, young people will not be able to access puberty-blockers, a treatment option for transgender youth that is used to prevent the onset of puberty.
The law bans ​so-called cross-hormone therapy,​ a gender-affirming treatment that allows for trans people to ​change their physical appearance to be more consistent with their gender identity. In this treatment, they receive hormones that may aid in redistributing body fat to different parts of the body and accelerate or slow body hair growth. The hormone estrogen can produce breast tissue and halt sperm production, and testosterone tends to stop menstruation and increase sex drive.
The bill makes what it calls an “exception” for some intersex people with unspecified chromosomal makeup and hormone production, and those with difficulties resulting from previous gender-affirming treatments.
Hutchinson vetoed the legislation on Monday, calling it “a product of the cultural war in America,” and arguing it creates “new standards of legislative interference with physicians and parents as they deal with some of the most complex and sensitive matters involving young people.” The governor told reporters following his veto that he expected legislators to override it.
CNN has reached out to the bill’s sponsors for comment.
Arkansas state Rep. Robin Lundstrum, a Republican who proposed the Arkansas SAFE ACT, has made comments that contradict the science of gender identity and falsely positioned trans and nonbinary identities as a “choice.”
“Those kids are precious. Some of them may choose to be transgender when they’re older. That’s OK, that’s their choice,” Lundstrum said during a House panel prior to passing the bill, as an explanation for why she supports denying them gender-affirming treatment. “But when they’re under 18, they need to grow up first. That’s a big decision, there’s no going back.”
Some medical groups, including the American Psychiatric Association, have come out against laws like HB 1570, with the group saying last week that “patients and their physicians, not policymakers, should be the ones to make decisions together about what care is best for them.”
LGBTQ and medical advocates strongly opposed the legislation, which they feared could have significant negative impacts on trans youth, who have a much greater risk of suicide, according to the US Centers for Disease Control and Prevention. More than a dozen states have considered bills similar to the Arkansas SAFE Act this year alone, according to the American Civil Liberties Union’s anti-trans bill tracker.
Following the veto override, the Trevor Project, a suicide prevention and crisis intervention organization for LGBTQ youth, warned in a statement that trans youth in the state “would be put at significantly increased risk of self-harm because of legislation like HB 1570 pushing them farther to the margins of society.”
The ACLU, meanwhile, said the law “will drive families, doctors and businesses out of the state and send a terrible and heartbreaking message to the transgender young people who are watching in fear.”
“The ACLU is preparing litigation as we speak,” said Chase Strangio, the deputy director for transgender justice with the ACLU’s LGBTQ & HIV Project, in a statement. The Human Rights Campaign, one of the nation’s largest LGBTQ rights groups, also said in a statement that it will “use every tool at our disposal to fight against this law.”
This story has been updated with additional information.

CNN’s Kay Jones and Lauren Holt contributed to this story.

Nine other people were hurt by shrapnel and de