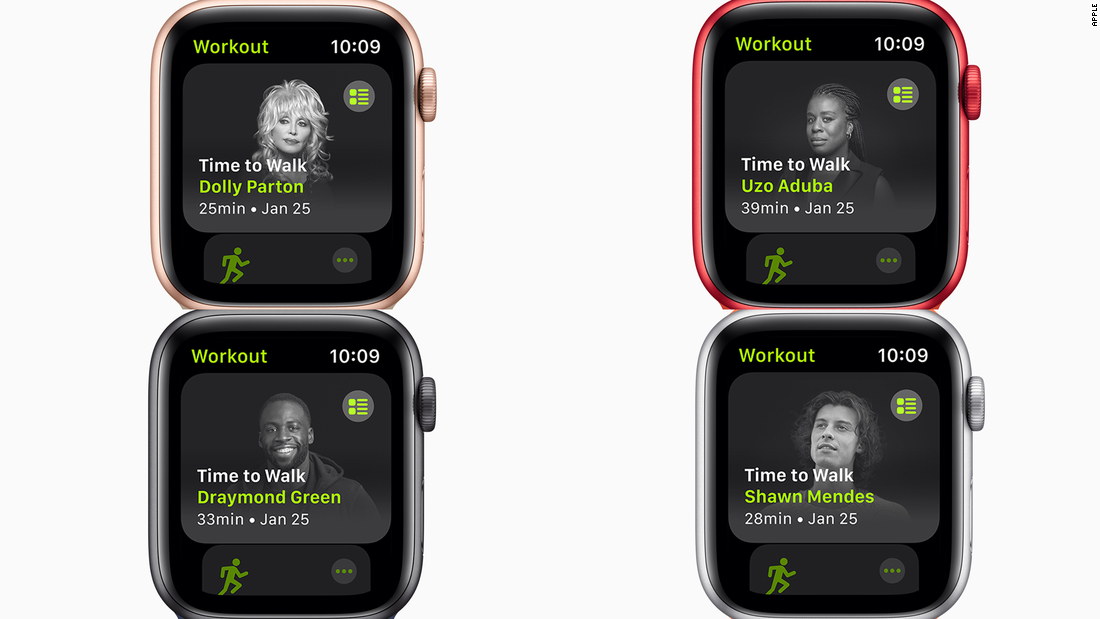 “Especially over the last few weeks, I’ve been starting my day by going for a walk, clearing my mind and leaving my phone,” he says. “Sometimes I get a little woo woo and touch the plants.”
Mendes says walking about 25 minutes a day serves not only as a meditation practice but a way to “let the noise fall out of my ears,” so he’s more present around the people he loves. When he recalls the pressures of being in the studio, a photo appears on my Apple Watch of Mendes holding a guitar.
Mendes is keeping me company on my walk as part of Apple (AAPL)’s new Time to Walk audio program for the Apple Watch. The unscripted series, where celebrities like NBA player Draymond Green, actress Uzo Aduba and country star and Moderna vaccine hero Dolly Parton, features personal stories as they go for walks in their neighborhoods. 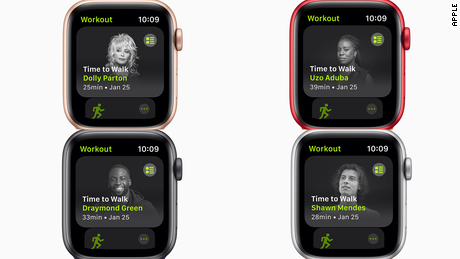 New episodes of Time to Walk, which launched on Monday, will appear in the Workout app each Monday through the end of April. (The timing for potential future episodes after “this season” have not been announced.) For Apple Watch users who use a wheelchair, Time to Walk becomes Time to Push, which tracks “roll” goals instead of steps.
It’s the latest move from Apple to add exclusive content to attract new users to its fitness products and compete with companies like Peloton.
Last month, Apple launched Fitness+, a $9.99 monthly Apple Watch subscription pservice with workout videos, such as yoga, dance and strength training, that can be accessed from an iPad, iPhone or Apple TV. User data, including calories burned and heart rate, are displayed on screen in real time. For years, Apple has been working to turn its watch into a health and wellness hub, allowing users to monitor daily vitals, but also log data for studies related to diabetes, Parkinson’s and dementia.
For me, walking has always been my preferred way of moving: low-impact and free. Having some familiar voices walking at the same time feels like a personalized spin on a podcast (although Apple never uses the p-word). I can even hear Mendes taking deep breathes in just as I do.
In Parton’s sessions, I hear the background noise of birds as she talks about her Tennessee farm. “During this time, Covid and all that, I know a lot of you can’t get out and walk like you do normally, and I’m sure a lot of you feel confined,” says Parton. “But I know how important it is to be able to walk. So even though we can’t get out and walk around all the places we’d like to this day and time. … I can still take you down on a walk on memory lane. Hopefully with us walking together we’ll feel a little more freedom.”
She tells me she does a lot of writing while walking and the backstory of her famous “9 to 5” song; I listen intently to her tapping her own acrylic fingernails so it sounds like a typewriter for rhythm in the background, something I didn’t know until today.
When NBA player Draymond Green recalls how the Golden State Warriors celebrated a championship win, it’s “Big Rings” by Drake that takes him back to the locker room. It’s one of three songs he intros and plays on his episode, which also includes a beautiful story about a walk he took after failing a class and getting into an argument with his mother. He talks about the sounds of the Malibu waves in the distance and the cars on the highway nearby.
Although Time to Walk is no substitute for a stroll with a good friend, it’s intimate storytelling is a welcomed change to walking alone.
Share

“Well, Hitler did a lot of good things,&