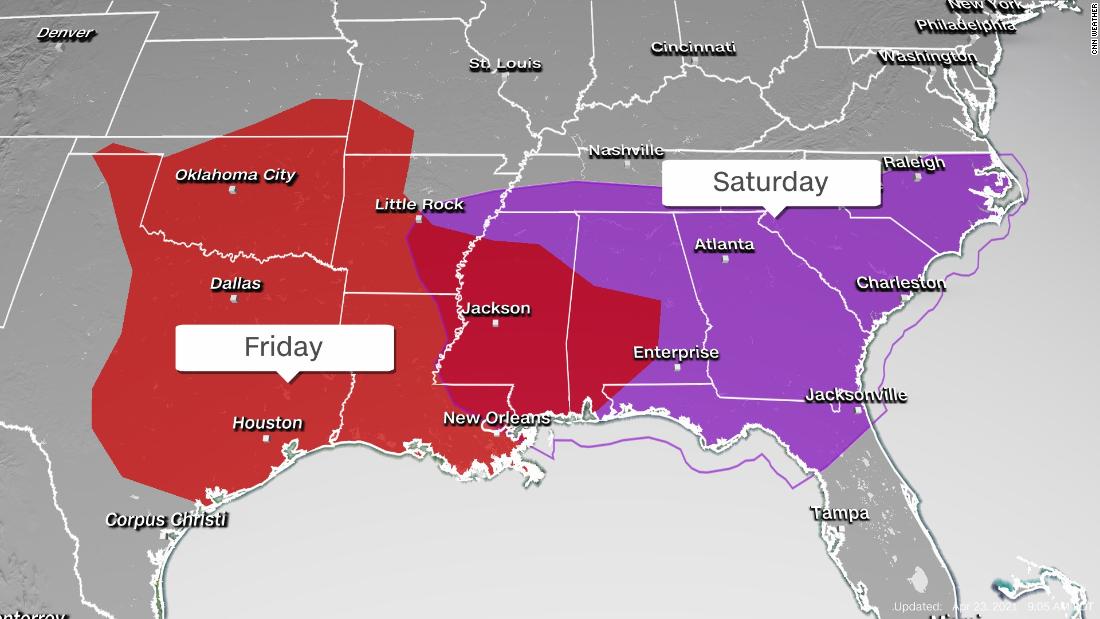 There is an enhanced risk for level 3 out of 5 severe weather for more than 5 million people living in portions of four states — Oklahoma, Texas, Louisiana, and Mississippi — for Friday evening and nighttime, according to the Storm Prediction Center (SPC). This includes Okahoma City, Baton Rouge and Lafayette in Louisiana, and Tyler and Wichita Falls in Texas, where there is an elevated threat for a tornado and damaging winds.
A tornado watch is in effect until 9 p.m. CT for southeastern Texas and southwestern Louisiana, including Houston and Lake Charles. This means environmental conditions are favorable for a few tornadoes to form.
A severe thunderstorm watch is in effect until 8 p.m. CT for portions of southern Oklahoma through central Texas, including Dallas and Austin. The SPC says wind gusts up to 70 mph, large hail and a tornado or two are possible with some of the storms in this watch.
The elements will be present to spur this kind of severe weather: “We are now in the middle of severe weather season with cold air and warm air battling for supremacy,” said CNN meteorologist Chad Myers. “We know that the warmth of summer will eventually win out, but the cold air is not going down without a fight.”
Showers and thunderstorms will form midday across central and eastern portions of Texas and much of Oklahoma. By the mid-afternoon, strong thunderstorms will develop, some of which will likely turn severe. Dallas, Austin, Oklahoma City and Houston are expected to see these storms.
A large cluster of heavy rain and thunderstorms will evolve as precipitation tracks east, impacting eastern Texas and Oklahoma through the Gulf Coast states, including Louisiana, Mississippi and Alabama Friday evening and into the nighttime hours.
There could be a second round of storms that forms in central Oklahoma and tracks east Friday evening, so several hours of severe thunderstorms are possible in this part of the Plains, with tornadoes among the threats.
Since this severe threat continues throughout the overnight hours of Friday, it is important to have weather alerts set on your phone so you are woken up if any bad weather immediately threatens your town.

Saturday, the risk for dangerous storms shifts into the Southeast as one or two strong lines of thunderstorms quickly moves across the region, from Louisiana and Mississippi through Georgia and South Carolina.
The SPC has set a level 3 out of 5, enhanced risk of severe storms in place for portions of Alabama, Georgia, Florida and South Carolina on Saturday.
“All severe hazards appear possible, including large hail, damaging winds, and a few tornadoes,” said the SPC.
This includes the potential for two-inch hail and damaging downbursts, the SPC adds in their discussion.
The model guidance does suggest the first line of storms, which will drive the severe threat Friday night into Saturday morning across the Gulf Coast states, should weaken by midday Saturday, but a final round of severe storms could develop Saturday evening into Saturday night.
“The severe weather solution for Saturday is still in question with models differing in the location of a potential outbreak. It would be wise to check Saturday morning’s forecast before making any outdoor plans across the Southeast,” said Myers.
That last round of storms could form across portions of Mississippi, Alabama and Georgia around sunset Saturday and will shift toward the east coast, reaching the coastal Carolinas early Sunday morning.

Along with the severe weather, there is the risk for localized flooding, especially from eastern Texas through central Alabama Friday night.
“In addition to the severe weather, locally heavy rainfall will be possible, especially in areas where thunderstorms train. This could lead to some isolated flash flooding,” said the National Weather Service office in Shreveport.
These storms are forecast to produce a widespread, 2-4 inches of rainfall across the South.
Severe weather in the US should settle down Sunday and Monday, but the Storm Prediction Center suggests a return on Tuesday for parts of the southern Plains: “Confidence remains high that severe thunderstorms will impact the central and southern Plains on Tuesday. [Forecast variables] continue to suggest the potential for supercells capable of all severe hazards.”
Share

Michael Osterholm, director of the Center for