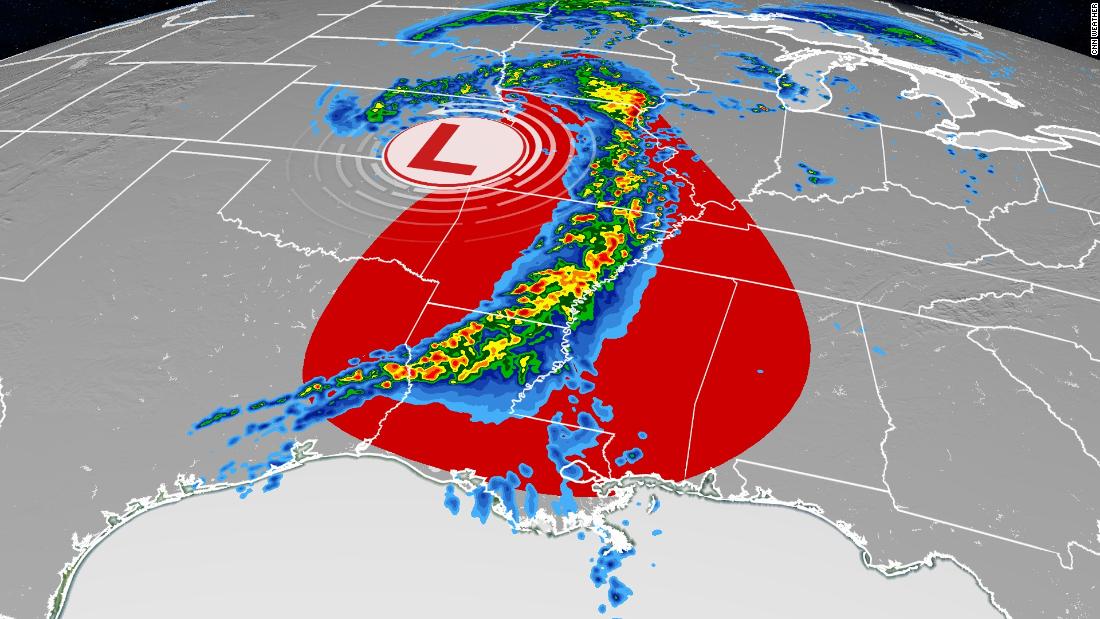 “The risk today runs from Iowa to the Gulf Coast. Storms to the north have a higher risk of wind damage and storms farther south will have a higher threat of tornadoes. All will have dangerous lightning and even potential flooding,” said CNN meteorologist Chad Myers.
The Storm Prediction Center has issued a Level 3 out of 5, “enhanced risk” alert for severe weather through tonight for northern Louisiana, eastern Arkansas, west-central Mississippi and southwestern Tennessee. This risk level means “numerous severe storms (are) possible,” according to the center.
The environmental conditions could “lead to rapid upscale growth into a broken band of storms and embedded supercells as the afternoon progresses,” said the National Weather Service in Little Rock. This type of thunderstorm — supercells — are most known for producing tornadoes, but not all of them do.
Low pressure located over the Central Plains will contain a cold front draped to its south and east. This cold front will be the main instigator for storms as it moves east.
The middle and late afternoon will become more active and dangerous.
A tornado watch is in effect until 8 p.m. CDT for more than 4 million people across parts of southeastern Oklahoma, northeastern Texas, northwestern Louisiana and much of Arkansas. This includes Little Rock and Fort Smith in Arkansas and Shreveport in Louisiana.
By Wednesday evening, the storms will move through the lower Mississippi River area, still containing the potential for all modes of severe weather. Intense storms could be possible as far north as Iowa and as far south as the southeastern Texas and southern Louisiana coasts.
Storms will work eastward into early Thursday toward the Southeast, but much of the severe weather threat should diminish by then.
Flash flooding is also a concern, with a widespread 1 to 2 inches of rainfall expected — but localized amounts could be closer to 2 to 4 inches.
“Soil saturation and streamflows have come down significantly from where they were a week ago, but nonetheless still looking at above average soil saturation,” the Weather Prediction Center said of the current conditions in parts of Arkansas, Tennessee and Mississippi, where flooding is possible from the storms through tonight.
Some of these storms, especially on the southern extent of the line across parts of Arkansas and Kansas, could be training. Storms that train mean they are moving over the same locations for an extended period, making the flooding risk worse.
Strong storms remain in the forecast through the end of this week. The prediction center is warning isolated severe storms could be possible from central Tennessee through southeastern Louisiana and the western Florida Panhandle on Thursday.
A new storm system will then move into the country, and another significant severe weather threat could be possible across the South from Friday into Saturday.
These storms could produce tornadoes along with damaging winds and hail, but the forecast remains uncertain in terms of timing and which areas are at the greatest risk from these storms.